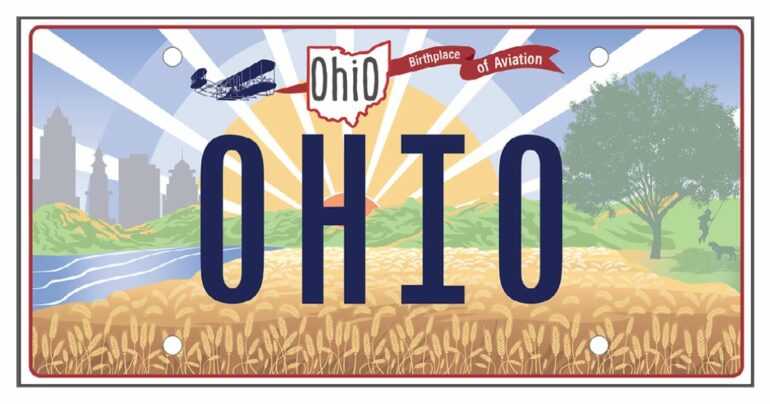 The Ohio Bureau of Motor Vehicles announced two new license plates last week, one that had a huge mistake and another that fixed that mistake but left people feeling underwhelmed.

The new license plate is sort of a reimagining of the old “Beautiful Ohio” plates from 2009-2013, but the first version the BMV released had one glaring issue.

The airplane honoring the Wright Brothers towing a banner reading “The Birthplace of Aviation” was backwards. After the error was promptly pointed out on social media, the BMV attempted to redeem themselves by re-releasing the new plates, this time with the plane flying in the correct direction.

We are aware that the plane on the new Ohio license plate unveiled this morning was oriented in the wrong direction. We regret this mistake and have fixed the image. This is the correct design that will be reflected on all new plates issued to Ohio drivers. ⬇️ pic.twitter.com/HAire7kr9M

But the damage was done. Even North Carolina got in on the fun, continuing the longtime aviation fued between the “Birthplace of Aviation” state and the “First in Flight” state.

Y'all leave Ohio alone. They wouldn't know. They weren't there. #FirstInFlight ✈️https://t.co/bKL1TlT1Z8

Even after the mistake was corrected, people were quick to point out that the design for the plates was unoriginal.

How about fixing the rest of this monstrosity too? There’s a swing attached to leaves at best, a skyline no one recognizes, every state has the sun, and how about corn or soybean… you know, the major crops of OhiO (who wrote that anyway, a 4 year old? OhiO)

Im gonna go ahead and speak for all Ohioans here….just keep the plates white. This is atrocious

It’s still a failure on so many levels. The perspective is mismatched between the lines in the sky and the field. It’s far too busy. I’m not entirely sure it’ll be legible. And it’ll be a joke of a plate. Can we try again please?

The plates are certainly disappointing, but let’s look on the bright side. At least, for now, cars are only required to have one.