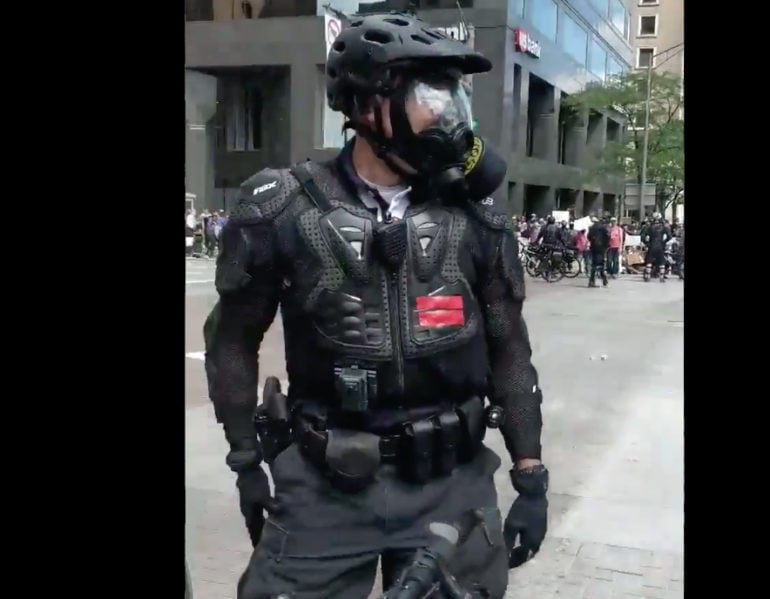 Out Of Control Columbus Police : 24 Instances Of Police Vs. Protestor Violence

Mayor Ginther, at the press conference announcing a citywide curfew and National Guard deployment, commended the Columbus Police Department for their restraint during protests in recent days.

Mayor Ginther is not one for criticizing police, but that “restraint” he’s lauding has included the macing of City Council President Shannon Hardin and Rep. Joyce Beatty, along with numerous examples of police acting aggressively towards protestors (see update at bottom). Here are numerous examples – we’ll update if more surface.

July 28: (scroll down for previous incidents)

Use of pepper spray at close range, following detainment and removal of eye protection

After detaining her, officers proceeded to remove her protective goggles and face mask. An as of yet unidentified officer then peppered sprayed her directly in the eyes from only a few inches away. pic.twitter.com/72ihnw70pN

Woman seemingly arrested for picking up balloons in street

I wonder how the cops will lie about why they arrested this woman last night after she volunteered to help clean up balloons. Notice she is still standing on the sidewalk. pic.twitter.com/QIBMJ632LX

NOW: Things have taken a turn here. Police came to intersection and tried to push crowd out with bikes. This happened. @nbc4i pic.twitter.com/HnHxYWkR0l

From a livestream in Columbus OH. Macing and shoving protestors after they've been beaten with bikes onto the sidewalk. pic.twitter.com/NsjXy09iBl

Video of Columbus Police being violent towards protesters downtown, not even a week after @MayorGinther said pepperspray would not be used against protestors. #ResignGinther #FireChiefQuinlan pic.twitter.com/g1AGKhhYKG

From Dispatch coverage:
Columbus police Commander Smith Weir said one person was arrested because they had thrown a motorized scooter at an officer in front of the McKinley statue on South High Street. Another person was also arrested.

Weir said that mace was used during the skirmish in front of South High Street. He said mace was also used when officers were surrounded by protesters.

Mayor Andrew Ginther issued a directive Tuesday barring police from using tear gas and other chemical agents against peaceful protesters. Ginther also limited the use of pepper spray to instances of clear violence.

Ginther, though, issued a statement Sunday that supported the police action.

from the reddit post "CPD just hit and maced a double amputee. Bravo, you heroes. Unarmed, no legged, they dgaf" pic.twitter.com/knTrJH6coO

1. Columbus Police Mace A Woman Walking Away Who Has Her Back Turned

Not my video, but it shows Columbus police macing a woman as she walks away from them. Absolutely disgusting #columbusprotest #GeorgeFloydProtests #BlackLivesMatter pic.twitter.com/3qCQndM7s6

Last night, I was walking to my car on High Street in Downtown Columbus. A SWAT officer chased me on his bike for about a block while I was sprinting away. I had my hands up and a camera in hand. He told me it was “too fucking late” to leave. He maced me three separate times. pic.twitter.com/NUd7rEk6MK

we were doing nothing wrong. the organizers of this protest put so much fucking effort into keeping it as peaceful as possible and look at what these pos cops CHOSE TO DO TO US#columbusprotest #BlackLivesMatter pic.twitter.com/sY4PQlMQc8

5. Officer Maces From A Distance

Hi. The police officer pepper spraying a man in this picture is Sergeant David Gitlitz.
He attended Bexley High School and graduated in the same class as me.
He has been involved in TWO police killings of citizens. pic.twitter.com/yNwsLvJEk8

6. More Macing From Far Away

7. CPD Rips Gas Mask Off Of Protestor And Peppers Sprays Person With Hands Up

Our reporters were sprayed by police after identifying themselves as "news media" repeatedly. News media are exempt from the curfew. #columbusprotest pic.twitter.com/GOzptPjZD9

Here’s the other angle of this incident. Even more damning. pic.twitter.com/kEcudf7xmj

Video I captured of police dumping protestors water at yesterday’s event. from r/Columbus

05-30-2020 in Columbus,Ohio. Not my video, but of me. Protestors agreeing to peacefully disburse with hands up. I'm purple shirt who falls behind(maced in the face right before this video starts) tackled to the ground with no warning #BlackLivesMatter #columbusprotests #Columbus pic.twitter.com/NFNgGKuiw8

Update: Reports are in that tape coverings may be used as signaling and not body cam/ID concealment. Other info claims body cams aren’t able to be used with issued riot gear in Columbus. We have a request for more info to CPD PR and will update if/when they respond.

Update #2: Police Chief Quinlan admitted to City Council last night that police are unable to use body cams or badges with identification while in riot gear. More here.