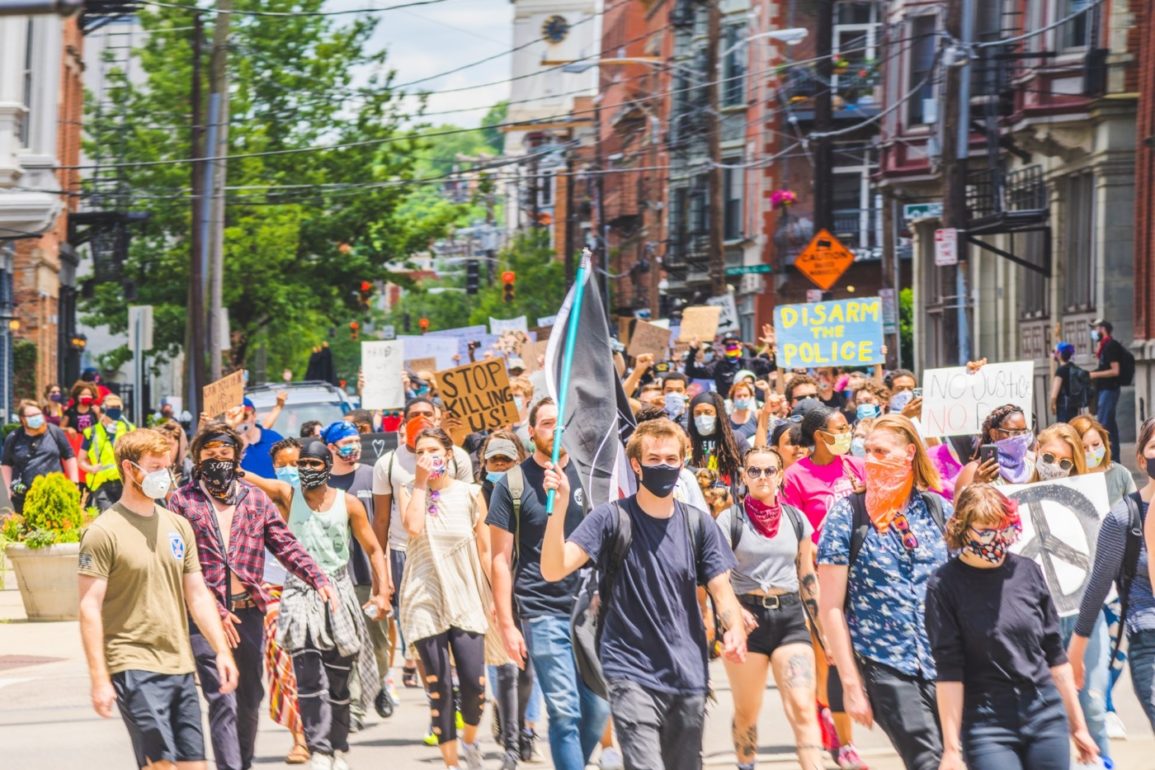 Under The Radar: Smaller Ohio Cities Are Showing Up For Racial Justice

Across the state, communities are gathering together to fight racial inequality. Although the protests have been ongoing for nearly a week, most attention has been paid to demonstrations in Ohio’s three largest cities, Cleveland, Cincinnati, and Columbus.

But the fight against systemic racism doesn’t stop at the edge of our zip codes. People of Ohio are showing up, even in areas that don’t have a history of organized protests, to stand up for what is right. From small, rural towns with mostly white populations to big-city suburbs, Ohioans are showing that we demand change.

“At noon Wednesday, hundreds gathered in the parking lot of the Kingsdale Shopping Center, in front of the blue-tiled building that once held a Lazarus department store. The mostly-white crowd looked on as Sumia Mohamed told the story of how her family came to America from Sudan.

“I came to Upper Arlington purposefully,” Mohamed said, “seeking for peace and justice, and to be a normal human, not Black – American.”

But Mohamed said that didn’t happen, at least not immediately. Mohamed says police followed her husband around the suburb for a month before accepting that he, in fact, lived in the neighborhood. That incident prompted her to get involved in community organizations.

“What I know about you, Upper Arlington people, is you will never be silent for that,” Mohamed said. “You have the power in this country, you are elite people that can make change. You can be a part of the change. Please don’t be silent.”

“Hundreds of people gathered at Alum Creek Park for a Black Lives Matter rally on Wednesday evening. After several speeches, the crowd took their signs and hit the city streets.

Demonstrator Lisa Sawyer said she’s proud of her 21-year-old son who helped organize the event. Sawyer said she was glad to see people turning out to join in as well as the supporters who waved and clapped as they passed the homes with people on porches and front yards.

“Enough is enough,” Sawyer said. “We have to come together and peacefully protest.”

Sometimes the education MUST happen OUTSIDE the school walls.

“Close to 400 people gathered to hold a vigil for George Floyd in downtown Delaware Friday.

It was organized by Lisa Ho, a Delaware resident. During the short vigil, residents lined the sidewalks on Sandusky Street and Central Avenue. A long moment of silence was held in Floyd’s memory.

Ho said she created the event in hopes the community could mourn together.

“It was really the desire to help create space for our community to collectively grieve the loss of George Floyd and events of the past week,” she said.

Ho added she hopes drivers who passed the event saw “(there) are many in our community who believe black lives matter and that black bodies are sacred, and we will not stand by while they continue to be murdered.”

(6-3-20) Later, I attended the protests in Delaware, Ohio. This is a city that is 90% white, and racism still runs throughout. Despite that, a serious amount of people showed up and showed their support for the movement. A great moment to be a part of. #BlackLivesMatter pic.twitter.com/mRKU3FMJn8

“The Perrysburg protesters were led by Aiyana White, a sophomore at Miami University.

During her closing remarks, Ms. White thanked the hundreds of participants for remaining peaceful. She offered a call to action: “What has changed so far is not enough,” she said. She urged the crowd not to let the activism stop. “We want to be equal. We want to share love.”

“Hundreds of people gathered in downtown Youngstown on Sunday to protest police brutality. 18-year-old Sonya Lenoir organized a peace march that was one of multiple gatherings that took place.

Lenoir decided to plan a peaceful rally after seeing the graphic video of George Floyd being killed by a Minneapolis Police Officer.

“I needed to bring something positive in so people can know that we’re sticking together and that we understand what’s going on in the world,” Lenoir said.

“More than 500 protesters marched through downtown on Saturday evening, with chants of a message that could be heard loud and clear throughout the Muskingum Valley.

The event was organized by 19-year-old Kyle Johnson, a recent Zanesville High graduate, and his aunt, Melissa Dickinson, whose goal was to bring racial inequalities to the surface. They began with chants at Zane’s Landing on the Muskingum River and marched through downtown before concluding with speeches from Johnson and Dickinson in front of the Muskingum County Courthouse.”

We had a good turnout in Zanesville, Ohio. Marched through downtown and arrived at the courhouse… pic.twitter.com/NqWVhB2bsw

“An estimated 700 people attended the “Justice for George Floyd” peaceful protest Monday on Public Square, which was announced on Facebook less than 48 hours before it began.

The event included an hour of marching, listening and praying. It was organized by four Mount Vernon residents – Catie Hayes, Clayton Christopher, and Priscilla and Wyatt Mills – who wanted to give their neighbors an opportunity to speak out during a time of national turmoil.

“Standing against injustice isn’t just for those who live in urban centers. Everyone has a voice to use,” Christopher said. “We had noticed from local friends and acquaintances on social media that there is a lot of energy around this issue with a lot of people asking questions about what they could do.”

“About 1,500 people attended a peaceful protest for equality Monday afternoon.

They raised awareness for racial injustice and police brutality, outraged over a repeating pattern of white police officers getting off scot-free when they kill black people while in their custody without ever receiving due process.

“Our voice will no longer fall upon deaf ears,” said Sandusky resident Mary Giles, a black woman. “It will no longer be silenced because silence is consent. We will continue marching and have more protests and rallies, like this, if need be.”

Hundreds of people gathered at Schade-Mylander for the #BlackLivesMatter rally and march in downtown Sandusky. pic.twitter.com/4pMgZXKjDX

“Organizers of the Stark County Peace Rally for Justice, which drew about 300 people on Monday, say they also wanted it to be a teachable exercise in how to demonstrate peacefully.

Tamika Moss, a member of the Lelia Green Alliance of Black Educators, came up with the idea for Monday’s event.

“We wanted to give some direction to our young people,” said fellow member Stephanie Patrick, adding a coalition of activists is planning to meet with Mayor Thomas Bernabei soon.

“We want to do it soon,” she said. “We want to keep the energy going.”

Canton, Ohio! 5 days and nights of peaceful protest. We’re about as structurally simple of a city as you can get but damn if we don’t give a shit. It’s been a beautiful thing like nothin’ else. Also being a bartender through it all so far has been it’s own wild experience. pic.twitter.com/d8rR5s4uNL

“Hundreds of people protested, marched and chanted against police brutality across Athens on Tuesday.

The Athens peaceful rally for POC victims of police brutality officially started at 2 p.m. after a crowd of about 100 people gathered at the Athens County Courthouse at 1:40 p.m.

By 3 p.m., protesters not only filled the steps and outer area of the courthouse, but the opposite side of the street near Chase Bank. All four corners of the Washington Street and Court Street intersection were full of demonstrators.

Jade Kiener, a senior studying psychology and sociology, said the rally took on a special meaning, as June is Pride Month. “I’m thankful for my rights,” Kiener said. “They came from people working for their rights at stuff like this. I’m here to play a part — to show that I care.”

“I come out here and maybe risk getting sick and maybe risking (the protest) getting violent … or I stay home, and I do nothing, and I continue living my life as a black man where violence can happen to me at any time,” Keshawn Mellon saidhttps://t.co/loSxljVkag

From The Newark Advocate:

“It was not in Nicole Rockwell’s plans to come to downtown Newark on Sunday, but the issue was too important to ignore.

Rockwell and two daughters, both Granville High School students, were among the more than 150 people who peacefully gathered early Sunday afternoon for the Together We Rise rally. The event lasted for nearly two hours on the grounds of the Licking County Courthouse.

“We have had a lot of conversations about what’s been going on and what we can do and where we fit in,” Rockwell said. “Literally at the last minute, my oldest asked if it was something we can do. It’s a start.”