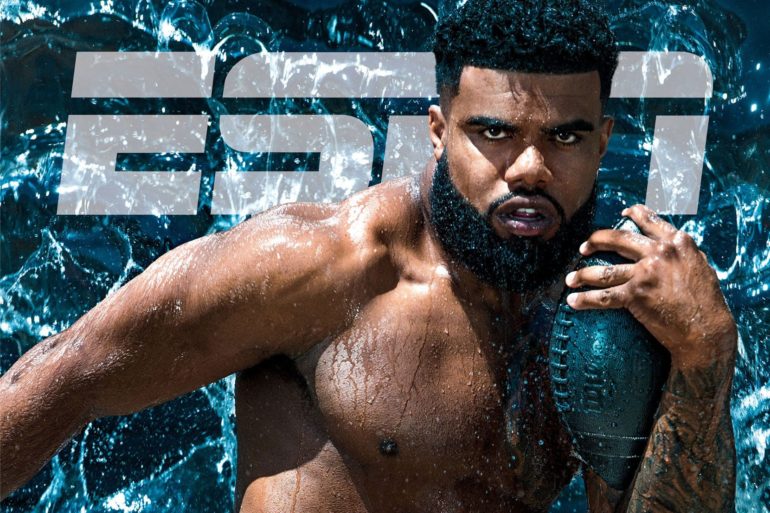 Former Buckeye and current Dallas Cowboys running back Ezekiel Elliott posed nude for the cover of ESPN’s Body Issue. But hold your excitement because some people are outraged.

You can now add "cover boy" to Zeke's resume. pic.twitter.com/DSS8r0Jzef

In the issue, Zeke talks about the physical nature of the sport as well as keeping in shape when all you do is work your body. But people are less concerned with what he’s saying and more concerned with how he appears on the cover.

You can now add "Homosexual" to his resume…

SPORTS. THE S STANDS FOR SPORTS. NOT STRIPPERS

Didn't need to see this first thing this morning. Cool for him, just not my thing.

ESPN has completely forgotten who it's target audience is! No wonder they r losing readers and subscribers!

Some Twitter users were searching for an explanation as to why ESPN would feature a nude male athlete.

Lol wussup why all these male athletes gotta be naked @espn

Of course, this outrage is a double standard. Other ESPN Body Issue covers that show women in the nude aren’t getting the same negative response.

Caroline Wozniacki is ready for Wimbledon … and the cover of ESPN’s ninth annual Body Issue. pic.twitter.com/MjpJFCmESE

Where are the "leakers" when ya need them!?

Ppl have to be crazy to think, she's not sexy. Be you & believe me guys like curves.

why must they cut away before showing the butt? what's wrong with showing her butt? so frustrating.

Personally, I have to agree with Twitter user @yvettewood16.

It's only ok to objectify women. We know. We get it.

I don’t know about you, but if Zeke (or any athlete regardless of gender) wants to show off all of his hard work, that’s A-Ok with me. Haters gonna hate.