The Kahiki Supper Club Was The Most Iconic Restaurant In Columbus

Let’s take a stroll down memory lane and take a closer look at one of Columbus’ most iconic restaurants.

When the Kahiki Supper Club opened in Eastmoor on E. Broad Street in 1961, it was unlike anything Columbus had seen before. The restaurant was opened by restauranteurs Lee Henry and Bill Sapp, who also brought Columbus yet another iconic restaurant, The Top Steakhouse.

Tiki mania was all the rage after World War II when American soldiers were returning from the South Pacific in droves. Having lived in Hawaii, I can tell you that Tiki Bars are entirely a mainland-made fantasy, but that didn’t stop their popularity.

The essence of tiki bars and restaurants like Kahiki was achieved by blending elements of Asian, Polynesian, and Caribbean cultures to create a “faraway” feeling experience for guests. 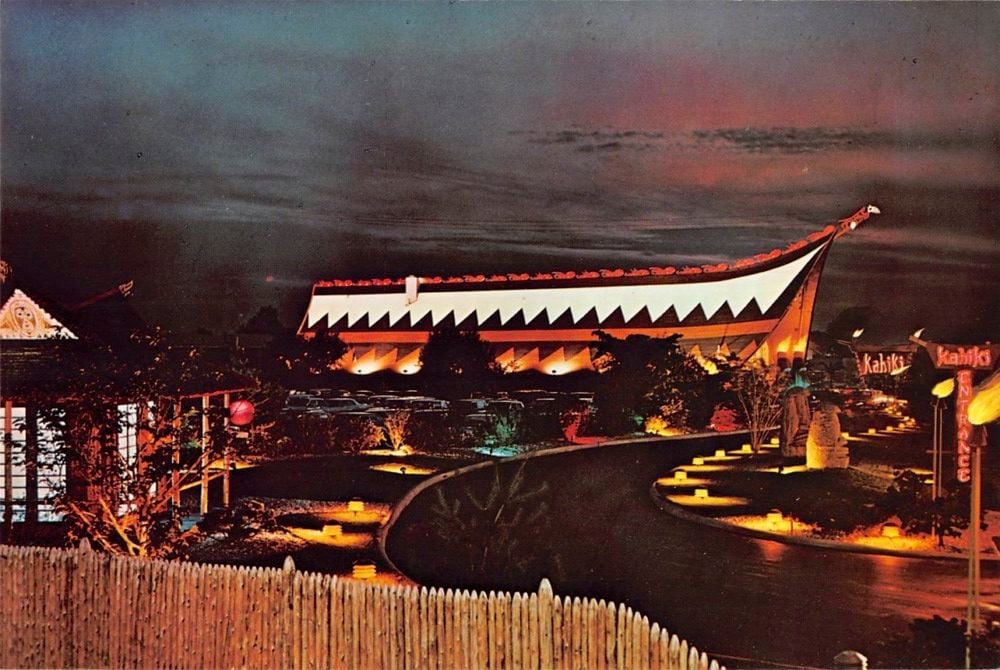 The restaurant was unlike anything else in the city. With its giant Moai statues flanking the main doors, unique architecture, and tropical vibes, the restaurant left visitors feeling completely transported.

Once inside, there were all of the typical tiki accouterments, including fish tanks, faux rain forests, and kitschy, tropical decor. Hundreds of guests could be seated at once inside the dining room of the Kahiki. The restaurant even had its own gift shop and faux lagoon.

For years, Kahiki was the place to be in the city. Celebrities frequently visited the restaurant and it was a popular destination for drinks, dinner, and fun.

Some of the restaurant’s most famous guests include Bob Hope, Gypsy Rose Lee, Van Johnson, and even Zsa Zsa Gabor, who reportedly ordered milk. To be honest, I don’t really know why I found her ordering milk so interesting, but I did, and I wanted you all to know. It’s such a Zsa Zsa Gabor thing to do.

The drink menu at Kahiki had all sorts of incredible tiki cocktails. Sure, they had classic options like a Mai Tai and even creative options like the Suffering Bastard, but their most revered cocktail was The Mystery Drink.

The Mystery Drink was all about the drama. The cocktail served four and would be brought out by a Mystery Girl, whose arrival to the table was signaled by a giant gong. When I say we never had anything like this in Columbus before or since I truly mean it.

The Kahiki was about more than just food and drinks. It was an experience, and it was one that visitors came back and back again for through the years. In the book Kahiki Supper Club: Polynesian Paradise in Columbus, authors David Meyers, Elise Meyers Walker, Jeff Chenault, and Doug Motz tracked down former employees, former owners, and old stories about the incomparable restaurant.

The writers share the story of Philip E. Kientz, a German Village resident, and artist, who carved the famous moai statue that stood outside the restaurant. Kientz served in the U.S. Coast Guard during World War II and after being discharged in 1945, he returned to Columbus and enrolled at Columbus College of Art & Design.

Kientz’s work went on to be iconic around the city, where you could see it in the Nativity scene at the State Auto Insurance building, Street of Yesteryear at the old COSI, and even the famous Lazarus Christmas displays.

Recent efforts have been made to restore some of Kientz’s work from the Kahiki. Affectionately called George, this is one of the last remaining statues from Kahiki and it stood outside of the Grass Skirt for years until the tiki bar closed in 2019.

George is being lovingly restored by Tork Collaborative Arts, which is pretty exciting for Kahiki fans.

Over the years, ownership of the restaurant changed hands, ending up with Micahel Tsao in 1988. Tsao decided to expand the Kahiki brand into the frozen food market, starting by selling egg rolls in grocery stores in 1995.

Just five years later, the Kahiki Supper Club would close its doors forever, on August 25, 2000. The building was old and in need of expensive repairs, so Tsao made the decision to sell. The Kahiki was subsequently dismantled and torn down, replaced unceremoniously by a Walgreens.

Mike Monello stopped by to photograph the demolition for himself, sharing his experience with fellow Kahiki enthusiasts on Flickr.

“The Kahiki Supper Club was one of the greatest Polynesian Restaurants in the world. Located in Columbus, OH, the Kahiki opened in 1961 and remained in business until August of 2000, when it was demolished to become a Walgreens. Because what the world really needs is another Walgreens,” Monello writes.

“I shot the salvage operation, including this footage of the Moai fireplace, the centerpiece of the Kahiki, being yanked from its home through a hole in the roof.”

Kahiki Supper Club is honestly one of the most highly-revered and talked about restaurants in Columbus history, even decades after the doors were closed for good. You can see the admiration for the restaurant, and the nostalgia it inspires, all around the city.

We’ve still got some fantastic old restaurants in this city, but there’s something about Kahiki that will continue to spark interest.