The 11 Most Bizarre Mythical Creatures From Ohio

Ohio can get creepy. Nearly everyone has a story, something they saw in the woods or the side of the road. Something they can’t explain.

But what you may not know is that according to cryptozoologists, Ohio is a hotbed for creature activity. From Bigfoot-esque monsters to massive, kidnapping reptiles to all other mythological things that go bump in the night, the stories that come out of Ohio are some of the most unique in the country.

If you’re anything like myself, you have to admit a bit of skepticism about some of these creatures, but maybe that’s only how you feel until you see one for yourself.

This means it may just be time to break out our headlamps and try to catch one of them in the act!

In 1955, a man was traveling through Loveland, Ohio, when he saw three mysterious creatures. Of course, the story has many versions, so he either saw them near Branch Hill OR over/under a bridge on the Little Miami River.

The unnamed man claims that he saw the figures, which were about 3-4 feet tall, conversing with one another. The creatures had leathery skin and the faces of frogs.

In addition to their amphibian attributes, they also had a wand that they waved over their heads, which naturally scared the passerby.

The stories of the Loveland Frogmen have been repeated throughout the decades, with the most recent sighting taking place in 2016.

A young couple was out playing Pokemon GO when they claimed to see a giant frog-like creature that “stood on two legs and walked towards them“.

Have you ever seen three-toed footprints in Cuyahoga Valley National Park?

You may have been hot on the trail of one of Ohio’s most legendary cryptids, the Grassman. Often referred to as the Eastern Bigfoot, the Grassman is reportedly a 7-foot tall, 300-pound hominid.

According to famed cryptozoologist Loren Coleman, the Ohio Grassmen have a more human-like appearance and are more human-looking and are shorter than the classic “Bigfoot”. 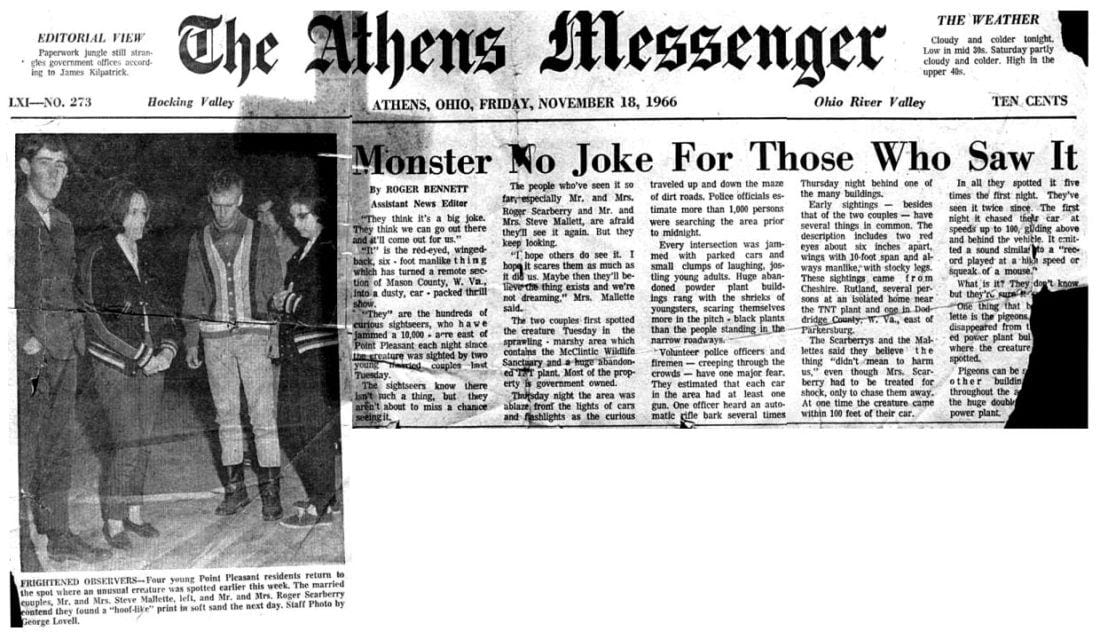 After the first sighting of a winged creature in 1966, an Ohio copy editor dubbed the mystery creature the “Mothman”. Although typically associated with Point Pleasant, West Virginia, the Mothman was also active across the Ohio River in Gallipolis.

Hundreds of Mothman sightings were reported in Ohio in the 1960s, but the mystery actually goes back centuries to the native Wyandot people who inhabited the Ohio River Valley. According to author Mark A. Hall, the Wyandots were plagued by giant, flying, bird-like creatures who would blend into the clouds and fog, destroying crops and plucking children from villages.

Yet another Bigfoot-type creature lurks in Ohio, this time near Minerva. The Minerva Monster was first spotted by the Cayton family in the late 1970s when they followed the sound of their barking dogs to a pit on their property where they disposed of trash.

Inside the pit, they found a massive, 7-foot tall, 300-pound creature, covered in fur, staring at them as they approached.

The creature returned to the family’s property so often that it was witnessed by several other friends and family members and even investigated by the sheriff.

During the creature’s final appearance at the property, two creatures were spotted after the home was pelted with rocks while the family was inside.

Although sightings continued in nearby counties, none were as detailed as the Cayton families, whose stories remained unchanged for decades.

The Cedar Bog Monster is yet another example of Ohio’s Bigfoot activity.

When the Cedar Bog was first opened as a nature preserve in 1942, Ohioans reported seeing a large ape-like creature in the area. After some teenagers went missing at the Bog, the existence of the monster was solidified in the minds of the people.

Shortly after, the bog was fenced in, reportedly to keep people from wandering into it and to keep deer and other wildlife from straying onto the road.

But hardcore fans of cryptozoology think it was actually designed to keep the creature inside. 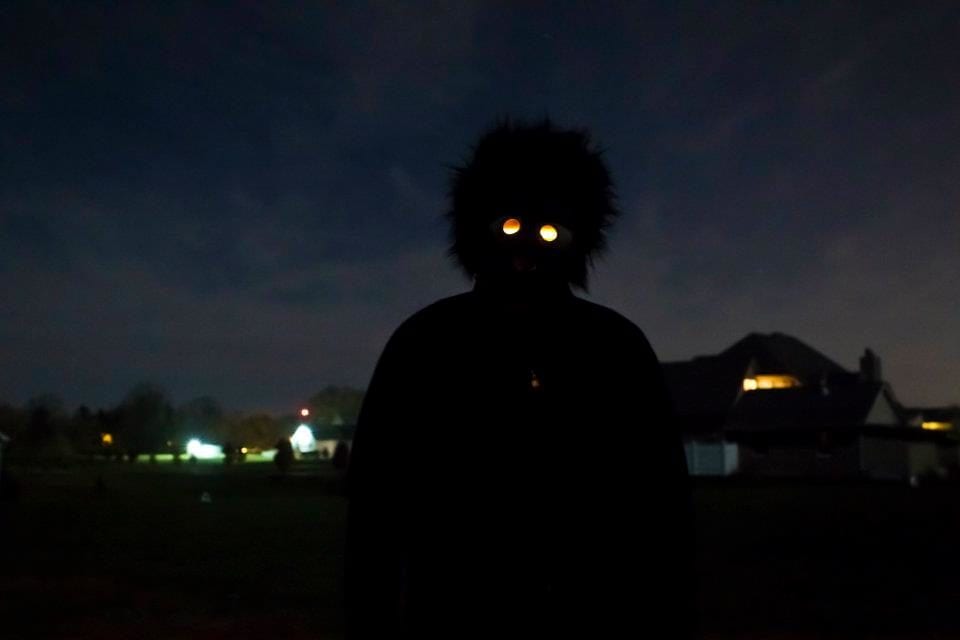 Not to be confused with another monster in the area at Charles Mills Lake, Orange Eyes is one of the more terror-inducing cryptids you can find in Ohio.

Reported to be more than 11 feet tall, Orange Eyes lurks near Mansfield, Ohio, though he is said to have originated in Cleveland.

The 1000-pound hominid was spotted last in 1991, when it appeared to two fishermen in Mill Creek, before retreating into the nearby woods.

Some locals believe that Orange Eyes was actually an alien being, due to the fact that a green beam and UFO were spotted in the area in the 1970s.

Whatever Orange Eyes was, it hasn’t been seen in over 20 years.

More well-known in the area is the Charles Mills Lake Monster.

This mysterious cryptid has only been documented once.

In March of 1959, teenagers Denny Patterson, Wayne Armstrong, and Michael Lane were running amok near the shores of Charles Mills Lake when they saw something that terrified them.

Out of the water came a 7-foot tall, armless, humanoid. The boys noted that the creature had glowing green eyes and massive webbed feet.

After the boys reported what they had seen, authorities searched the area, finding footprints that they thought resembled tracks that scuba and snorkel diving fins would leave behind.

Around 20 miles north of the Loveland Frogman’s territory lies Crosswick, home to the Crosswick Monster.

Although the monster hasn’t been spotted in nearly 200 years, the legend of the Crosswick Monster is still told in the area.

According to reports, two young boys were playing on the banks of a small creek when they were startled by a massive, snake-like creature. The monster sprouted arms and snatched one of the boys, dragging him nearly 100 yards to a massive sycamore tree that was assumed to be its den.

The Crosswick monster dropped the child just outside a hole in the tree’s bank.

The 26-foot diameter tree was eventually chopped through by dozens of men from the town and when the serpent creature reappeared, the men noted that it was between 12-14 feet tall.

The monster escaped the men, crashing through a fence before darting into a cavern.

The full description from the men read:

“It is described as being 30 to 40 feet long, 12 to 14 feet tall when erect, 16 inches in diameter, and legs 4 feet long. It is covered with scales like a lizard’s, of black and white color with large yellow spots. It is head about 16 inches wide, with a long forked tongue, and the mouth inside deep red.”

Although the Crosswick Monster was never seen again, it is remembered as one of the most believable cryptid experiences in Ohio, as more than 60 men claimed to have witnessed it. 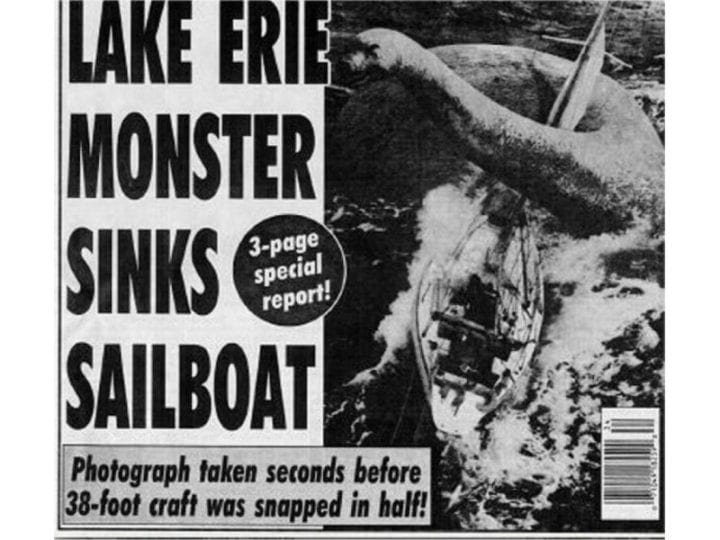 What would be the point of having a massive lake without a mysterious lake monster?

Bessie, Lake Erie’s very own monster, was first spotted in 1793. Initially, she was said to be between 30-40 feet in length, but as time has gone on Bessie’s length has grown.

Some theorize that Bessie sightings could be attributed to the massive sturgeon that were once prevalent in Lake Erie, but locals insist that Bessie is real, and most definitely not a sturgeon.

In the 1990s, a reward was offered to anyone who could catch Bessie, but alas, the reward wasn’t claimed.

The Peninsula Python may not be a true cryptid, but it deserved an honorable mention on this list nonetheless.

The story goes that in 1944, a circus train car tipped, spilling exotic snakes into the countryside of Peninsula, Ohio. Though most were recaptured, one terrorized the town: a 20-foot python.

Sightings of the massive snake were reported for weeks after its headline-grabbing escape, swimming through creeks and stalking livestock.

Women and children were even advised to stay indoors to avoid the creature!

As the months passed by, the snake evaded the people of Peninsula, and when August approached, they assumed that the upcoming winter would cause the snake to die.

Described as a werewolf-like creature, the Dogman has reportedly been seen all throughout Ohio, including our very own Franklin County.

Eyewitnesses describe the Dogman creatures as between 4-6 feet tall, often very muscular, and with pink or gray skin. It is sometimes seen on all fours or walking bipedally.

One of the most recent accounts was in 2016 in Allen County. The Dogman is typically associated with Michigan, but in the past decade, several sightings have taken place throughout Ohio, an understandable migration.