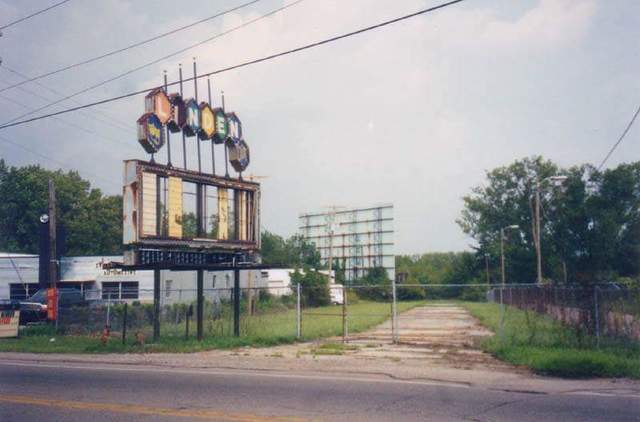 There’s something so quintessentially American about drive-in movie theaters.

When you think of a drive-in theater, you immediately picture a lot full of colorful ’50s muscle cars. The guys are in leather jackets and the gals are in poodle skirts. Folks are sitting with the tops down on their convertibles and watching the movie. A guy stretches his arm over a girl’s shoulders and makes “the move.” Okay, yes. I just described that scene in Grease. But you know that’s what you were thinking, too.

Central Ohio was once home to over a dozen different drive-in theaters. Most of them have been closed, demolished, and forgotten. While few pictures of the theaters remain, some of these ads found in old editions of the Columbus Dispatch give us a glimpse into just what the theaters were playing in their hay-day.

Address: 645 North James Road
This was the first “in-and-outdoor” theater in Franklin County, though in its later years it became an outdoor only theater. People that wished to sit indoors would watch the same movie screen as the people out in their cars. How you ask? The indoor theaters had large glass walls so views could see out to the 116-foot screen. The drive-in could fit roughly 1,000 cars, and now that land is used for industrial and commercial purposes.
Opened: 1957
Closed: 1983

Address: 1395 Harrisburg Pike
Part of a chain of theaters named for the Cincinnati, Columbus, Cleveland, “3-C Highway,” the CCC Auto Drive-In had two screens and could fit 500 cars when it closed in 1986. Southwest Square Shopping Center now calls the spot home.
Opened: 1948
Closed: 1986

Address: 3811 East Main Street
The Eastside Drive-In was one of three drive-in theaters that could be found in Whitehall. Today, you can find an ALDI in its spot.
Opened: 1946
Closed: 1980

Address: 3651 E. Main Street
Also found in Whitehall, the In-Town Auto Theatre opened on May 18, 1955. It was 14 acres and had electric heaters so movies could be enjoyed year-round. If you go driving down this part of E. Main Street in search of the theater, you’ll find a Walmart.
Opened: 1955
Closed: 1965

Address: 229 Cheshire Road
Up in Delaware, the Kingman Drive-In was open for just over half of a century. The land was sold and housing development sprung up in no time at all.
Opened: 1948
Closed: 2001

Linden Air Drive-In
Address: 3168 Westerville Road
This drive in opened on Friday, July 14, 1950 and it showed Red River (1948). The crumbling remains of the driveway to the Linden Air Drive-In are found next to Habitat for Humanity.
Opened: 1950
Closed: 1984

Miles East Main Drive-In
Address: 4750 East Main Street
The third of the drive-ins in Whitehall, this theater was later called Chakeres East Main Drive-In. A root beer shop called Dog ‘N Suds was within walking distance, and movie goers would often treat themselves to it. The drive-in stood right around the area where Golden Corral is in today’s day and age.
Opened: 1948
Closed: 1995

Address: 3050 Riverside Drive
This drive-in was across from Griggs Damn in Upper Arlington. There is now a building with office spaces located there. The opening features were Stallion Road (1947) and Frontier Days (1934).
Opened: 1948
Closed: 1965

Address: 4050 West Broad Street
This theater opened on September 18, 1947 and Silver River (1948) and Here Comes Trouble (1948) were the movies to appear on the silver screen. Buckeye Raceway Electric Indoor Karting now stands in the general area of where the theater sat.
Opened: 1948
Closed: 1970

Address: 5800 Riverside Drive
Riverside Auto Drive-In was the first drive-in theater in Columbus. It opened in June of 1940. After the end of World War II in 1945, drive-ins started sprouting up all over Central Ohio. The residential area around Cranston Drive was where this theater was located.
Opened: 1940
Closed: 1976

Address: 8659 E. Main Street
June 8, 1961, this theater thrilled audiences for the first time with The Lost World (1960) and Ester and the King (1960). The State Fire Marshal’s Office sits right by where the drive-in was located. While the screen and sign are long gone, the concession stand building still stands.
Opened: 1961
Closed: 2003

Address: 3050 S High Street
The memory of the automotive movie theaters of Columbus lives on at the South Drive-In. It’s the only drive-in theater that’s a part of both Columbus’ past and present because it’s still open! Click here to view movie times.
Opened: 1950

Address:900 W. Fifth Avenue
The grand opening was on July 1, 1953 and the West Fifth Avenue Drive-In premiered with Titanic (1943). This drive-in was smaller than other drive-ins in the area and was build with the plan to operate it year-round. A Jiffy Lube now sits at the 900 W. Fifth Ave address.
Opened: 1953
Closed: 1978