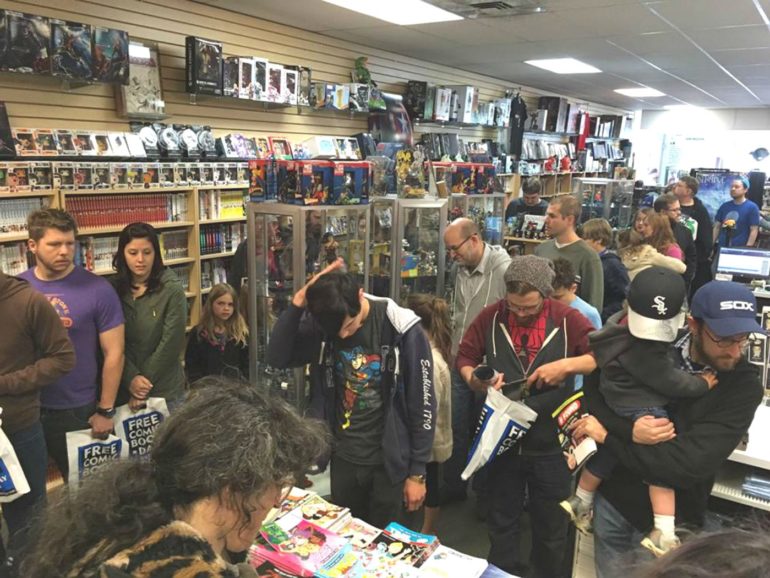 There are certain landmarks and staples that define Columbus. Some of those are largely understood: Our North Market has a killer food scene, COSI stands out in nearly everyone’s childhoods as an institution that nurtures all things science and STEM related. But if you’ve ever held any interest in comics and nerdery in the capital city, you know that Laughing Ogre on North High Street is just as much a landmark as any of these.

Their layout and welcoming staff makes it easy for anyone, from the most devout to the occasional reader, to dive in and immerse themselves in the fantastical and the charming lore that can be the comic medium. They were even mentioned in a recently published book, Comic Shop: The Retail Mavericks Who Gave Us a New Geek Culture by Dan Gearino, detailing the business and culture of comic shops in America. I got to pick the brain of Gib Bickel, the store’s manager, about the shop and the business of comics as it exists now in our culture.

Your store seems largely different from other shops in the city (or anywhere else for that matter), what do you think makes you stand out among other comic stores?

Every comic store is different, because every store loves different stuff.  At The Ogre we love stories, and so that is our emphasis. Some stores love toys, or shirts or even superheroes.  We enjoy all those things, but the thing we love most is stories. Regardless of genre, company or country of origin.

Have you noticed a more diverse group of customers in your store (race, sex, etc) as opposed to maybe 15 years ago and why do you think that may or may not be?

We’ve seen a lot more diverse audience in the last few years. I think the comic book movies, and not just super hero movies, have lead to a wider audience.  I also think the availability of great all ages books in schools have broadened our customer base.  The Bone series alone has converted tens of thousands of people into comic book fans. The industry has Columbus’ own Jeff Smith to thank for that

Why do you think there’s such a wide difference in comic movie sales as opposed to the original source material?

I think the biggest difference is that Americans don’t like to read as much as they like watching TV or movies. Print in so many ways is having a hard time prospering.

There’s an opposing view that there will, at some point, be a bursting point for comic book movies. Do you think that idea is valid or do you think the hero genre in movies is impervious to the growth and burst cycles that are apparent in the actual comic industry?

Super Hero movies will eventually become less of a force.  It’s just the way our culture consumes things. Westerns used to be very numerous, and no longer are. But, since comic book movies cover so many genres, I doubt they will ever go away.  Remember Road to Perdition, Ghost World, A History of Violence and Men in Black are comic book movies too.

Are there any particular titles you’re excited about and that you think comic fans should look forward to reading?

Three of my favorite new books are Heathen, a comic set in Norse mythology, Long Lost, a creepy horror story by a local creative team and Port of Earth, a science fiction series about negotiations between Earth and aliens over establishing a port on our planet. All very different and all very compelling.

What are some particularly great titles for people who may feel intimidated to just jump into comic collecting and reading?

Those last three titles are perfect for that.  We also have a shelf that runs the entire length of the store with great books to start reading.

They’ve created some really new diverse and beloved characters, but alienated a lot of older fans by replacing the traditional heroes.  I believe they will eventually find the perfect mix of new and old characters.

There seems to be a bigger rise in sales from third party publishers, what do you think contributes to this?

I’m digging the Arrowverse and all, but with the launch of the DC streaming service including new titles like Harley Quinn and Swamp thing, it’s looking like the DC televised/cinematic universe is looking to have three to four separate continuities. Why can’t it follow suit with Marvel’s singular model and does it even want to?

I watch so little TV, I have no idea. They may fear that a huge universe will scare off new viewers.

My friends make fun of me for collecting the trade covers instead of the individual comics. They suck because obviously trades are convenient and they look super dope on my bookshelf. This isn’t really a question, I’m just complaining about how awful and dumb my friends are. Thoughts?

I love floppies, that traditional comic book format.  But I love pulling a trade off a shelf to reread a favorite story just as much.  No looking for all the issues, taking them out of their protective sleeves and such.  And a book shelf of trade paperbacks does look “super dope”.

Check out their website here, and be sure to set up a pull list and hit them up soon!