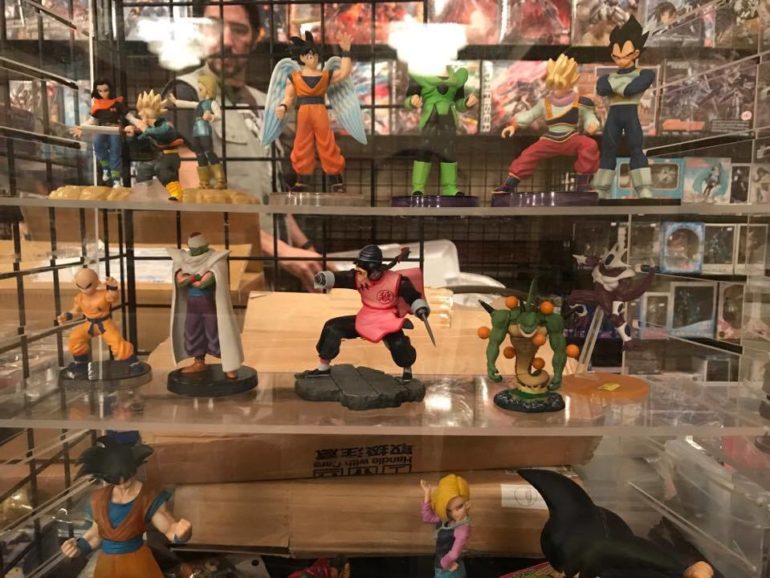 The Last Shumatsucon: What An Anime Convention Taught Me About Myself And Society 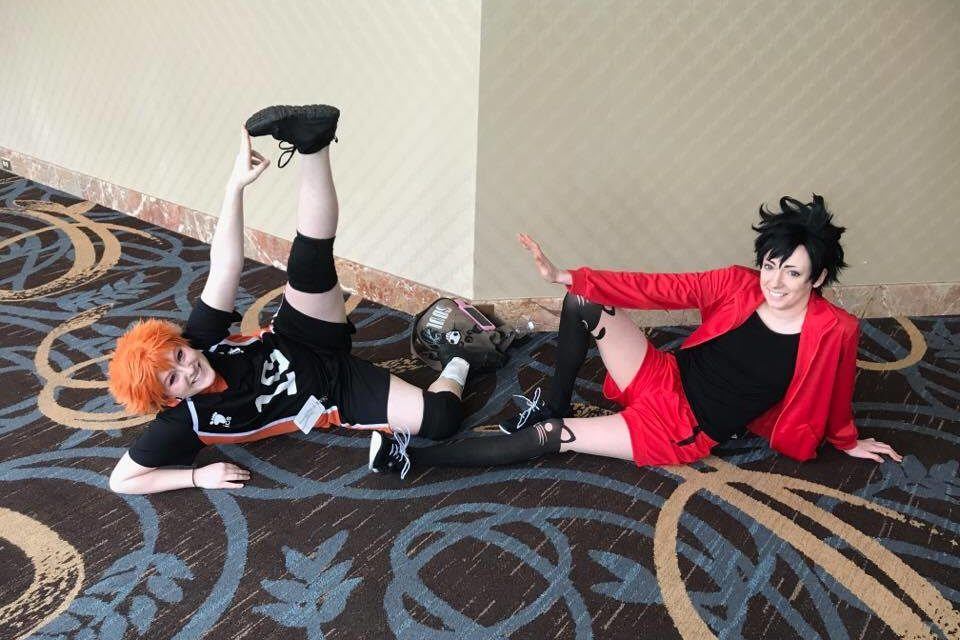 Anime conventions have a distinct sound, I realized. An electronic bass thudded off in the background, buried beneath a boppy little synth tune as it cut into an overly dramatic refrain. The high pitched staticky consonants of Japanese spoken from video games and animated shows echoed off the walls on both sides of me. Then there are the sights. Bright pink wigs, the flickering neon lights of television sets, extravagant and colorful costumes of Japanese high school students and oddly dressed ninjas (and sometimes oddly dressed Japanese-high-school-ninjas). All of it bombards you, rocking you back on your heels. You have to prepare yourself for these types of things, I thought to myself.

I approached Shumatsucon cautiously. It was my first time covering an event like this so I expected just about anything to happen. Creeping through the crowd warily I felt like some modern day explorer on safari, blunderbuss camera in hand, on the lookout for big game. Full-on Sailor Moon Costume. Snap. An entire room of people fighting with foam weapons. Snap. Pokemon Snap photo-booth game that prints off pictures of the Pokemon you photograph (the irony of taking a photo of the machine was not lost on me). Snap. Every corner I turned brought a new oddity and I was giddy from it. I was having a blast meandering through crowds of bizarre fans, scoffing at their absurdity. 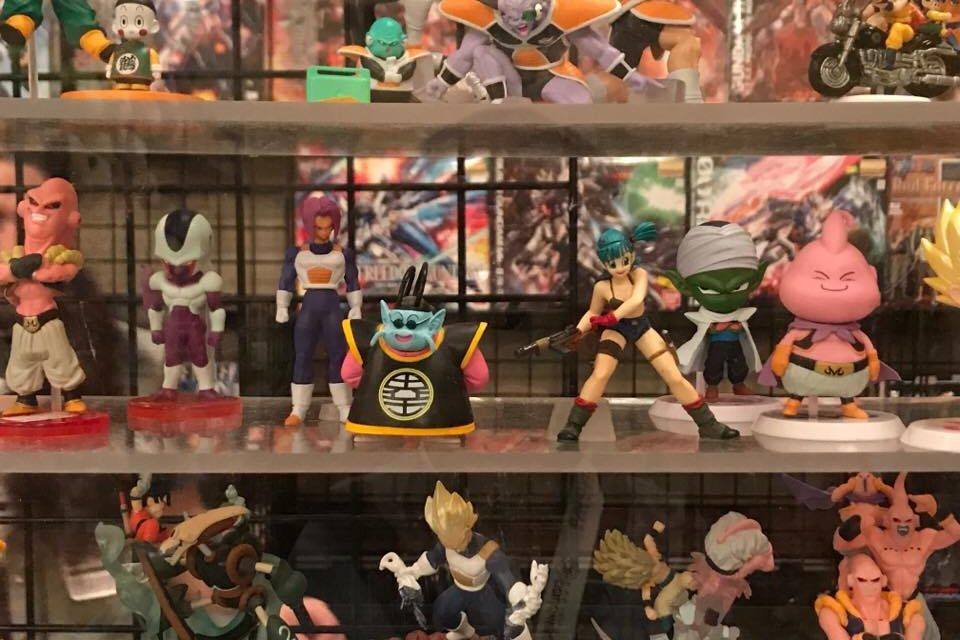 After a while I began to feel desensitized to the original shock of its weird charm, less judgemental. I was beginning to sense something beneath the veneer of kawaii catgirls and Dragon Ball Z costumes. Even though this was my first foray into the world of anime conventions, I could tell that there was something different about Shumatsucon. “Shumatsucon was really a manifestation of everyone’s desire to better the Columbus convention community.” Said Jen Skaggs. She was one of the founders and promotional artists of the event. “All of our staff is comprised of people that [Matt Geisen] and I have known for a long time and whom we trusted to create an amazing environment for our attendees.”

I could see a familiarity between the convention staff, that much could be expected, but what surprised me was how acquainted the attendees were with the personnel. Everyone seemed to recognize each other, it made me wonder just how small the convention circuit was. Jen assured me that it wasn’t quite that common of a thing.

“We have an atmosphere of family. Not a lot of conventions, big or small, can boast the kind of closeness that we, as an event, made sure that everyone felt.”

That sort of intimacy couldn’t have been an easy thing to foster. The attendees varied wildly by demographic and walks of life. They were different ages, races, and gender identities, but they all seemed genuinely amiable and considerate of each other. Jen explained how important this was to the core of Shumatsucon’s conceptualization. “As people who were bullied, outcast, and mistreated for expressing ourselves as kids, we absolutely wanted to make this a safe space for people to be unabashedly themselves.”

They certainly put in a lot of effort. On each of the doors to the bathroom were signs making clear that each was gender neutral. People were free to use whichever made them feel more comfortable. I thought back to the opening ceremony, with Matt Geisen, the founder and event coordinator, making clear that if anyone was made to feel uncomfortable in any way that they were encouraged to reach out to the staff. There was even the addition of a “Chill Room”. A softly lit room with bean bags strewn on the floor for anyone needing to decompress. Anyone suffering from a fit of anxiety or anyone who simply needed to charge a phone could breathe, relax, and color in the adult coloring books that the staff provided. 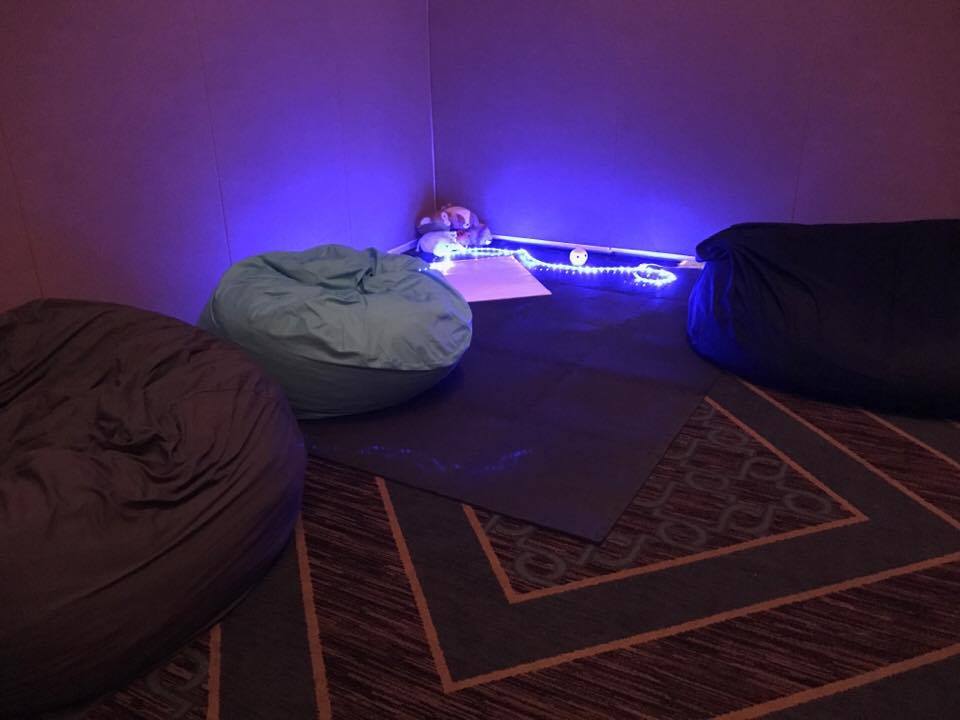 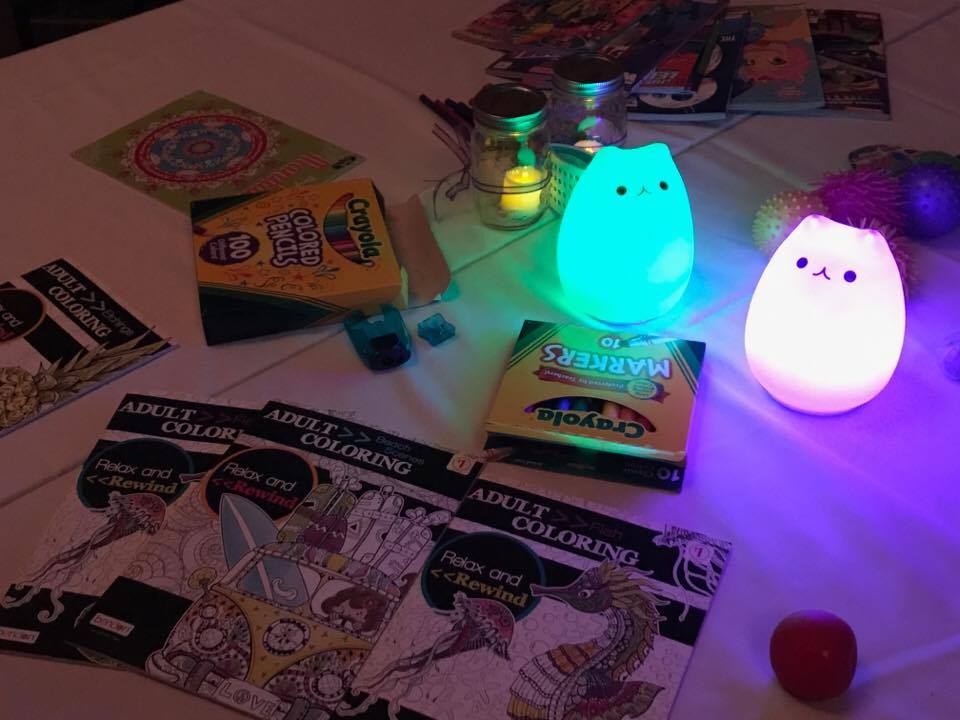 Besides the Chill Room they also had an Artist’s Alley, with artists displaying their various works and crafts for sell. Seated behind their wares, they smiled shyly at the crowds as they perused their work. The Merchant room next door was loaded with tons of figurines, tee shirts, and other convention swag. There were also several rooms of panel discussions from voice actors and YouTube stars, addressing attentive audiences, their eyes full of fanboy admiration. 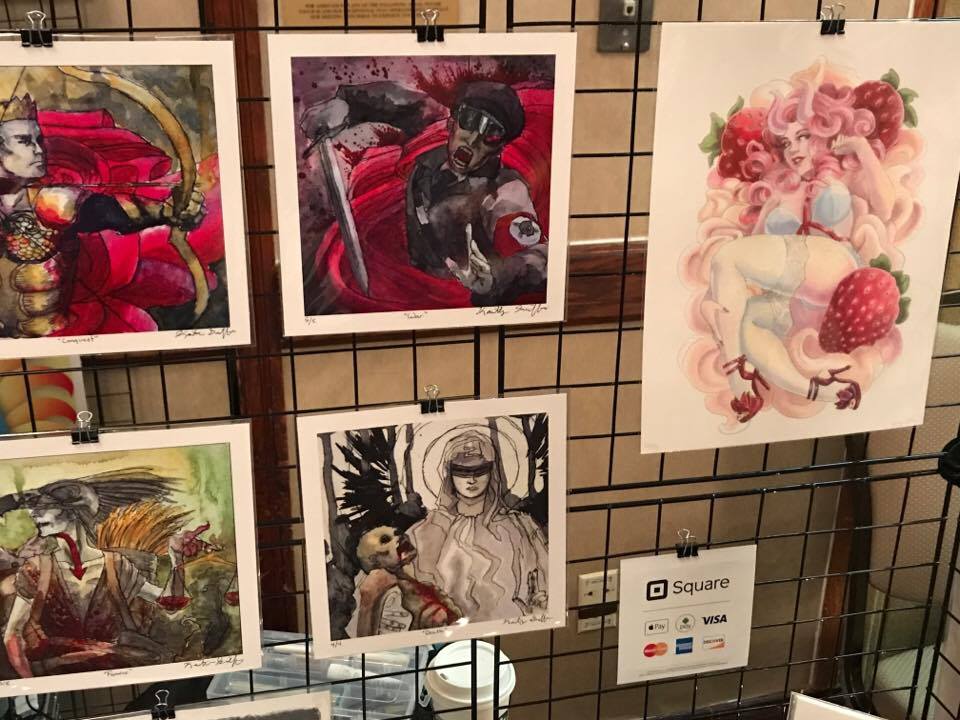 I floated from room to room, studying faces that were as enraptured by the sights and sounds as I was in their own character and appearance. I was in a carnival of human nature, privy to the inner workings of an entire subculture with their own customs and jargon. Eventually taking it all in exhausted me, I needed to sit and collect myself. I wandered into an arcade room full of gaming consoles and television sets. More synthy Japanese pop music blared away on a DDR machine. I plopped down in front of one of the games and grabbed a controller, no reason I couldn’t get some quick fun in while I caught my breath. Slouched in a folding chair, fingers clacking away at buttons and joypads, it wasn’t long until I noticed a tiny and timid frame approaching from the corner of my vision.

It was a kid, no older than 13 years of age. He looked nervously from the game I was playing to me and back again. He was clearly nervous, slinking closer into my line of sight before retreating again. Finally he worked up enough nerve to say something.

“What are you playing?” He asked. I shrugged, a bit irritated, trying to concentrate on the game. “I dunno. Street Fighter.”

“Oh.” He replied. He lingered a bit longer behind me. Obviously he wanted to start some sort of conversation but was unsure how. He shifted anxiously from foot to foot and I watched him warily from the corner of my eye. “Is it any good?” He asked. “I’ve been thinking about trying it. Who do you like to play with?” He seemed to be satisfied that he had gotten the words out, proud of himself even. “I don’t know. Ryu I guess.” I was being short and I knew that, my answers were carefully crafted for brevity. “Oh…” He answered, a bit dejected. He hovered around a moment longer before taking his leave, he didn’t give any farewell, he just sort of wandered away.

For a while I felt content and went back to my game, but eventually something started to bother me, it itched at the far corners of my thoughts. I started to think about how many strides the convention had taken to feel so inclusive. I thought about what Jen Skaggs had said about how these kids had been made to feel isolated and outcast. How they’d been labeled as weirdos their whole life and how this place was meant as a haven for the dejected. “Shumatsu was born after a not-so-savory con experience,” She said, “Matt, myself, and our former convention co-chair were all talking about how we wished we could just start a convention to combat the negativity rising up in the convention scene. After awhile, we realized this was something that we actually wanted to do, and Matt pulled it all together wonderfully.”

I know I hadn’t done anything to create “an unsavory experience” for the kid. I wasn’t nearly as rude as all that, but still, the guilt began to tie a knot in the pit of my gut. Something had been bothering me since the moment I stepped foot in the convention, caught and clinging to the corners of my mind. But now it had been jarred loose and I understood it.

I thought that I was different from these people, but I wasn’t, and something in me had already known that.

Thinking back on that kid I realized that I was once him, a small framed, nerdy, anxiety riddled mess that one day had happened to have crossed the Rubicon into some awful facsimile of what society approved of. I had come to the convention as a separate entity. A voyeur watching from outside and afar. I had to accept exactly what I had become now- a sellout.

I looked around for the kid, hoping I could find him, maybe get him to join me for a game or two and make up for being such a jerk. But he was gone. Lost in a wave of color and cosplay, off to find more amiable company, a more welcoming sparring partner to practice his hand at conversation. I was left alone to stare at a pause screen, feeling like every bit of the jerkface schmuck that I was.

Walking through the convention now I could see how at ease people were. Smiles of genuine happiness lit up everyone’s face. Here they didn’t have to hide anymore, they could be as weird as they wanted. They could talk freely about their interests and obsessions without apologizing or getting judging looks or being openly ridiculed. Everyone’s freak flag was raised proudly, cat ears and unironic anime shirts on full display. I had completely forgotten that I was one of them. Of course I mean that we’re all one them. We all have some secret nerdery or a guilty pleasure squirreled away deep in us, but also too, I mean that I am literally one of them. I love anime and video games and all the weird Japanophilia in between. I have the Crunchyroll app on my Playstation, I took three courses of Japanese in college, I’ve seen every episode of both seasons of Clannad and nearly cried.

This past Shumatsu will have marked its last and final convention, with the founders and staff calling it quits for reasons undisclosed. Jen Skaggs seemed genuinely mournful. “I will miss it a lot. I made so many memorable personal connections through running the Artists’ Alley for the last three years that I will carry with me forever. I will truly miss all of it.”

I personally feel a sort of loss for the event and I’m not exactly certain why. Maybe it reminds me to grieve for my own shameless youth, of times when I was more accepting of my own eccentricities. Maybe it’s because I feel like I didn’t take advantage of the event’s welcoming hospitality while I could and just let out all the weirdness society tells us we need to suppress. Or maybe, just maybe, it’s because I know it’s kindness and inclusivity is something that the world could desperately use now. Especially in the unempathetic, Ayn-Randian, nightmare timeline we occupy now.