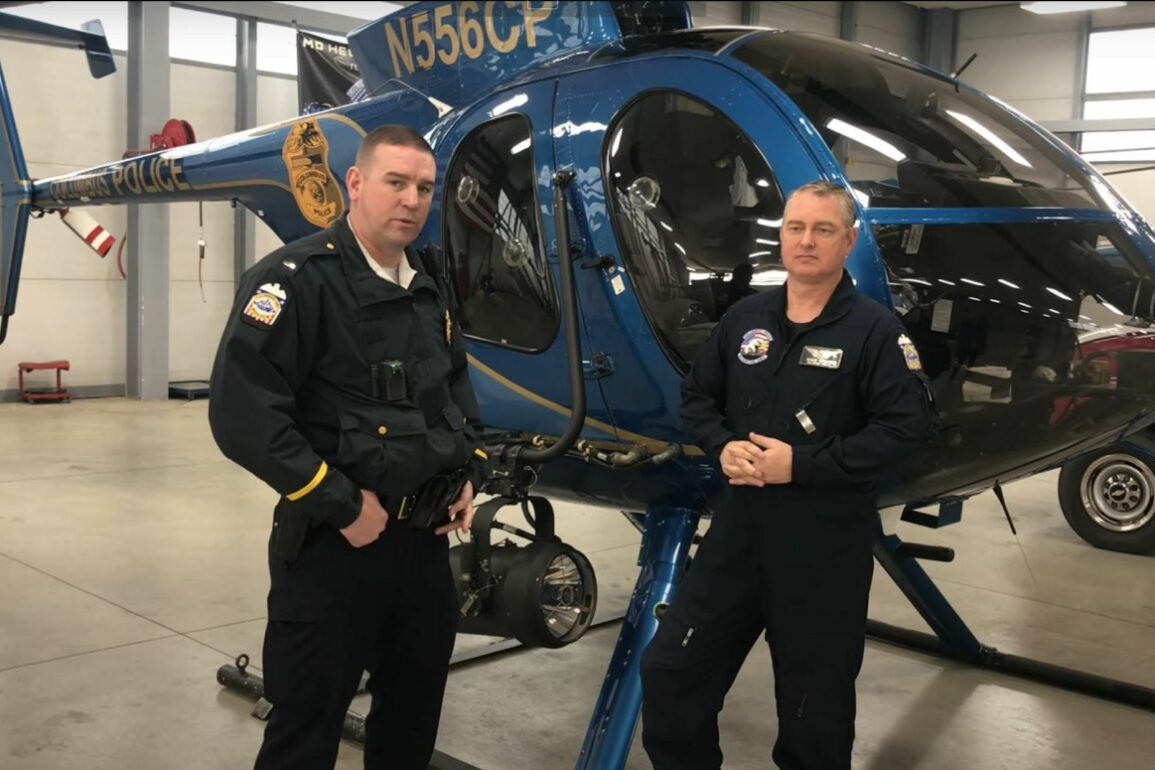 “Like Psychological Warfare”: The Mental Toll Of CPD Helicopters

“Like Psychological Warfare”: The Mental Toll Of CPD Helicopters” was originally published by Matter News, a local news nonprofit in Columbus, Ohio, on August 27, 2021. Sign up for their newsletter here.

But for Villavicencio and their partner, who lived in the North Linden area up until this January, it wasn’t the community that made them worry for their safety. Instead, it was the constant police presence.

Villavicencio said they first started noticing an increased police presence in their area in 2019, and it only got worse from there. By the time people across the nation began to implement social distancing measures to avoid the spread of COVID-19, it had become difficult for Villavicencio to deal with.

And one of the worst offenders was the Columbus police department’s helicopter fleet, whose presence, Villavicencio said, was relentless.

“To me, it felt kind of like they were trying to flex on the community and intimidate us, because it just was constant. Lights would come in our windows at all hours of the night. It felt like psychological warfare.”
Sid Villavicencio, former Columbus resident

Villavicencio’s experiences with CPD in their primarily Black neighborhood aren’t unique. Across the city, many community members have opposed the militarization of the police, especially in the wake of last year’s protests following the murder of George Floyd.

While some reforms have been implemented, such as the creation of a Civilian Police Review Board, which held its first meeting on Aug. 3, some community members are calling for further change. That change could begin with a reduction in the city’s police helicopter budget, which has been the topic of extensive debate within discussions about the size of CPD’s overall budget.

After an April 17 incident in which a police helicopter crew spelled out “CPD” above an East Side neighborhood, calls for evaluation of Columbus’ helicopter budgets and policies were renewed. But an internal review of the event found that the crew committed no misconduct, and advocates have said there’s still significant work to be done to reduce the harm CPD has caused in the communities it serves.

According to data obtained by Matter News through a public records request, Columbus’ total spending on its police helicopter fleet in the 2021 budget comes to just under $5.5 million, with the bulk of the cost — just over $3 million — coming from its payment of the 21 members of CPD’s helicopter team.

In comparison to cities of similar sizes, CPD’s helicopter fleet dwarfs others. With five copters, it has more than twice as many vehicles as Cleveland, despite the fact that both metropolitan areas boast populations of just over 2 million residents. Kansas City, Missouri, another metropolitan area of similar size, has just three police helicopters and a staff of two sergeants and six officers who work with the vehicles.

These disparities have been cited by many community members as reasons to cut the size of CPD’s helicopter fleet — but some efforts, such as an ordinance tabled by City Council in September 2020 that would have placed restrictions on police equipment, have fallen short. If passed, the ordinance would have reduced the size of CPD’s fleet from six to four helicopters.

Council President Pro Tempore Elizabeth Brown, one of the ordinance’s sponsors, said the benefits of a reduction in fleet size are twofold: less aerial surveillance would increase community trust with police and the government, and fewer helicopters in the air reduces the fleet’s cost to taxpayers. Each helicopter costs a little over $3 million to purchase, Brown said, adding that the city would receive around $1.7 million if one was sold.

During a hearing on police demilitarization at the end of June 2020, residents submitted over 900 comments about CPD’s role in the community. Over 200 of those comments were focused on helicopters in particular, centering on their cost, noise and method of surveillance as reasons for resident opposition. This hearing, Brown said, shaped her legislative priorities moving forward, including for the failed September ordinance.

“T​​he more trust there is in the community, the safer all of us are, so it's important to look for ways to demilitarize,” Brown told Matter News. “What we heard in those comments was that residents felt the presence of helicopters got in the way of that goal.”

However, legislators have continued to maintain the fleet’s current size despite the findings of the hearing. In May, City Council approved the renewal of the city’s helicopter maintenance contract for another year, with a $900,000 price tag attached, and CPD has consistently argued that the fleet’s current size allows for the most effective methods of operation, successfully swaying councilmember.

With a new helicopter approved for purchase at the end of 2019, it’s clear opponents of CPD’s fleet as it currently exists may face an uphill battle. But for some community members who say police militarization within the city and the existing helicopter force are detrimental to the community, it’s a battle worth fighting.

At home, the concerns were similar. Often, Villavicencio would return home to see a police car sitting outside their apartment complex, an occurrence they said divided the community they lived in by causing distrust and isolation. Add in the constant helicopter presence, and Villavicencio said they felt unsafe in their own neighborhood because of CPD.

Eventually, Villavicencio became overwhelmed. They were considering moving out of North Linden, but the increase in police violence was the last straw, prompting them to leave Columbus entirely. Villavicencio and their partner moved in January to a new city, and since then they said their mental health has improved.

“Right when I made the decision to move, there would always be shootings, and police violence kind of continued to escalate. Not worrying if a stray bullet is gonna fly through my window, it helps your mental health.”
Sid Villavicencio, former Columbus resident

Sonya Fix, a Columbus native and current resident of the city’s southeast side, has had negative experiences with CPD for decades. As a teenager, she saw police use excessive force against a young child, and in recent years, she’s seen CPD perpetrate violence against herself and her neighbors at a variety of peaceful protests.

Last summer, she said police presence in her neighborhood was at an all-time high, with helicopters hovering over her area for over a half hour at a time. Having lived in the city for an extended period of time, Fix said she can tell when there’s an active search going on, and the copters’ presence very rarely felt like that.

Like Villavicencio, Fix said she thought CPD’s presence and the use of helicopters was meant to intimidate residents in her primarily Black neighborhood. Though she said this summer’s helicopter presence has felt less intrusive, she still has concerns about the way CPD’s helicopter program operates, as well as the size of its budget.

Police violence has the chance to impact every Columbus resident in some way. But marginalized communities, such as the residents of the majority-Black neighborhoods Villavicencio and Fix described, are more likely to feel that impact.

According to research published in the American Journal of Public Health, Black, Indigenous, Latino and queer community members are significantly more likely to experience mental health issues prompted by interactions with the police. Those same groups are also more likely to be killed by police.

For these communities, policing is just part of a long history of state-sanctioned violence against marginalized people dating back to the country’s founding. With limited options for accountability in any form, the study found the impact of police brutality could continue to worsen for survivors, leaving life-long trauma that could affect all other aspects of their lives.

These sources of harm are a pivotal part in the debate about reducing police funding. Instead of financially supporting an organization that has historically harmed marginalized groups, many activists are calling for a reinvestment into programs that center wellness and financial support for those communities.

As a result of her experiences, Fix wants to see CPD’s funding slashed — especially for the helicopter fleet — and hopes the newly introduced Civilian Review Board will have the capability to ensure the police are held accountable to the extent she believes is needed.

“They absolutely should not have the budget that they have,” Fix said. “I would really like to see those resources be reallocated. It's absolutely unacceptable how much of the city budget goes to the police and the type of policing that they're doing.”

More helicopter restrictions from City Council are on the horizon

While recent attempts to reduce the size of the helicopter fleet haven’t been successful in city government, the fight isn’t over for legislators and community members, who said they will continue to advocate for reductions in police funding.

Brown, the City Council president pro tempore, said she is gearing up to reintroduce new legislation that will tighten restrictions on helicopter operations. This proposal, she said, will be included in wide-sweeping plans to clarify and update city policing code.

“What I'm focused on proposing is making sure the rules are fair for flight paths of the helicopters, so we're not seeing lingering over neighborhoods, and making sure those rules are really tight so that there isn't an over-presence."
Elizabeth Brown, City Council president pro tempore

Though Brown said a reduction in fleet size may not yet be feasible in City Council, she said this increased specificity will leave less room for interpretation, reducing some of the issues residents have mentioned. Brown said she is confident her colleagues will see value in her planned proposal, and hopes to see it passed in the coming months.

While the changes Brown plans to propose may be a step in the right direction, more drastic measures may be necessary in some community members’ eyes. After leaving Columbus, Villavicencio said they were even more concerned by the interactions members of their community had with CPD, having gained some perspective on the events.

As a result, Villavicencio wants to see CPD defunded — and they think intentional redirection of funds and reimagining of community-based safety is essential.

“Just as important (as defunding) is more investment in community mental health care,” Villavicencio said. “I really just want more of an emphasis on direct care towards the community.”