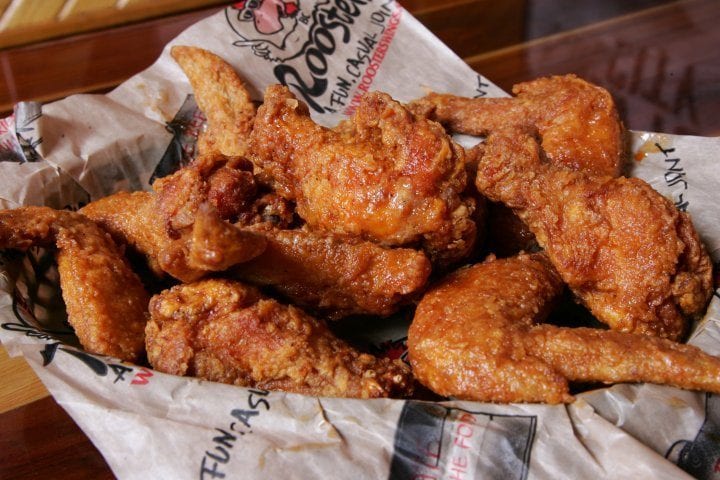 These places take their chicken wings seriously, and for that we salute them.

Some consider the wing to be a mere side item. An after thought, shoved onto the back of menus to fill out the selection. And while many restaurants and pubs are found guilty of that very act of negligence, some actually have their black belts in fried wing glory. These are restaurants that take the wing to the next level, with flavor that kicks taste bud butt like Stephen Chow going off against a horde of ax wielding mobsters (Kung Fu Hustle, excellent film, highly recommend).

We respect any place that has achieved Shaolin level mastery of the great wing technique, so we just had put together a list of the best places in Columbus. So enter humble young disciples, and make sure to try these 10 masters of the winged arts.

Known for more than just their pizza, OH Pizza and Wings sports a pretty decent list of sauces. From the Sweaty Neck to the Grippos BBQ Dry Rub, they’re going to have something hot and spicy and just up your alley.
Where:  250 N. 3rd St Columbus, OH 43215

This neighborhood bar is known for its Pepper Burger but the selection of awesome foods doesn’t stop there. Their wings are crisped just right and reasonably priced, with sauces that are straight up addictive.
Where: 2822 N High St, Columbus, OH 43202

Not only are these wings well made but you can also get a lot of them. You can order them in either regular size or huge so don’t be afraid to go all out on the poultry.
Where: 2513 Summit St, Columbus, OH 43202

This little-known place down in the Brewery District has some surprisingly delicious wings. I’m talking perfectly fried with some pretty great sauces like the Pineapple Ghost Pepper.
Where: 560 S High St, Columbus, OH 43215

It takes a lot to stack up next to Thurman’s huge titan burgers, but what their wings lack in size they make up for in flavor. Not that they’re tiny by any sense, but compared to the Thurmanator, what isn’t?
Where: 183 Thurman Ave, Columbus, OH 43206

A unique, Asian take on the fried chicken wing, Bon Chon serves them up with a side of pickled relish. You can choose from either the Soy Garlic or Spicy sauces or have them combined if you’re really adventurous.
Where:  2973 N High St, Columbus, OH 43202

If you prefer grilled wings as opposed to fried then Smokehouse is your best bet. They “brine, hickory smoke, and char finish” their wings, served up with your choice of sauce and a side of bleu cheese dressing.
Where:  1130 Dublin Rd, Columbus, OH 43215

Roosters has some of the best breaded wings in the city with convenient locations all over Columbus and Ohio. Their sauces aren’t for the faint of heart though, especially the Nu-Killer.
Where: 8 different Columbus locations. Check out their website for the restaurant nearest you.

Old Skool is another place that specializes in grilled wings and BBQ. Everything is smoked to perfection with a variety of sauces like the Thai Peanut Butter and Grape Jelly. A strange one to be sure, but pretty darn good.
Where: 2941 N High St, Columbus, OH 43202

Breaded chicken with a combination of sauce or dry rub spices, you can choose from an absurd combination of flavors. If super hot buffalo is your thing, pick up the Afterburner. More into BBQs? That’s okay, they have seven different types that you’re going to love.
Where:  1315 W Lane Ave, Columbus, OH 43221