I Early Voted In Franklin County And It Was Awesome

I’ve always been a political junky, and so I’ve always looked forward to and enjoyed election day.

Where I live, I never see a line. I usually vote in the middle of the day, and it’s easy in, easy out.

However, I’ll always remember living on the west side during the 2004 election and having to wait over two hours in line. A line that was so long, some of it involved standing outside. In the rain.

Did I see people get fed up with the rain and the wait and leave the line?

Reader, it will probably not surprise you to learn that I did. Later, it was revealed many Ohio precincts were deliberately starved of voting machines, causing those long lines.

In 2018, shenanigans over who is encouraged or discouraged to vote have only gotten worse. Voter suppression is in the news again all over America, including in Ohio, where our state leadership took their desire to purge voters all the way to the Supreme Court this summer where they won.

The Voting Rights Act of 1965, struck down by the Supreme Court in 2013, isn’t returning anytime soon, which means voter suppression will be a regular tactic for the foreseeable future. One way to combat those efforts is by voting early, which:

There’s some mystery to early voting for people who have never tried it, so I decided to check it out.

The process was easy breezy, interesting, and I’ve found it to be sort of mentally relieving to have my vote out of the way already. I’ve found it particularly pays off every time I read distressing political news.

When you pull up to the location on Morse Road, there’s kind of a carnival atmosphere, with loads of candidate signs and people offering voting guides. 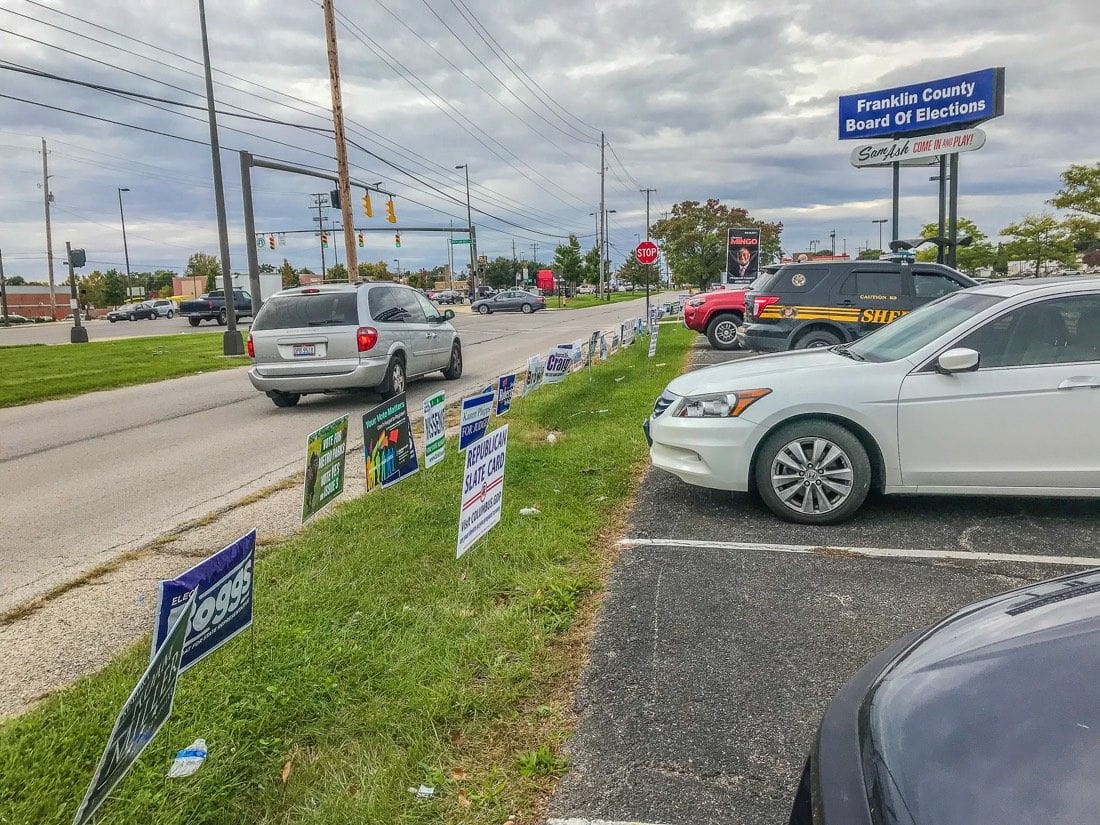 Nobody is pushy though, and it’s easy to park and find your way.

Once you enter, it’s very quick and simple. You fill out a small card with your name and address. Technically you are voting absentee, so this is your absentee “application”, but it mostly serves as a precinct finder for the person who will be helping you.

Once you turn in your card, a person will walk you to your touchscreen, you’ll do your thing, finish up, and next … sticker and selfie station:

Exploring the location on Instagram reveals some selfies of just finished voters, and they are all adorable (seriously, that link will lift your spirits) especially this very good police dog:

The very best part of voting early on Morse Road? The location.

So think about it. Knock voting off the to do list early and then go eat some dumplings from the best restaurant in Columbus, and spend some time wandering around a grocery store so good it’s received national attention. Take a friend and make a whole outing of it.

Good luck. We’re all counting on you.