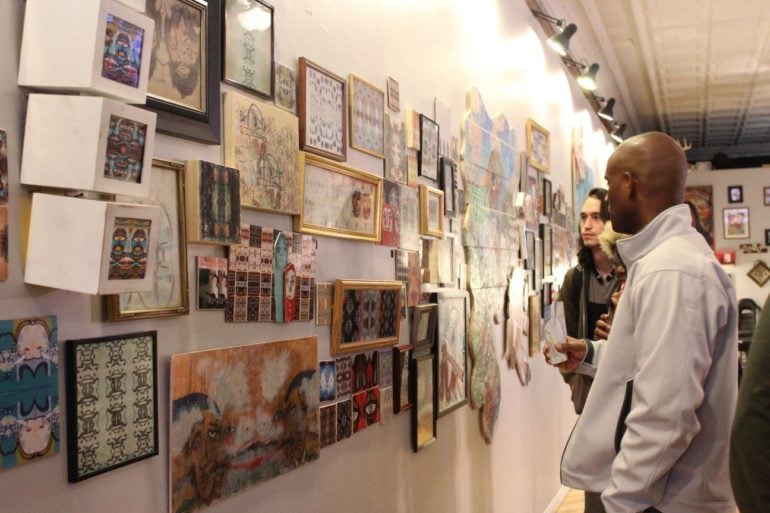 Chomping At The Bit: Debating The Columbus Arts Scene

“What art scene.” The stranger next to me scoffed, his face reflecting a bright orange glow from the fire as he exhaled a train of smoke from his cigarette.

The November chill nipped at me from around the limits of the fire’s warmth. My face and chest were completely and pleasantly toasty but my feet and the rear of my body were miserable. My fingers fidgeted irritably from the inside of my jacket pockets, flailing about stubbornly to generate their own desperate heat.

My mind quickly perused a mental Rolodex of witty retorts and interesting facts about the music and art scene in Columbus. We were on the back patio of a bar in Olde Towne East, itself a neighborhood full of artists and folks seeking work in fields that require tenacity if not passion. What was interesting was that I found myself unable to earnestly string together any quip or argument in defense of the city’s “scene”.

I floundered about in disagreement (mostly out of contrarian habit and a great deal of whiskey-fueled angst) but I had no dog in the fight. I felt apathetic and at a loss for words– a special sort of rarity.

But we continued to talk and he told me his story. About how he had left Columbus to pursue art in New York, about his opiate fuelled fall from grace, and his slow meandering defeat in returning home. A warrior returned from war with scars but no valor. I could see a disdain for the city in his eye, and I realized now why I found it so difficult to formulate an argument: I didn’t entirely disagree.

His story wasn’t unfamiliar to me. I’ve heard it time and again, from strangers and friends alike. The most brilliant artistic minds I’ve ever encountered in this city have, at one point, imagined widening the boundaries of the Columbus scene. Bright eyed and optimistic they charged headfirst into music, comedy, theater, dance.

They came equipped with Stratocasters and jokes and vinyl hearts that eventually broke under the needle of a city’s inept grace.

Eventually, each of them became jaded and disillusioned by their hometown. Not necessarily because of critics or the harshness of the lifestyle or anything as trite and expected as all that, but by the scene itself. Each genre of performance made stifling and cannibalistic by the very people within it, the very same people who were meant to make it as open and nurturing as possible for younger aspiring talent. They leave no room for budding artists in a forest blanketed by their own egos. So that younger talent, made cynical by their very own roots, drift off to other cities, clutching their dreams a little closer to their chest now but holding onto them all the same.

Rapper/Actor/Playwright Jihad Milhelm was just one of those talents. His reasoning for leaving the city was because of a lack of opportunity and an inability to make a living. “There just wasn’t enough opportunity to feasibly make a living doing it that didn’t include waiting for an ensemble member of CATCO to retire. I feel like if I were just rapping I would have stayed.

The professional acting scene is largely what drove me out.”

Jihad has moved around to various cities in order to carve a creative niche for himself but he seems to have found a place within the Denver, Colorado arts community. He’s written a play that’s planned to be produced by Fearless Theatre next winter. It’s entitled ‘Mosque’ and tells the story of a Jordanian Muslim immigrant father and his first-generation American son. The play explores the intricacies of family and personal identity, all the while set against the backdrop of New York City during the 2010 Ground Zero/Mosque controversy.

Still, others disagree wholeheartedly. Artist and thinker Marcus P. Blackwell believes that the art scene may have been like that in the past but at present isn’t just flourishing into its own but thriving. “I’ve lived in Columbus long enough to watch its arts scene evolve into the inclusive, diverse scene it keeps dreaming it could be. It used to be far more exclusive and far more elitist. Gatekeepers and doors and secret passwords and such.”

He doesn’t see the use in comparing Columbus creatives to their Chicago, New York, or L.A. counterparts. The city’s own identity is one that’s been developing over the years and he feels like it has just about ripened into its own.

He isn’t blind to its stagnancy or fear of risk and change, but he sees within it the potential to transcend all that.

“My one largest complaint is I wish the creativity would spread to other forms of expression.” He mused, “I, too, wish for more of it to be subversive and provocative and maybe even a little bit dangerous. But to that point, here is the thing: Columbus is fertile ground for that. These are ugly times and there are legions of discontented, maladjusted creative riff raff chomping at the bit for revolution and change, and an opportunity to fill the world with the beauty of truth. They just need to learn to pool their resources.”

And that, in itself, got to the heart of just what bothered me. It wasn’t whether not Columbus has an art scene, it was whether or not we had one that existed outside of “Ugg boot basic”. Was any of it really subversive or provocative? When most people imagine the Columbus arts scene they think of Gallery Hop, the Columbus Museum of Art, maybe even the occasional small-scale showing at the local cafe. It all folds neatly with crisp corners and inoffensive images and pleasant hummus/hors d’oeuvre-things that pair wonderfully with mid-shelf wine.

But are we lacking grit? Is the Columbus art scene all class and no spine? Would a Columbus theatre have produced ‘Mosque’?

Back at the fire, our conversation had turned into the sort of full-blown obnoxious conversation you’d be loathed to overhear at any sort of “young urban creative” haunt in the city. I jabbed out a feeble but pragmatic defense of the arts scene while he swung wide, open guard haymakers with these preposterous and inflammatory statements that I could have easily avoided but stepped directly into anyway (I was a bit whiskey-addled at the time and more than a little masochistic). I insisted on the city’s charm and the individuality of its artists. He responded by calling the Columbus art scene a commercialized outlet mall set only to peddle a sanitized and safe image for the city. I was more than a bit perturbed at that, I was furious. My mouth opened ready to hurl a slur, some scathing truth that would put this pretentious, privileged, punk hipster in his place. But I stopped, flustered and flushed. Was he right? I decided to drop the whole thing and lit a cigarette instead.