From muralists to world-renowned sculptors, we have some seriously impressive artists that have contributed to our city’s artistic landscape over the years.

Public art is important for communities. Studies show that public art can benefit communities in ways that you might not expect. It can help fight feelings of anxiety and social isolation.

Public art can also influence a host of economic factors, including increased tourism and marketing. Plus, this kind of art has a unique ability to reach people of all backgrounds. Unlike museums and galleries, which may feel prohibitive, public art can be viewed for free and gives people the chance to feel represented within their own communities.

For many people in Columbus, public art became a ray of hope in the summer of 2020. As we were dealing with the beginning stages of the pandemic and a summer of protests after the murder of George Floyd, murals and art installations around the city became a way to find beauty at a confusing, overwhelming time.

But public art has a much longer history in this city than that. Over the years, different sculptures, murals, and installations have had a big impact on our community. There are hundreds of pieces of art on display around this city.

We’ve gathered our “must-see” pieces here into one list, but this is just a starting point. If you’d like to dive deeper into the incredible art around this city, there’s one resource you can’t overlook.


About: Installed in 2015, Scioto Lounge features three deer sculptures casually hanging out along the Scioto riverfront. The most famous of the three statues, created by artist Terry Allen, stands on the Rich Street bridge overlooking one of the best views of the city.
Location: Genoa Park and the Rich Street Bridge

READ MORE: Here’s The Deal With The Scioto Deer


About: The Slingshot has quickly become one of the favorite sculptures in the city. Located in Franklinton, the massive slingshot was created by artist Andrew Lundberg and is “a kinetic representation of the link between Columbus and Franklinton.” It’s an interactive installation, so feel free to put yourself in the slingshot for a picture.
Location: 258 Lucas St, Columbus, OH, 43215


About: Standing 14 feet tall with nearly a million LED’s in the shape of a head, As We Are is one-of-a-kind. Visitors can head inside the sculpture where a 3D image of their head will be taken. Once back outside, that image will be projected on the giant face of As We Are. Columbus College of Art & Design professor Matthew Mohr is the creator of this unique sculpture, which was installed in 2017.
Location: North Atrium of the Greater Columbus Convention Center, 400 N. High St, Columbus, OH 43215


About: What began as a temporary exhibit in 2019 has become a permanent installation in Schiller Park. Created by Polish artist Jerzy Jotka Kdziora, the original traveling exhibitions, which have since moved to Sandusky, included 23 suspended sculptures throughout the park and other locations in the city. The exhibit remained on display longer than expected due to the pandemic and the community fell so in love that Friends of Schiller park raised the money to have a permanent installation. The Rower is by far the most popular, suspended over the pond at the park.
Location: Schiller Park, 1069 Jaeger St, Columbus, OH 43206

In Principle and Practice


About: Located outside of the Ohio Supreme Court, In Principle and Practice is a sculpture fountain that uses the power of words to create. The sculpture was created by artist Malcolm Cochran, who has an impressive list of works including the Goodale Park fountain and Dublin’s iconic Field of Corn, known colloquially as cornhenge.
Location: 145 S Front St, Columbus, OH, 43215 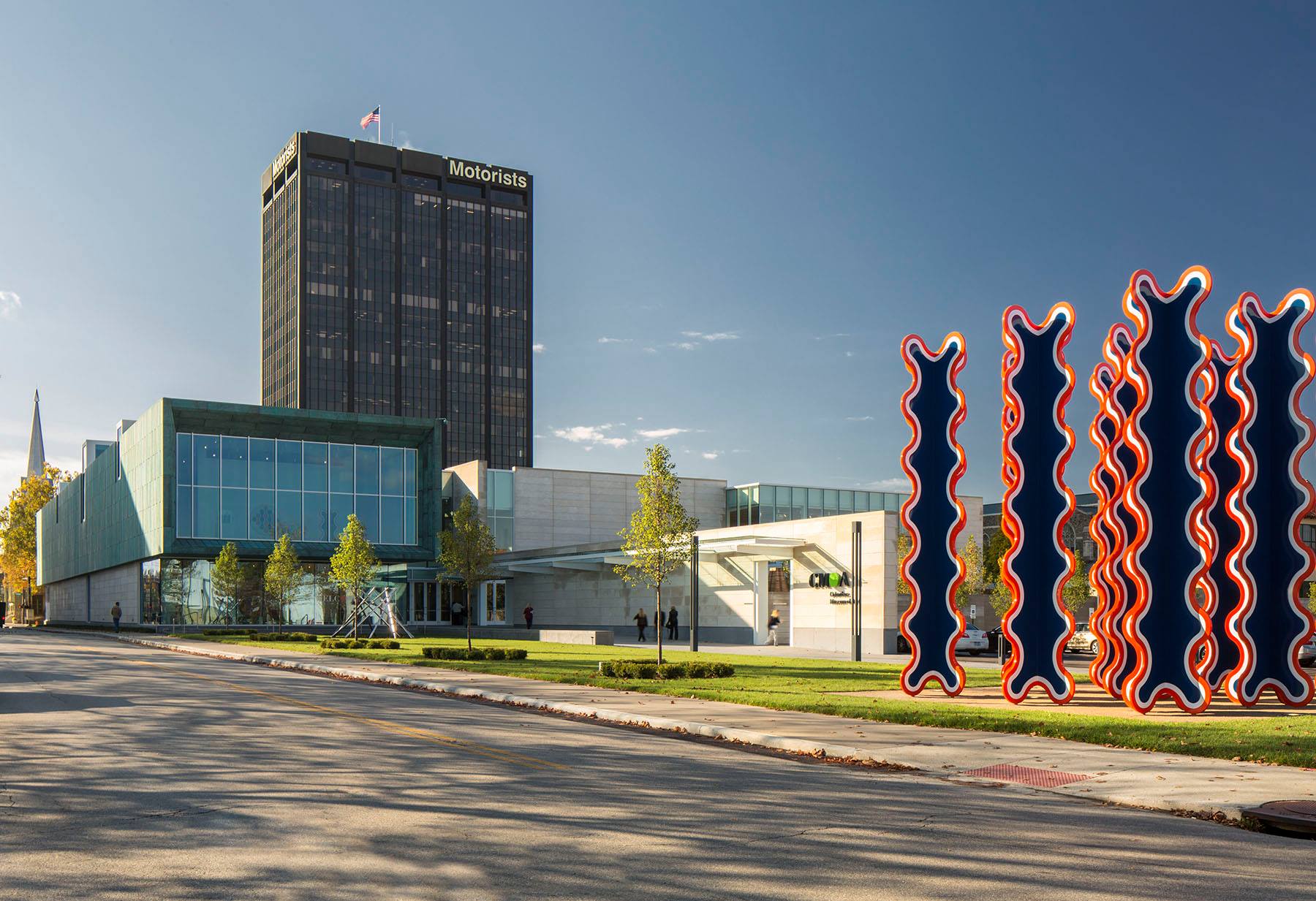 
About: This massive sculpture was installed at Franklin Park Conservatory during the extravaganza that was AmeriFlora in 1992. The piece was created by artist Stephen Canneto and served to mark the 500th anniversary of Christopher Columbus’ first journey to the Americas.
Location: 1777 E Broad, Columbus, OH, 43205

About: There are many gorgeous works by Alfred Tibor around Columbus, so it’s hard to choose just one. But Promise for Life is beautiful, both in appearance and the meaning behind the art. Tibor was a holocaust survivor and created the sculpture as a way to encourage interfaith discussions. The bronze sculpture of rising flames reaches an impressive height of 27 feet.
Location: Trinity Lutheran Seminary at Capital University, 2199 East Main St, Columbus, Ohio 43209


About: The Short North Arts District is home to the most significant public art installation in the City of Columbus’ history, The Makers Monument. The 20’ tall crystalline sculpture is inspired by the shapes of items that have been made in Columbus throughout our city’s history.
Location: 815 N High St, Columbus, OH, 43215

A post shared by Friends of Schiller Park (@friendsofschillerpark)


About: The Umbrella Girl holds a special place in the heart of many Columbus residents. I don’t know if it’s because she feels peaceful, or a little bit magical, but this iconic fountain sculpture has been the backdrop to many special moments. The Umbrella Girl was created by Joan Wobst and installed in the park in 1996.
Location: Schiller Park, 1069 Jaeger St, Columbus, Ohio, 43215

Unicorn in the Garden


About: Based on James Thurber’s unicorn fable from “Fables For Our Time,” the Unicorn in the Garden sculpture is whimsical and fun. The sculpture was made by Jack Greaves in 1987 and stands nearby the Thurber House.
Location: 67 Zimmerman Ct, Columbus, OH, 43215


About: Easton may not be the first place you think of when you’re heading out to explore public art, but you definitely shouldn’t leave it off the list. There are some really amazing installations there, but Urban Hearth is one of my favorites. It’s cozy and inviting, and it does a great job of conveying the spirit of modern gathering spaces.
Location: between Forbidden Root and Ivan Kane’s Forty Deuce at Easton


About: This duo of murals is one of the most popular destinations for the perfect Instagram snap in Columbus. A visit during the day is the perfect time to enjoy the bright, bold colors of the Color Wall. A visit at night means you’ll have the chance to see the LOVE mural all lit up.
Location: 220 E Main St, Columbus, Ohio, 43215


About: The Chakra Mural is so much more impressive in person than photos can ever give it credit for. It’s quite large and it certainly stands out in its surroundings. The mural was created by artist Ryan Oreweiler.
Location: 492 E. Mound St., Columbus, OH, 43215


About: There’s something very comforting about the Hope mural by Jeremy Jarvis. The Mural was completed with the help of Harmony Project and Kind Columbus Volunteers.
Location: 245 N Grant Ave, Columbus, OH, 43215

About: If someone told me to picture a mural in columbus, this is the first thing that would come to mind. The iconic mural was created by Steve Galgas and Mike Altman. It’s been standing proudly in the Short North for 20 years and it has become a popular public art destination for both residents and visitors.
Location: 8 E Lincoln St, Columbus, Ohio, 43215

About: Created by artists Eric Skotnes and Ryan Sarfati, The Journey is a stunning, 11,000 square foot three-piece mural installation. The mural depicts the voyage of a hummingbird connecting man to the gods and its scale is immense.
Location: 750 N High St, Columbus, OH, 43215

Art is Good for You


About: There’s something so simple and elegant about the upfront statement this mural by artist Clint Davidson makes. Art is good for you, especially when it’s fun, engaging, and free.
Location: 1382 S 4th St, Columbus, OH 43207