The 2021-22 CAPA & Broadway In Columbus Lineup Is Out, With Some Changes To Hamilton (Plus: Wicked!) 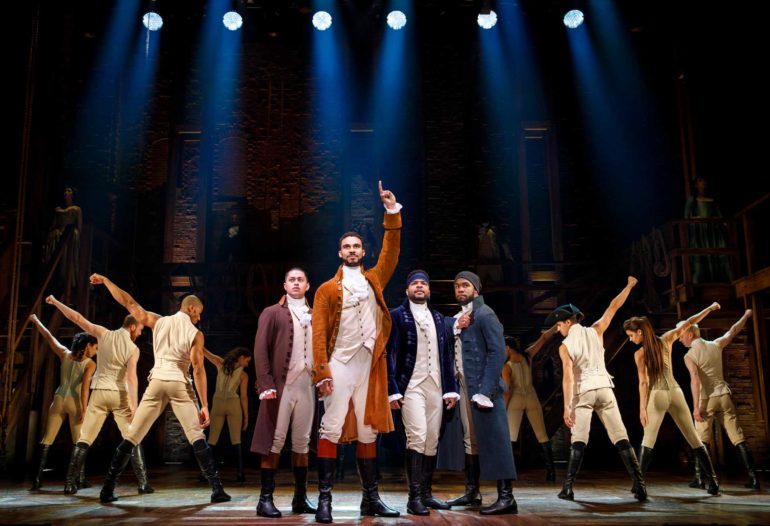 CAPA and Broadway in Columbus announced the lineup for the 2021-22 Broadway season earlier this year, and there have now been some changes.

Due to the pandemic, the season had to be rescheduled. Luckily, five of the six previously scheduled productions were successfully rescheduled. And not to get you too excited, but there’s now two bonus productions.

Hamilton will be back in Columbus in all its glory. I had the chance to see the show when it was in town last time and it was incredible. Subscriptions for season tickets are on sale now. According to CAPA, safety protocols for performances are being evaluated and will be announced at a later date. Subscriptions can be purchased right here at the CAPA Broadway In Columbus website.

The 2021-22 Broadway in Columbus season is as follows:

HADESTOWN
When: November 16-21, 2021
Where: Ohio Theatre
Show description: COME SEE HOW THE WORLD COULD BE.

Welcome to HADESTOWN, where a song can change your fate. Winner of eight 2019 Tony® Awards, this acclaimed new musical by celebrated singer-songwriter Anaïs Mitchell and innovative director Rachel Chavkin (Natasha, Pierre & The Great Comet of 1812) is a love story for today… and always.

Intertwining two mythic tales — that of young dreamers Orpheus and Eurydice, and that of King Hades and his wife Persephone — HADESTOWN is a haunting and hopeful theatrical experience that grabs you and never lets go.

FIDDLER ON THE ROOF
When: December 14-19, 2021
Where: Palace Theatre
Show description: Tony®-winning director Bartlett Sher and the team behind South Pacific, The King and I and 2017 Tony-winning Best Play Oslo, bring a fresh and authentic vision to this beloved theatrical masterpiece from Tony winner Joseph Stein and Pulitzer Prize winners Jerry Bock and Sheldon Harnick.

The original production won ten Tony Awards, including a special Tony for becoming the longest-running Broadway musical of all time. You’ll be there when the sun rises on this new production, with stunning movement and dance from acclaimed Israeli choreographer Hofesh Shechter, based on the original staging by Jerome Robbins. A wonderful cast and a lavish orchestra tell this heartwarming story of fathers and daughters, husbands and wives, and the timeless traditions that define faith and family.

Featuring the Broadway classics “Tradition,” “If I Were a Rich Man,” “Sunrise, Sunset,” “Matchmaker, Matchmaker” and “To Life,” FIDDLER ON THE ROOF will introduce a new generation to this uplifting celebration that raises its cup to joy! To love! To life!

CATS
When: January 11-16, 2022
Where: Ohio Theatre
Show description: CATS, the record-breaking musical spectacular by Andrew Lloyd Webber that has captivated audiences in over 30 countries and 15 languages, is now on tour across North America!

Audiences and critics alike are rediscovering this beloved musical with breathtaking music, including one of the most treasured songs in musical theater—”Memory”. Winner of 7 Tony Awards® including Best Musical, CATS tells the story of one magical night when an extraordinary tribe of cats gathers for its annual ball to rejoice and decide which cat will be reborn. The original score by Andrew Lloyd Webber (The Phantom of the Opera, School of Rock, Sunset Boulevard), original scenic and costume design by John Napier (Les Misérables), all-new lighting design by Natasha Katz (Aladdin), all-new sound design by Mick Potter, new choreography by Andy Blankenbuehler (Hamilton) based on the original choreography by Gillian Lynne (Phantom) and direction by Trevor Nunn (Les Misérables) make this production a new CATS for a new generation!

COME FROM AWAY
When: February 8-13, 2022
Where: Ohio Theatre
Show description: The true story of the small town that welcomed the world.

Broadway’s COME FROM AWAY has won Best Musical all across North America!

The New York Times Critics’ Pick takes you into the heart of the remarkable true story of 7,000 stranded passengers and the small town in Newfoundland that welcomed them. Cultures clashed and nerves ran high, but uneasiness turned into trust, music soared into the night, and gratitude grew into enduring friendships.

Don’t miss this breathtaking new musical written by Tony nominees Irene Sankoff and David Hein, and helmed by this year’s Tony Award-winning Best Director, Christopher Ashley. Newsweek cheers, “It takes you to a place you never want to leave!”

BEAUTIFUL – THE CAROLE KING MUSICAL (subscriber season option)
When: March 11-12, 2022
Where: Palace Theatre
Show description: Long before she was Carole King, chart-topping music legend, she was Carol Klein, Brooklyn girl with passion and chutzpah. She fought her way into the record business as a teenager and, by the time she reached her twenties, had the husband of her dreams and a flourishing career writing hits for the biggest acts in rock ‘n’ roll. But it wasn’t until her personal life began to crack that she finally managed to find her true voice.

BEAUTIFUL—The Carole King Musical tells the inspiring true story of King’s remarkable rise to stardom, from being part of a hit songwriting team with her husband Gerry Goffin, to her relationship with fellow writers and best friends Cynthia Weil and Barry Mann, to becoming one of the most successful solo acts in popular music history. Along the way, she made more than beautiful music, she wrote the soundtrack to a generation.

Featuring a stunning array of beloved songs written by Gerry Goffin/Carole King and Barry Mann/Cynthia Weil, including “I Feel The Earth Move,” “One Fine Day,” “(You Make Me Feel Like) A Natural Woman,” “You’ve Got A Friend” and the title song, Beautiful has a book by Tony Award® nominee and Academy Award®-nominated writer Douglas McGrath, direction by Marc Bruni, choreography by Josh Prince and took home two 2014 Tony Awards and the 2015 Grammy® for Best Musical Theater Album.

PRETTY WOMAN: THE MUSICAL
When: March 29 through April 3, 2022
Where: Ohio Theatre
Show description: After an incredible record-breaking run on Broadway, Audience Choice Award Winner Pretty Woman: The Musical will be on tour in the fall of 2020! One of Hollywood’s most beloved stories of all time, Pretty Woman: The Musical is brought to life by a powerhouse creative team representing the best of music, Hollywood, and Broadway. Featuring direction and choreography by two-time Tony Award®-winner Jerry Mitchell (Kinky Boots, Legally Blonde), an original score by Grammy®-winner Bryan Adams and Jim Vallance (“Summer of ’69”, “Heaven”), and a book by the movie’s legendary director Garry Marshall and screenwriter J.F. Lawton. Pretty Woman: The Musical will lift your spirits and light up your heart. “If you love the movie, you’ll love the musical!” (Buzzfeed)

Featured in the musical is Roy Orbison and Bill Dee’s international smash hit song ‘Oh, Pretty Woman’ which inspired one of the most beloved romantic comedy films of all time. Pretty Woman the film (produced by Arnon Milchan – New Regency Productions) was an international smash hit when it was released in 1990. Now 30 years later, Pretty Woman: The Musical still “Dazzles!” (Deadline) and is “Big Romance & Big Fun!” (Broadway.com) “Irresistible! A romantic fantasy. A contemporary fairy tale.” says The Hollywood Reporter, Pretty Woman delivers on all the iconic moments that you remember. Get ready to experience this dazzlingly theatrical take on a love story for the ages.

Are you ready to fall in love all over again?

Wicked (Subscriber season option)
When: May 18 through June 5, 2022
Where: Ohio Theatre
Show description: So much happened before Dorothy dropped in.

WICKED, the Broadway sensation, looks at what happened in the Land of Oz…but from a different angle. Long before Dorothy arrives, there is another girl, born with emerald-green skin—smart, fiery, misunderstood, and possessing an extraordinary talent. When she meets a bubbly blonde who is exceptionally popular, their initial rivalry turns into the unlikeliest of friendships…until the world decides to call one “good,” and the other one “wicked.” With a thrilling score that includes the hits “Defying Gravity,” “Popular” and “For Good,” WICKED has been hailed by The New York Times as “the defining musical of the decade.” Time Magazine cheers, “if every musical had the brain, the heart, and the courage of WICKED, Broadway really would be a magical place.” The Gershwin Theatre on 50th Street and Broadway is that magical place. From the first electrifying note to the final breathtaking moment, WICKED—the untold true story of the Witches of Oz—transfixes audiences with its wildly inventive story. It will send your spirits soaring to heights you’ll never forget.

HAMILTON
When:October 4 through October 23, 2022
Where: Ohio Theatre
Show description: HAMILTON is the story of America then, told by America now. Featuring a score that blends hip-hop, jazz, R&B and Broadway, HAMILTON has taken the story of American founding father Alexander Hamilton and created a revolutionary moment in theatre—a musical that has had a profound impact on culture, politics, and education. With book, music, and lyrics by Lin-Manuel Miranda, direction by Thomas Kail, choreography by Andy Blankenbuehler, and musical supervision and orchestrations by Alex Lacamoire, HAMILTON is based on Ron Chernow’s acclaimed biography. It has won Tony®, Grammy®, and Olivier Awards, the Pulitzer Prize for Drama, and an unprecedented special citation from the Kennedy Center Honors.