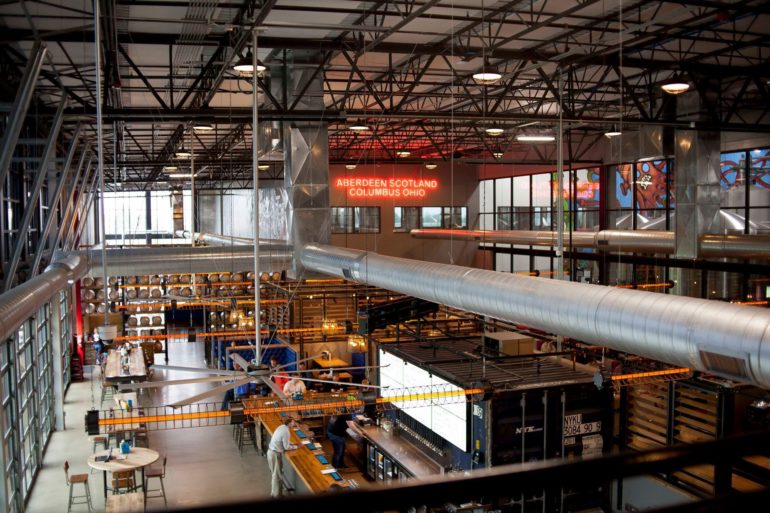 It’s been a two-year journey for Scottish beer manufacturers, BrewDog. But starting in June, they will officially be brewing beer out of their US location. 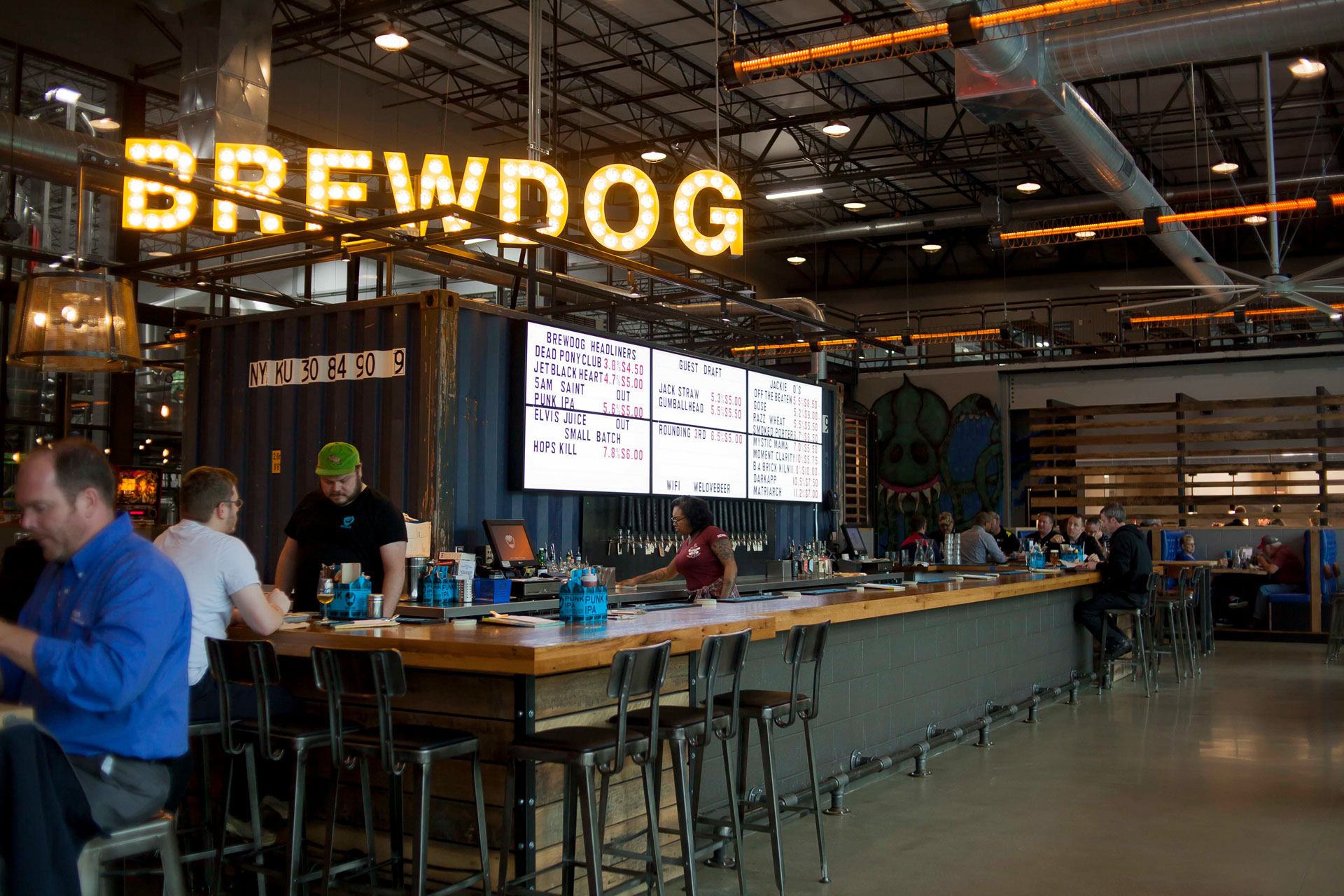 How did a worldwide sensation end up in Central Ohio? It’s almost as if it was meant to be.

“When James first flew to Columbus, when he landed, he sent a tweet out like he usually does. He just said, ‘Hey, I’m in Columbus, can anyone recommend somewhere to grab a beer?‘” explained Ben Stewart, Head of Sales and Marketing in the USA.

“He got hundreds of replies. Everywhere that he’d been in America, he’d never got that kind of love on his twitter, just from saying, ‘hey I’m here.’ People were offering to pick him up from the airport, take him out for dinner—So I think before he’d even left the airport, he just said, ‘We’re building a brewery here.’”

The excitement and enthusiasm of the community played a massive role in the choice to make BrewDog USA happen.

“It’s been a very welcoming place. Of course as a business, but for me personally as well, it’s been a nice easy transition,” said Stewart. 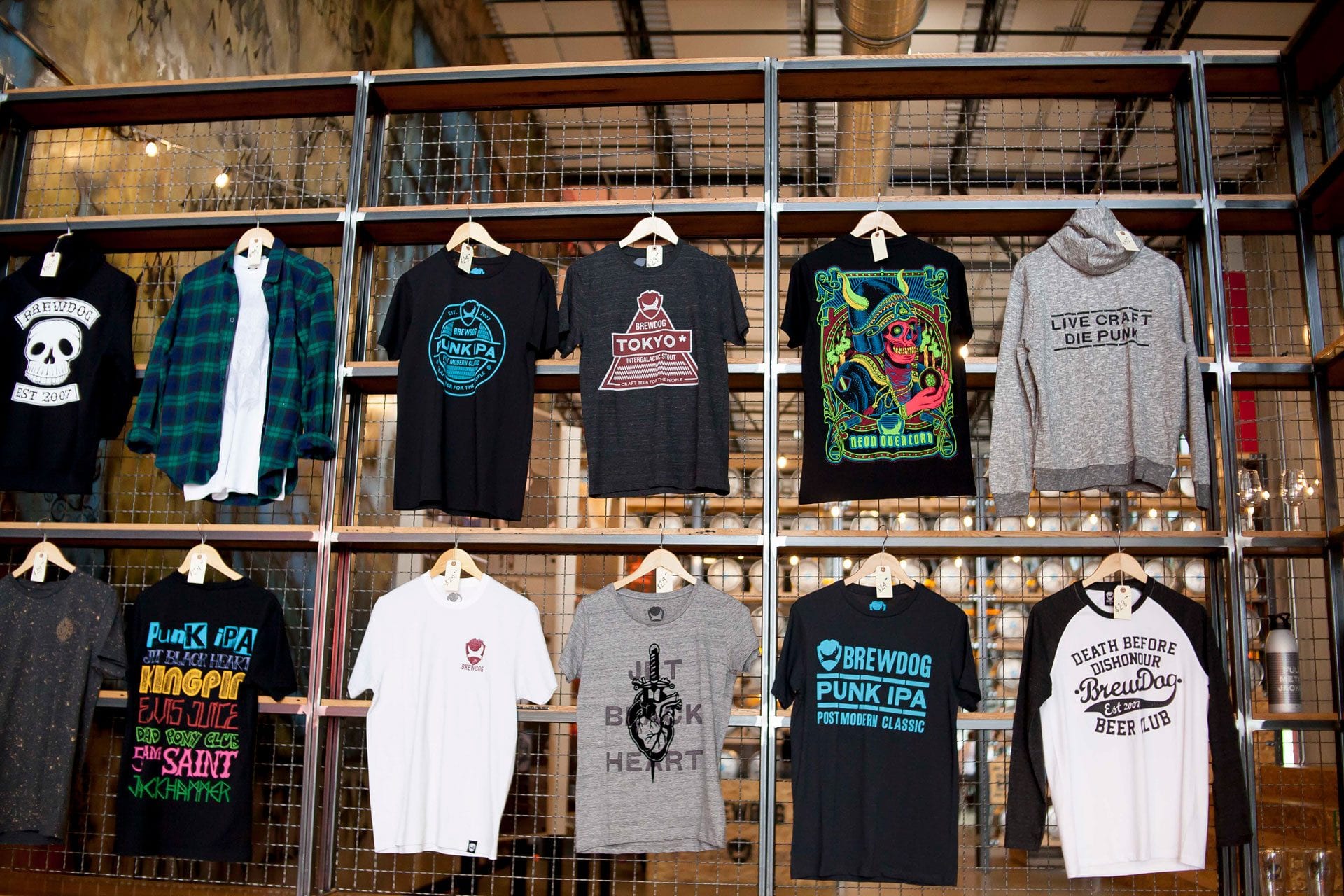 The decision to place the 100,000 sq. ft facility in Canal Winchester was based on the opportunity for growth. The brewery owns 43 acres, with only 13 used so far. Within 500 miles of BrewDog’s USA headquarters lies 50% of the US population, meaning more people will have access to truly fresh beer.

“The people from Canal Winchester have been amazing. A lot of them are locals I see quite often. It’s really good to see. It’s nice to feel like part of the community,” said Stewart. 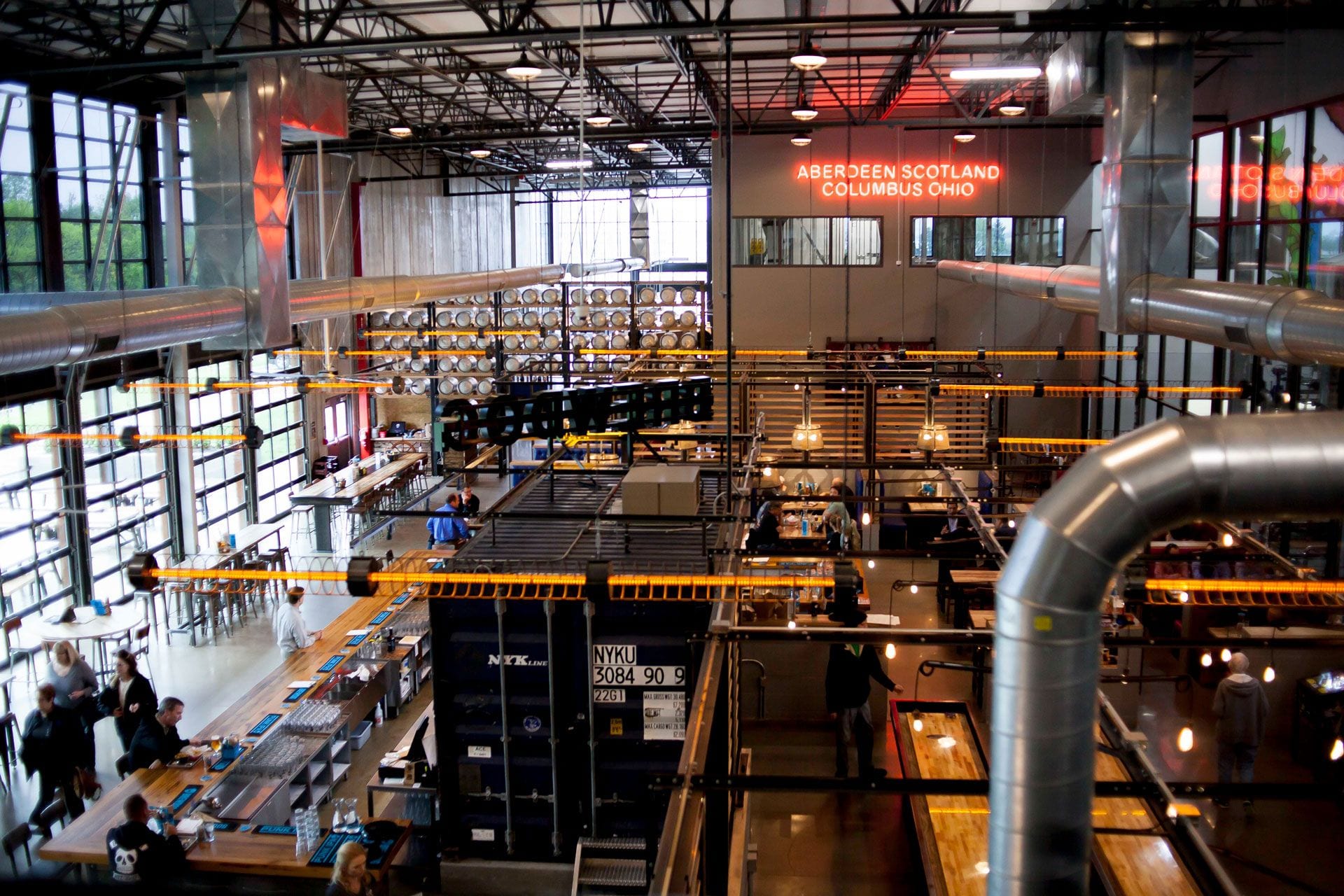 “We told Canal Winchester community that we would create 125 jobs in the first 3 years. We’ve filled about 90 already, so I think it’s safe to assume that we’re gonna exceed that,” explained Stewart.

“Which is amazing. Even when it comes to the brewery builds– 65% of the people working out on that were from the local community. We used a lot of the local trades. All of our printing, even down to our business cards are local,” he went on to explain.

Deputy General Manager Hazel Alexander couldn’t agree more. “I love it. I actually came over for 3 weeks just to help with the open. And within a week of being here, I was like, ‘Can I stay?‘” she said with a laugh.

The bar at BrewDog, called The DogTap, is one of the largest undertakings for the company. The 10,000 square foot space is open, airy, and full of aromas from the beer to the kitchen. The employees aren’t the only ones who are impressed with it. 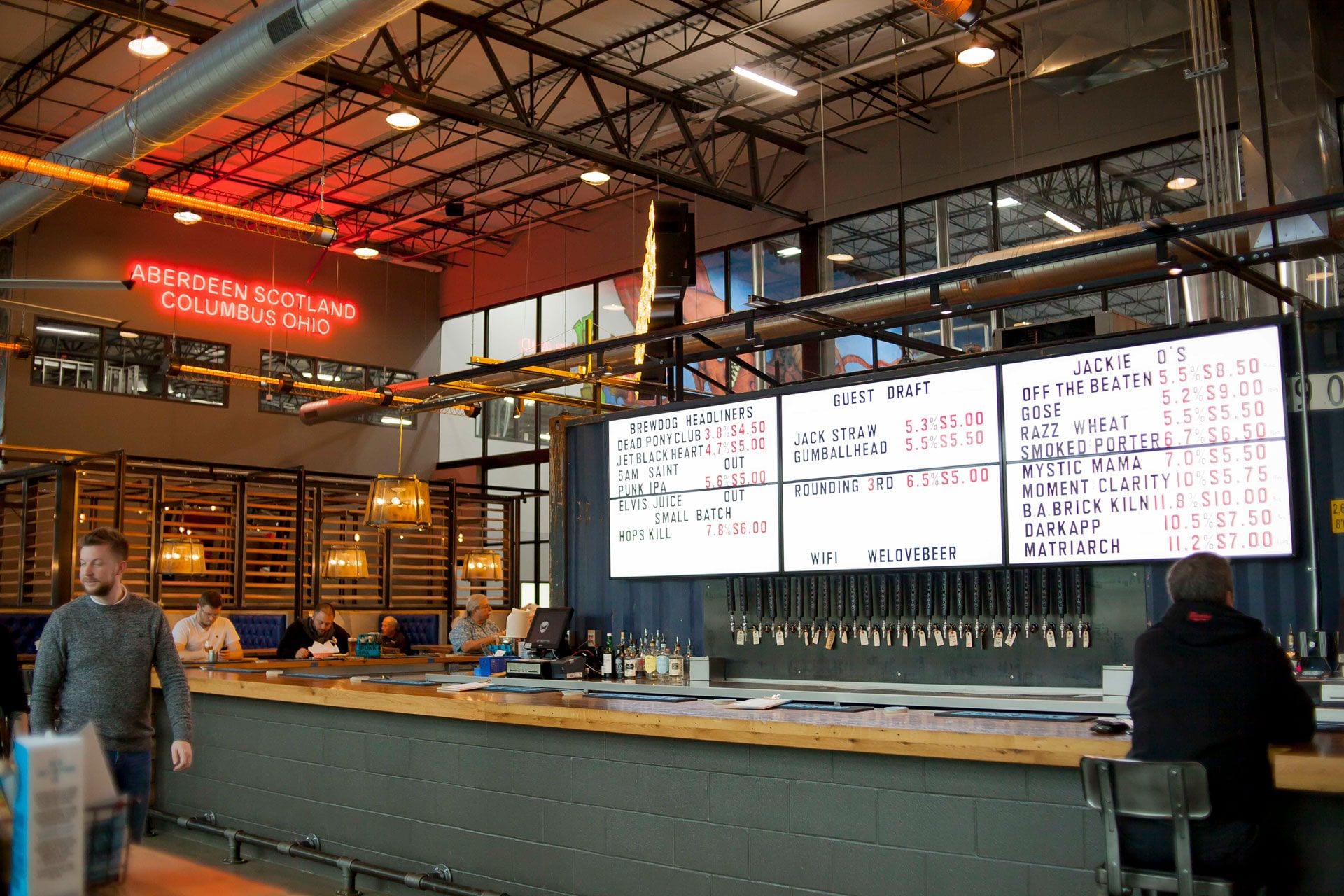 When guests enter the area for the first time, they are often surprised. “I think they’re kind of taken aback at how big the place is for a start. And how it looks as well because it’s quite “wow’, the lighting, the keg wall, the neons. It’s quite eye-catching,” said Alexander.

“What I love about all the bars we have, is that they look slightly different over the years. So BrewDog version one versus what we’re doing now, it’s very different, but you can see where we’ve come from to where we are now,” she said.

According to Hazel, BrewDog is the kind of company people dream about working for. They set employees up for success, teaching them not just how to be great at their jobs, but preparing them for future career opportunities, offering amazing benefits, and encouraging a community spirit.

BrewDog takes real pride in what they do, and if it’s not perfect the customers don’t see it.

“You know when you go somewhere and you expect it to be the best? That’s what BrewDog strives for every time. And that’s what makes people who work here strive as well,” said Alexander.

“It’s by far the best company I’ve ever worked for. They are really focused on their people and they try to give us a lot back.”

Back in Aberdeen, a man called Craig Fisher was working in BrewDog’s first bar. When the folks in charge discovered Fisher’s artistic ability, his career path completely changed. 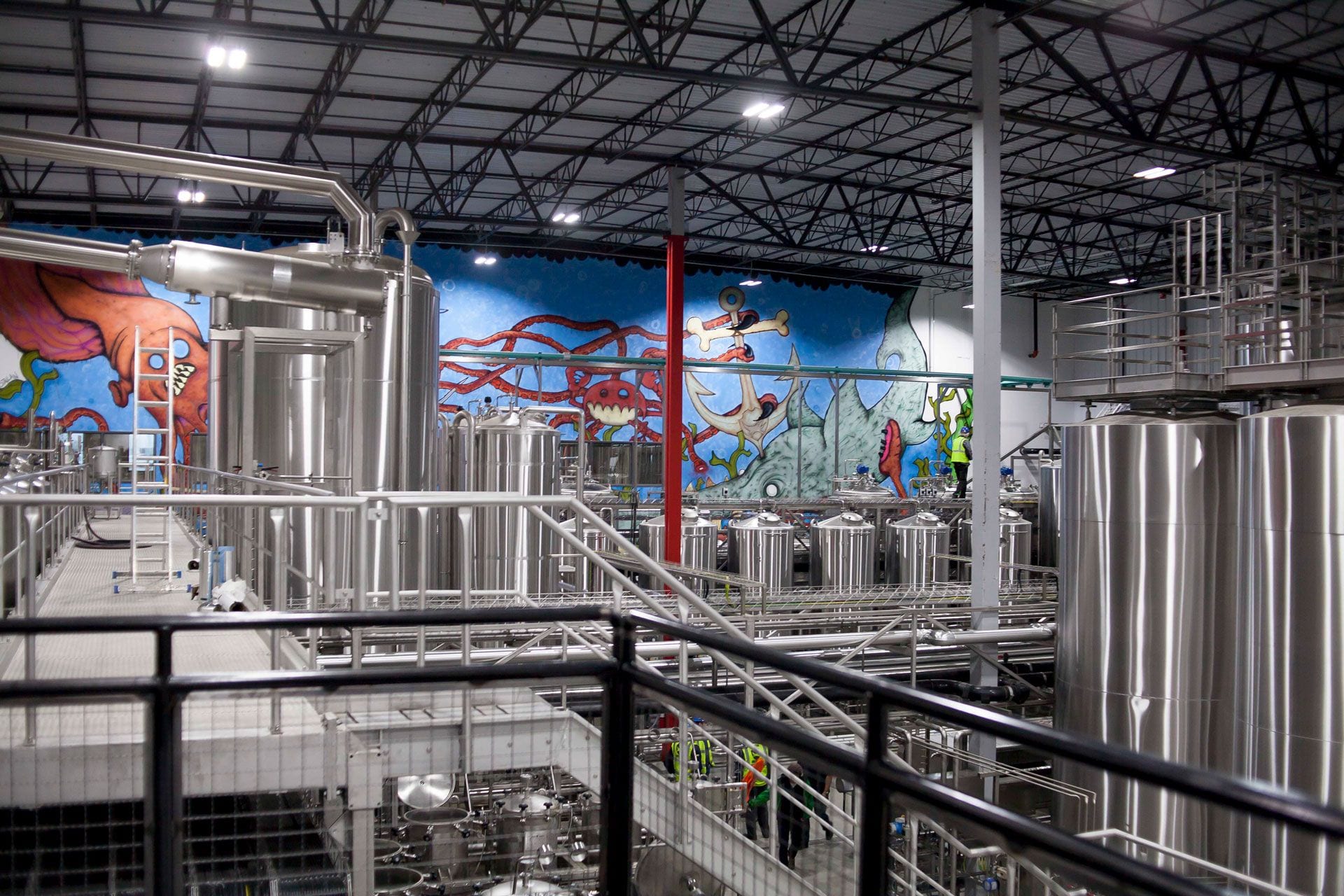 “Craig Fisher originally used to work in our first-ever bar in Aberdeen. And he did a lot of the artwork there,” said Stewart. “We recognized that he was pretty talented, and his full-time job is now creating.” 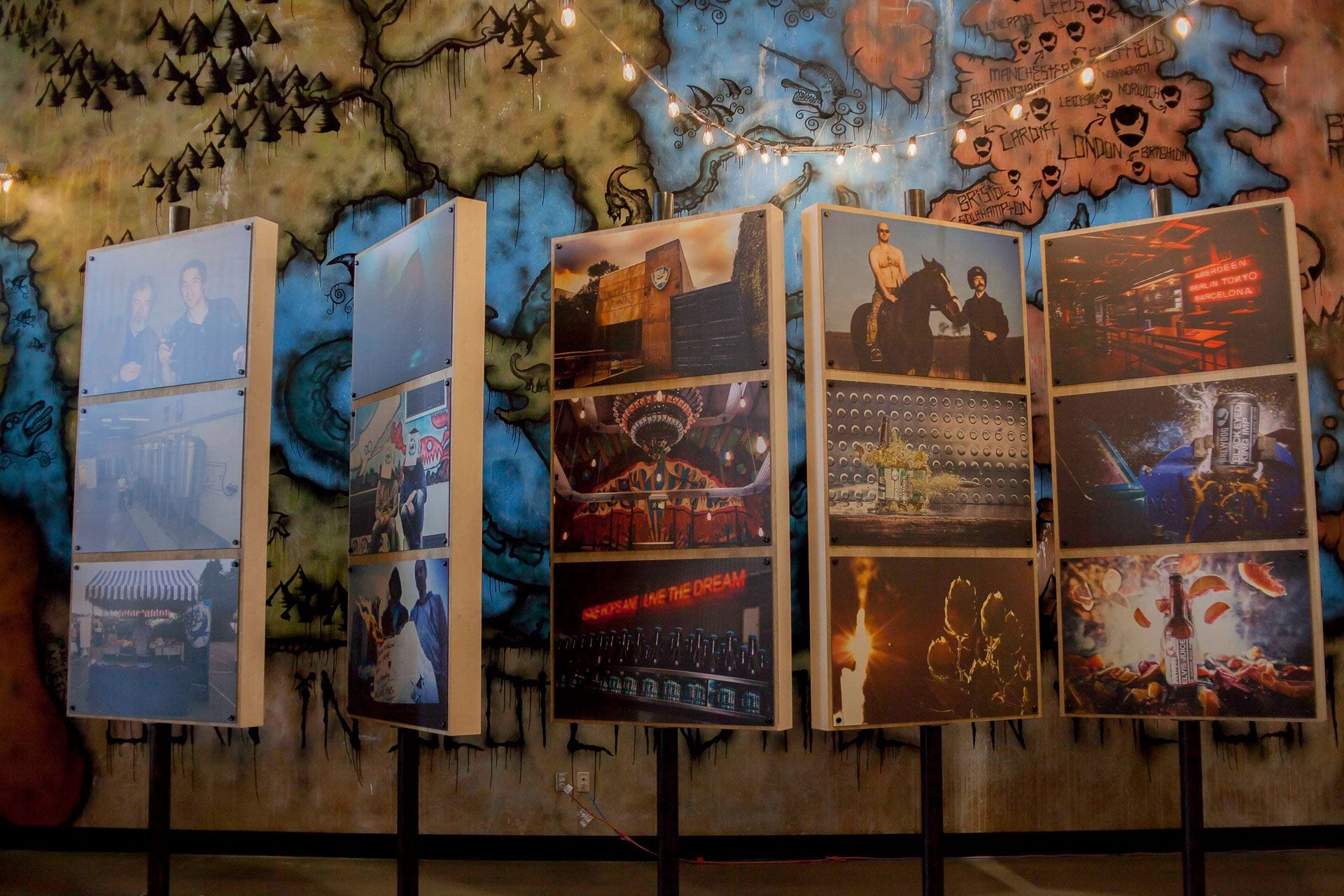 BrewDog brings Fisher to new locations around the world to paint art both inside and outside of their establishments. He also contributes to labels and designs.

The mural inside the Canal Winchester brewery took Craig and another artist 4 days to complete, and it was all done with spray paint.

From their art to marketing to customer service, BrewDog takes pride in each piece of the puzzle. But without the attention to detail one finds in their beers, the company wouldn’t be where they are today.

“I came here from Chicago. I had it for the first time a few years ago. I had been following them for a couple of years,” said Jacob Borsvold, Brewer. “I was drawn to it and their f*ck you attitude. And that was it. The beer rocks! That was what got me in.”

Jake handles the brewing operations from start to finish. From the moment the grain comes into the building to the moment the beer leaves, he’s keeping an eye on it. One of the biggest challenges for BrewDog USA will be matching continuity with the brewery in Scotland.

“We’re importing all of our malt from the UK,” explained Borsvold. “We want to have everything as consistent with the Scotland operation, so we’re using the same malt, same hops, same yeast, same everything.” 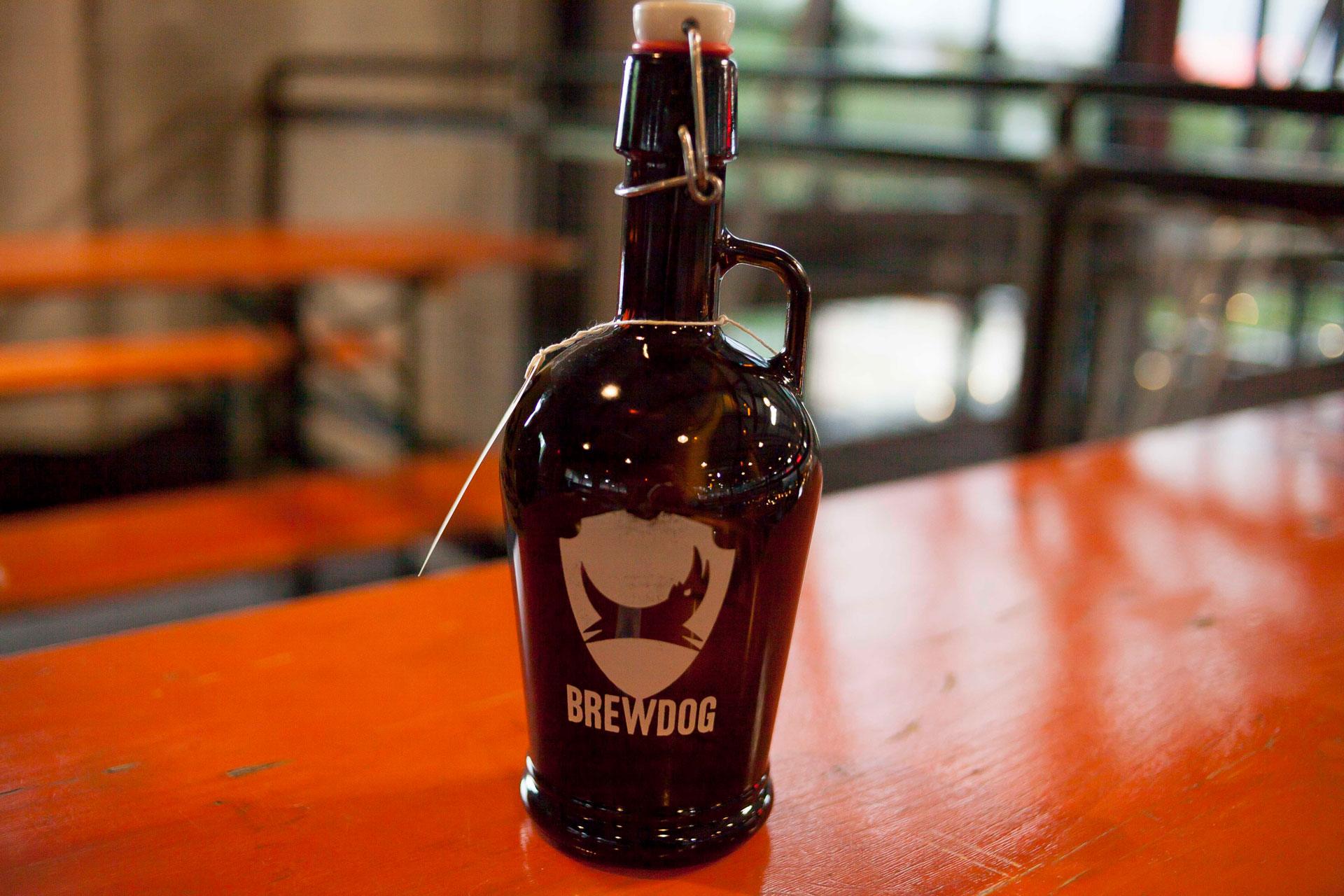 “The people are awesome. It’s been cool getting other people’s perspectives on beer. Getting into the whole BrewDog culture has been really cool,” he said.

“We all feel like we have skin in the game here. No one has the attitude that they know it all. We’re all learning together in this experience.” 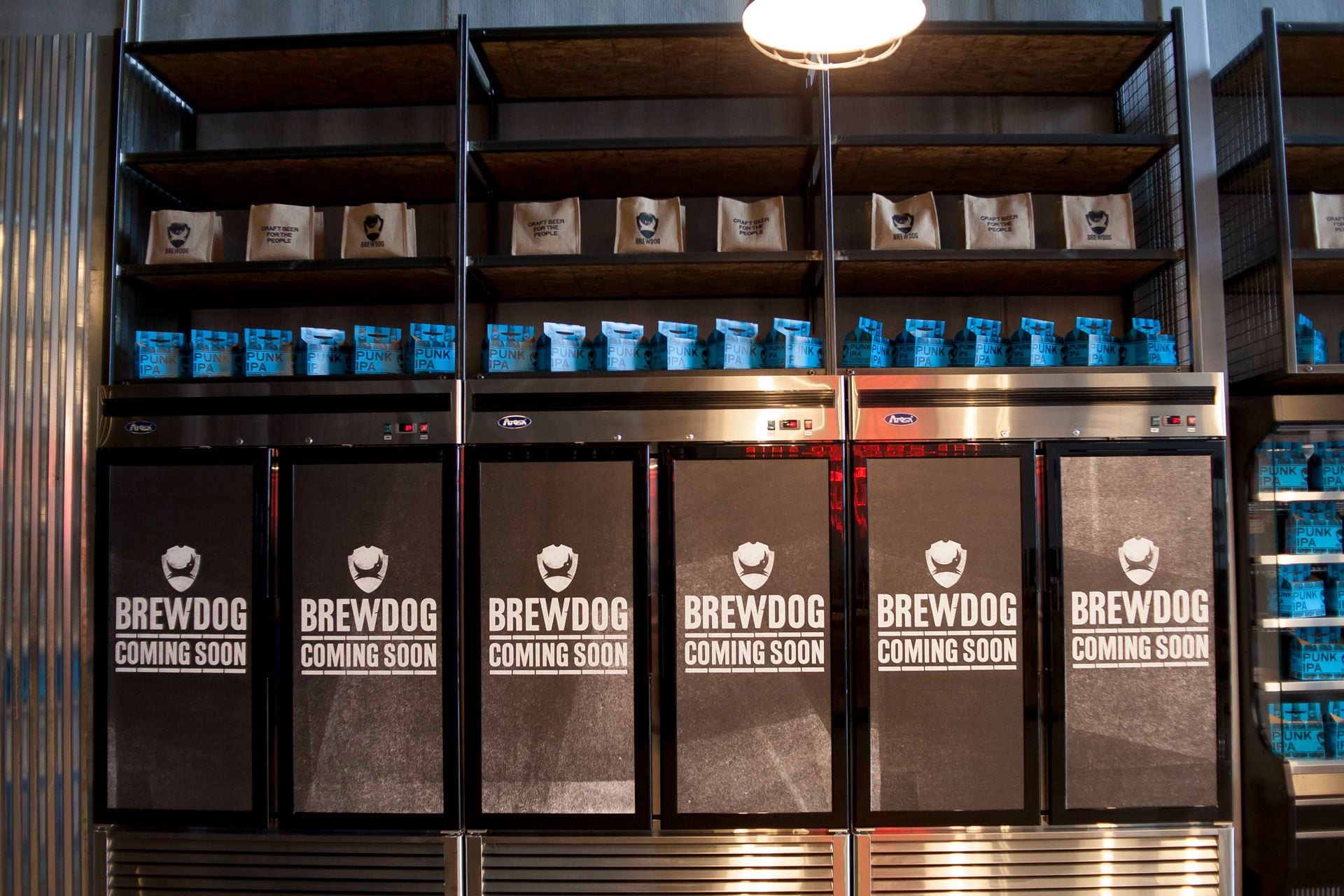 In just a few weeks, the first beers will become available to the public out of the USA Brewery. The number one on everyone’s to-try list? Punk IPA.

“Punk IPA is our flagship beer. And I think they way it’s been received here has been amazing, said Alexander. “Because in comparison to some of the IPA’s you guys have got, it’s pretty low abv. But it’s very drinkable, it’s very easy going.”

Borsvold agreed. Not only was it his favorite to drink, he’s enjoying making it as well.

“I’ve been enjoining making Punk so much. We’re going through a lot of steps with flavor matching and trying to get it dialed in so it’s exactly right,” said Borsvold. 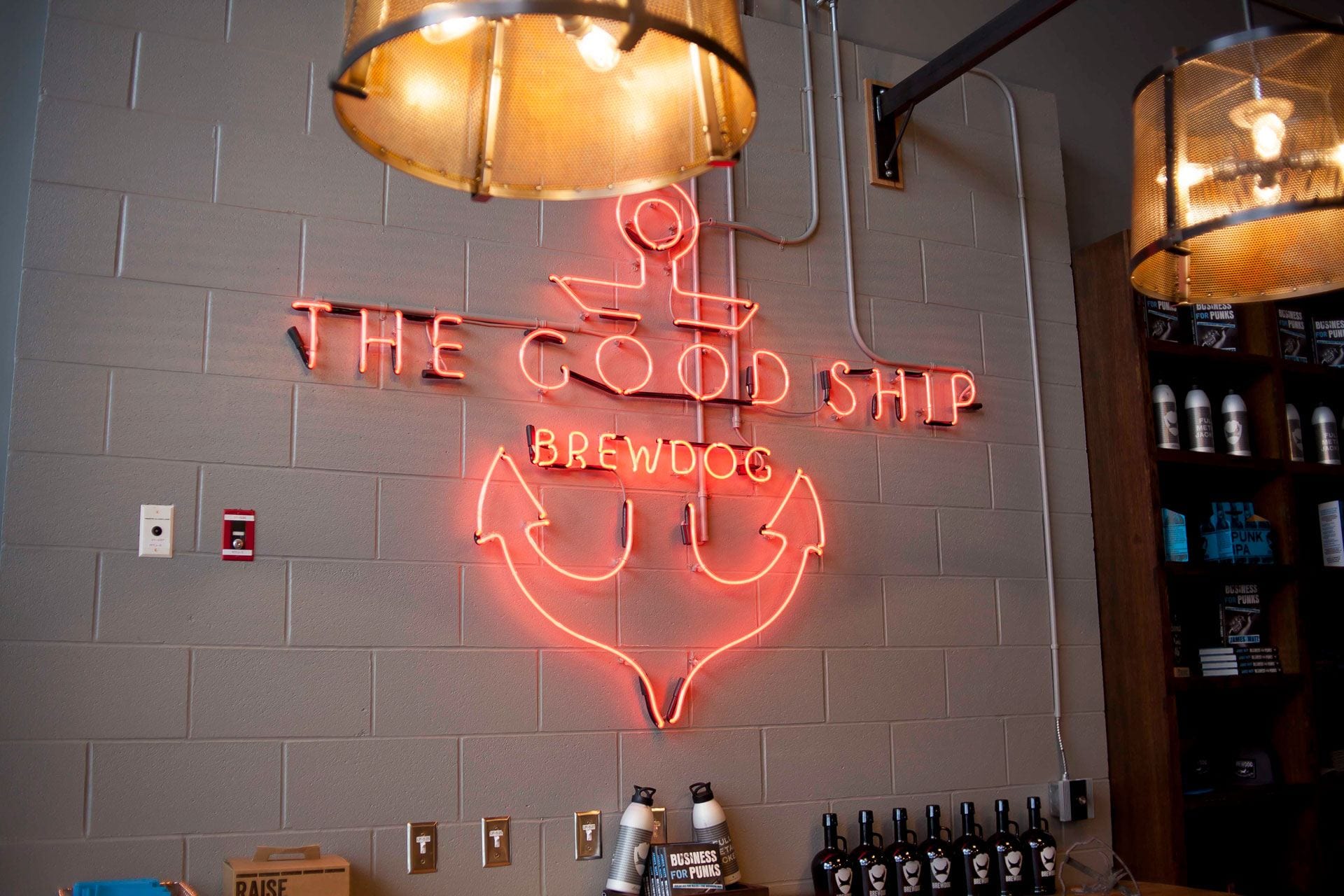 BrewDog’s growth is imminent. A recent crowdfunding campaign raised money to build The Doghouse, a hotel which will sit near the brewery in Canal Winchester. They’re also opening two additional tap rooms, one in the Short North and one in Franklinton, which will hopefully be open in late summer/early fall.

But Stewart knows that they couldn’t have come this far on their own.

“We wouldn’t be able to do any of this if it wasn’t for our equity punk community. We’ve got 55,000 world-wide now,” he explained.

“They’ve helped us get to where we are and they continue to show us so much support. We’re eternally grateful for their love of what we do. Without them, we would be nothing.”

For more information about BrewDog, you can visit their website here.