The Best Breweries In Columbus

Columbus has always had a serious brewery culture.

The problem in this town isn’t finding a good beer, it’s deciding on where to go. Personally, my recommendation would be all of the breweries. But for the sake of time (and my liver), I’ve decided to utilize some other resources to make this decision.

Since our lives are completely intertwined with technology, it should come as no surprise that when I asked a co-worker for a great way to rank breweries, she said, “There’s an app for that”.

Untappd is a great way to hear from other local beer-lovers about their favorite breweries and drinks. These breweries offer some truly amazing beers, and we’ve decided to include Untappd’s Top 5 beer recommendations with each brewery so that you’ll know exactly what to order if it’s your first visit.

The Elevator Brewery & Draught Haus is a micro brewery located in the Columbia building, a gorgeous historic building in downtown Clumbus. The building dates back to 1897, but Elevator Brewery hasn’t been there quite that long.

Elevator may be known for the delicious beer they’ve been brewing onsite for the last two decades, but they’ve also got an incredible food menu, as well as house made draft cocktails and sodas.

It’s not hard to convince me to tag along to any brewery, but when someone tells you that this particular one has a bunch of stained glass windows inspired by Dungeons and Dragons, well let’s just say it would literally be impossible to keep me out.

Over the years, craft beer has too often become synonymous with a hoppy beer. But sometimes, the day calls for a simple lager with your pals. Gemüt’s German-style beer lineup is the perfect place to go on that kind of day. In addition to the amazing beer and atmosphere, they also have the most incredible schnitzel. Talk about having your kuchen and eating it too.

If you’ve never been to the city’s one and only “brewstillery” then you are in for a treat. Offering a wide variety of beer styles and select clear and wood aged spirits, Endeavor Brewing & Spirits is a one-stop shop.

Hit up the tap room to enjoy fresh beer on tap, seasonal craft cocktails, and artisan snacks from local vendors.

Parsons North Brewing is one of those magical breweries that just ticks every single box. Looking for good vibes? They’ve got em’. Thoughtfully crafted brews? You know it! Incredible cocktails for your friend who refuses to try delicious beer? YUP.

Seriously, the brewery has it all, from traditional brews to beers that push you out of your comfort zone. They also frequently host a Pups on the Patio event, so that’s the adorable cherry on top of this sundae.

When North High Brewing first burst onto the scene back in 2012, they operated solely out of their space in the Short North. Now, the brewery has expanded to several brewpups around Ohio and their brewing facility on Cleveland Ave.

In the tap room in the Short North there are roughly 2 dozen North High beers on tap. Order one or two of those, grab some delicious grub off the menu, and you’ll have one heck of a night.

Land-Grant’s massive brewery space in Franklinton used to build elevators and track-systems for newspaper production facilities, now it crafts some of the best beer in the city. The brewery got a jump start on others in Columbus by canning their own beer and after nearly ten years in the space, the experts at Land-Grant have it down to an art. Plus, they have the best beer garden in the city.

One of my favorite things about Land-Grant (besides how happy a Stiff-Arm IPA makes my husband) is that they offer brewery tours. I love seeing how things work and how they are made. Free tours of the brewery our available on Saturdays at 3pm. You don’t need to reserve tickets, just pop into the tap room around 2:45 on Saturdays.

Sideswipe Brewing was named after a martial arts move that’s unexpected, knocking your opponet off your feet. That’s also, metophorically, what the brewery hopes the beer wil do as well. In addition to having a huge variety of beer on tap, you can also order seltzers, ciders, cocktails and wine.

The vibes at Sideswipe are very laid back. They don’t have a kitchen in-house, but there are frequently food trucks on-site, plus you can bring in your own food or order pizza from menus provided by the brewery that will deliver straight to your table in the tap room.

So just before anyone decides to point it out, I am fully aware that Rockmill Brewery isn’t technically in Columbus. But the truth is that it’s just too good not to include on this list, and Lancaster isn’t that far away anyway! Especially when the reward for the journey is enjoying a delightful brew in a beautiful, rural setting.

The kitchen is currently closed, but you can bring your own picnic to enjoy while you sip on your bevs. In a way, it’s kind of perfect because you can bring the perfect charcuterie to pair with one of Rockmill’s cold brews.

Seventh Son has been serving up amazing craft beer in Italian Village for nearly a decade. It’s always my go to suggestion when someone is unsure of whether or not they like craft beer because you can count on Seventh Son to turn them into a believer.

They serve a variety of beers, from hoppy to malty, and thats especially true once you visit one of their sister breweries, Getaway Brewing and Antiques on High. 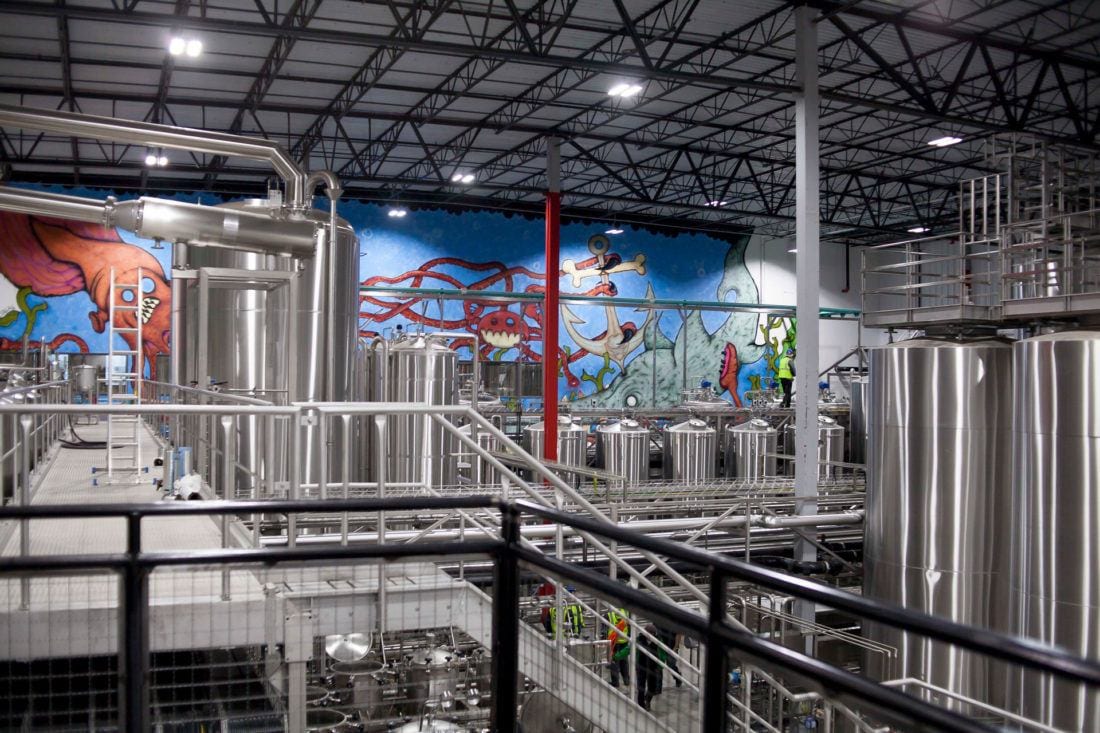 A visit to BrewDog’s massive brewing facility in Canal Winchester feels more like stepping into a beer theme park than a brewery. While you’re sipping on some of this Scottish-born brewery’s most famous beers, you can grab a bite to eat, play some games, or enjoy the sunshine in the massive outdoor area.

Additionally, there’s a hotel and beer museum on site, so you can even make turn your visit into a mini beer-themed vacation.

You can pop up to the taproom in Worthington or stop by the brewpub in Italian Village. The taproom doesn’t have a kitchen, but there are regular food trucks on-site, or you can bring your own grub!

Wolf’s Ridge, like many breweries, is a project full of passion and love. This family-owned joint has been knocking it out of the park ever since it opened back in 2013.

The beer is excellent and they’ve got the awards to prove it. But Wolf’s Ridge isn’t just about quality craft beer. It’s about combining the experience of craft brewing and exceptional dining. It’s the perfect date night or special occasion brewery restaurant where you can eat the best food and drink the best beer, all in the same place.

Without Columbus Brewing Company, I shudder to think what the craft beer scene would be here in Columbus. They are the oldest craft brewery here in the city, even though it pains me to use that moniker since CBC and I were both born in the glorious year of 1988.

A lot has changed since then. Columbus Brewing Company was at the forefront of bringing IPAs to this city, and it’s hard to imagine what it would be like here now if Bodhi hadn’t taken this city by storm.

Pretentious Barrel House opened back in 2017 and they really brought the sour ale movement to Columbus. The first time I visited, I was completely convinced that I had absolutely no interest in trying a sour beer. Boy, oh boy, was I in for a rude awakening.

I fully admit that sour ales aren’t for everyone, but if you are only going to try one, I highly suggest that you put yourself in the very capable hands of the folks at Pretentious Barrel House. Plus, they have skeeball. What’s not to love?

The Marengo-based craft brewer Hoof Hearted has been serving up their unique beer in Italian Village since 2016. It wasn’t exactly a tough sell back in the day to get me to give this place a try. They had me at “swim up bar”. But what’s kept me coming back all these years is the fact that they make incredible beer.

The brewery doesn’t take itself too seriously, and that’s part of the charm. It’s a fun atmosphere, full of color and quirks, serving yummy food, and on top of all of that, the beer is phenomenal.