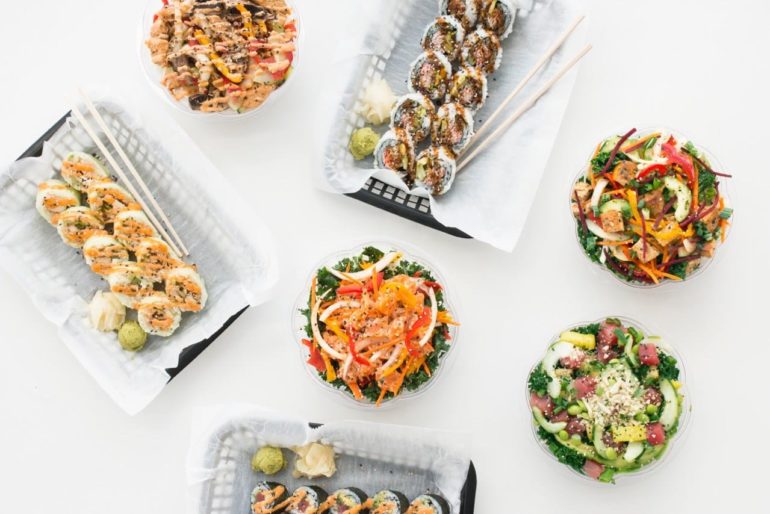 When you think about eating amazing sushi, you probably imagine yourself sitting in a massive metropolitan city or on a sunny patio soaking up the ocean breeze. I know I certainly didn’t imagine that I’d find it on a Thursday morning on W 5th Avenue. As I made my way into FUSIAN in Grandview, I was immediately impressed by the clean, modern design. It was light and airy and inviting. Which is, coincidentally, a perfect representation of this Asian inspired restaurant.

Even though it was about an hour until open, the staff was hard at work, prepping food and stocking the front of house. I was greeted by a kind person with amazing multi-colored hair who graciously pointed me in the direction of water while I waited on co-founder Zach Weprin to arrive. As I prepared my notes for this interview, I found myself observing the staff. They were laughing and talking as they worked, and I was reminded of one my favorite jobs in the service industry. You can tell when people enjoy where they work because they’re truly happy there, and that happiness becomes contagious.

As I looked around outside, I saw a young man talking on his phone. Sporting a  backward baseball cap and a graphic tee, I watched him as he made his way into the restaurant and towards my table. I knew that the founders were young, but it’s different to see someone barely older than myself standing in a house that they built. As I talked with Zach, I learned just as much about his business model as I did about who he is as a person. And if there is one thing I took away, it’s that Columbus wasn’t an arbitrary business move. FUSIAN was here for a reason.

“I started this company with my brother and my best friend from growing up, Steve, my brother’s name is Josh Weprin, and Stephan Harman,” Zach began to explain. “My dad was an entrepreneur his whole life. He was in the auto parts business for 30 years.” Before he spoke another word, I realized that family is a huge part of this business, especially for Zach. In 2010, he alongside Stephan and Josh decided that there was something missing from the Ohio eating experience. They had a vision, and that was to bring a unique dining experience that could not only satisfy consumers but educate them.

“It really started with an idea to create this experience that we wanted that we couldn’t find. And that was the whole vision from the very beginning, and it continues to be the same thing today,” said Weprin. “We’re continually trying to evolve and innovate the concept in order to appeal to our customer. So it’s a very entrepreneurial mindset, not necessarily like ‘I went to culinary school and developed a restaurant because of that’, it’s more, let’s create this concept that we would want ourselves, that we believe everybody else would want too. And that’s how we started, and that’s what we continue to do.” Since launching out of Cincinnati in 2010, FUSIAN has expanded to 11 locations, with two more to open in Ohio soon. And they may have taken the entire Buckeye state by storm, but they knew there was only one place in the state they wanted to call home.

“Columbus has been home to me for a long time,” explained Weprin.  I was born in Dayton, but I went to college here. I lived here for a little while after college and I’ve been living here for 5 years now. So I’ve spent most of my life actually in Columbus, and I have a lot of family here, most of my family lives here, as opposed to Dayton.” But choosing Columbus was about more than just his family ties. “Columbus is the gateway to America. You know, I think there’s a fact or something that you can get to a significant portion of the population within a 10-hour drive of this city. You can get to New York rather quickly, you can get to Chicago rather quickly. It’s also the epicenter of Ohio. We’re building community in every major market in Ohio and we needed to pick a home and I knew this city the best, so, you know the community really gathers around us here and it’s a great place to grow a business.”

And he’s not wrong. The community in Columbus is a unique thing. Whenever I try to describe this city to those visiting for the first time, I always say, It’s a college town, but it’s a big city. There is no one mold that Columbus can fit into. It’s the kind of place where you can meet 100 new people in a day but still run into your old college buddies at night. It’s a place where people know your name, and if they don’t know it, they’re happy to learn it. Columbus is the kind of place where any dream goes. People in our communities genuinely want others to succeed, but we’re still quick to voice our opinions. That what makes it one of the most popular test markets for major retailers around the world.

The team at FUSIAN is planning to take every suggestion the capital city has to offer. “We designated this location, the FUSIAN Grandview location as our test kitchen, where we’ll innovate, work on new menu items and improve what we’ve already created and practice new stuff to see if it works and then ultimately roll it out across all the stores.” It’s good for us, and that’s exactly what they’re doing. FUSIAN recently launched their newest item, the inspired bowl. “We made a pretty significant pivot in the last month with adding the inspired bowls to our menu, which were an immediate success overnight,” said Weprin. “So right now, this is the only location in Columbus that has the bowls. We actually just opened in Toledo last week and they have them now too, but they were so successful and they’re a huge part of where our future is going, that we’re working on retrofitting all of our existing stores to add the bowls. So we’ll have bowls in Clintonville (April 1) and Easton (June 1).”

“We’re very adamant about the culture we’re developing in our organization. And really creating a culture that’s adapting and willing-accepting change. Change is huge. And it allows you to evolve personally and professionally. That’s what we preach each and every day. Because when you can create a culture of understanding and accepting change, and taking it on as an exciting new adventure, you can really almost create anything you dream of.”

This particular adventure just led FUSIAN to open a new store in Toledo, and preparing for the opening of FUSIAN in Beavercreek. 2018 will bring two new stores to Cleveland. Of course, Columbus will always be home for this sushi sensation, but that doesn’t mean the guys don’t plan on following their dreams. Like most Buckeye alums, Zach, Josh, and Stephan plan on expanding their business outside of our state. “Our dreams are huge,” Weprin said with a smile. “ We’ve been patient to get to this point so far, even though we have 11 locations. We feel like we’re just getting started. We’re young and we’re very excited to keep growing. We’re excited to prove out the economic model in bigger markets. The goal is kind of to build this foundation in Ohio that we can build off of and take risks in larger markets.”

“If 7 years ago you would have said that we’d be developing this Asian inspired experience, I would have laughed at you. But honestly, it’s the most fun and exciting way to live and work. It’s an amazing opportunity and we’re super humbled that it’s working. One of the reasons we love Columbus is that it allows us to make mistakes. No, not make mistakes, I take that back,” Weprin hesitated. “We want critical feedback. We want to continue to evolve our concept and get better. And the best way to do that is by figuring out what we’re doing right and more importantly figure out what we’re doing wrong so we can continue to improve that. I think that as we build connections and relationships in our communities, we build such a close relationship where we can learn from each and everything we do, so we can keep improving. And that’s something that we strive for every day.”

While he was speaking, I found myself nodding along in agreeance. Columbus is such an amazing city. It’s picked me back up and stood me proudly on my feet more times than I’d care to admit. And that’s because it’s a place that genuinely cares about its citizens. We have strong, thriving communities that support each other, whether we’re in need and experiencing life-altering success. Usually a combination of both.

FUSIAN has so many different options for people to try. Sushi can seem scary to people, but if we allow the excitement of a new adventure to take hold, we enrich our lives. And that’s what food is all about. It should not only nourish our bodies but our souls. So get out there Columbus. Take a step out of your comfort zone, head to your nearest FUSIAN, and allow yourself to be delightfully surprised by the change.