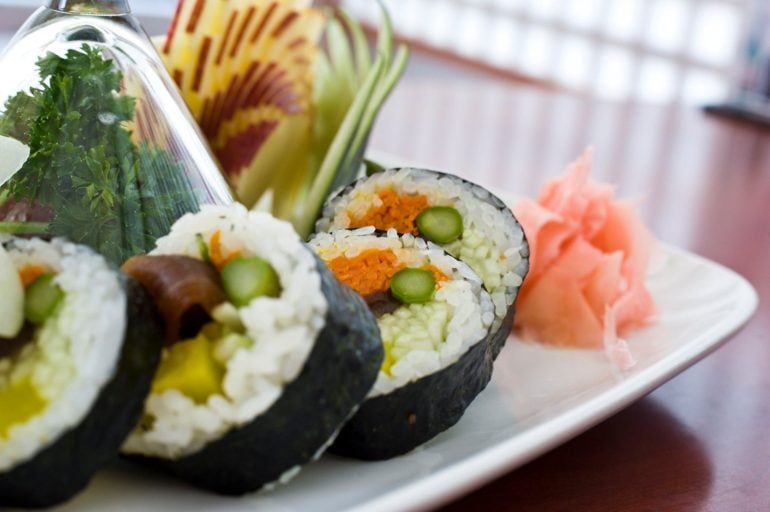 When it comes to sushi eating in the Capital City, these restaurants and diners are the very cream of the crop.

Here’s the thing about sushi, Columbus: It’s better than you. It’s better than all of us. It’s probably one of the greatest foods ever invented, rivaling only the taco in sheer amazingness. Sushi is practically the Evander Holyfield to taco’s Mike Tyson, the Biggie to taco’s Tupac, the Nicola Tesla to its Edison. But you don’t see sushi causing such a big fuss about how awesome it is, it’s comfortable in its own seaweed skin enough to not be boastful.

But that’s where I come in, rocking the mic as sushi’s hype-man, getting the crowd all jacked for its dramatic entrance into the ring. Sushi deserves our love and admiration, that’s why I put together this handy list of the best places to get a roll or two in the city. So get the soy and wasabi ready Columbus, we’re about to run a tour de force of this city’s best sushi spots.

So you got that sushi craving but you don’t have a lot of time on your hands? No problem, if you’re near Old Henderson Road Sushi, Ten can have you in and out in no time. Not only do they have some fairly good rolls that can be made quickly, but their Poke Bowls are out of this world. With Sushi Ten you’re going to get some delicious food at a very reasonable price.
Where:  1159 Old Henderson Rd, Columbus, OH 43220

Perfect for a date or a dinner out with long time friends, Sushi En offers a comfortable yet intimate dining experience. All of their rolls are expertly made by a knowledgeable, family run staff. If you really want to go all out try their sushi boats. It’s literally a “boat load” of fish displayed on a pretty cool wooden boat design.
Where:  1051 Gemini Pl, Columbus, OH 43240

Sushi Ko is one of those restaurants that has just been around since forever. They have over 15 years experience, displaying some pretty awesome plating presentations for their courses. They offer 100 different options when it comes to sushi and sashimi so come prepared to make some decisions.
Where:  122 Hutchinson Ave, Columbus, OH 43235

Located next to the North Market, Kooma does a more modern take on the sushi experience, a trait that’s apparent from the moment you step in. The look and feel of the place is contemporary and chic, especially in their plating and even in the dishes themselves. If you’re looking for something different or a non-traditional take on Japanese cuisine, Kooma is definitely the way to go.
Where: 37 Vine St, Columbus, OH 43215

Sapporo is the sushi spot for those craving that old world, family diner feel in your sushi eating experience. All of their rolls are very unique, offering a variety of traditional rolls, sashimi, and other more exotic combinations. If you’re able to make it up for lunch they offer a great bento box special that comes with soup, salad, a spring roll, fried rice, and a roll of sushi, all for around $10. An amazing deal for anyone, no matter how hungry you are.
Where:  732 N State St, Westerville, OH 43082

Lemon Grass borrows heavily from several different Asian cuisines to create a special and distinct twist on a lot of old favorites. Not only do they have some of the best sushi in the city, but they’re also known for their pad thai, linguine, and tofu dishes. Make sure you check out their date night specials which include 40% off of half and whole bottles of wine.
Where:  641 N High St, Columbus, OH 43215

Another multi-Asian fusion restaurant, Royal Ginger is known for their fresh, house made sauces. Their sushi rolls stay pretty out of the box too with some bizarre and unique names. Whether it’s the Mars roll, the Halloween roll, or the Double Crunch, you’re definitely sure to find something you’ve never had before.
Where: 8591 Sancus Blvd, Columbus, OH 43240

Tora has a massive menu that doesn’t just begin or end with sushi. Sure, their sushi is some of the best in the city, with traditionally made rolls sure to satisfy any purist. But they also offer a variety of soups, pasta, steaks, and desserts. Trust me, go here for dinner and you’ll be bragging about it for days to come.
Where:  1330 N Hamilton Rd, Columbus, OH 43230

Quite possibly the most acclaimed Japanese sushi restaurant in the city, no list of the best sushi in Columbus could be complete without them. They take all of their dishes seriously, even going so far as to import some fish directly from Japan. Long lauded as the best Japanese cuisine in Columbus, the only way you’d get more authentic sushi is by traveling to a coastal city or Japan itself. Everything from the ambiance, to the service, and the very food itself, exudes an exquisite taste and an appreciation for doing things simply and well.
Where:  1173 Old Henderson Rd, Columbus, OH 43220