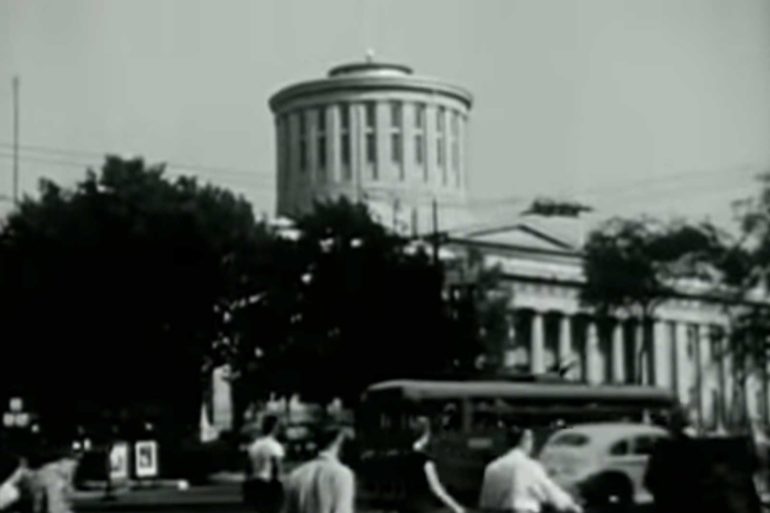 As human beings, we have a tendency to view the past in the best light possible.

I’m not an expert, so I can’t tell you exactly why we do this, but I can speak to the feeling of nostalgia. I tend to find myself yearning for simpler times and when history gets boiled down, we tend to tell the inspiring stories, the ones that paint the prettiest pictures of the past.

All that being said, we all know that it wasn’t always sunshine and roses for everyone in days gone bye. Whenever I come across old videos depicting everyday life in Columbus, I always view them with a degree of skepticism. But this video in particular is so painfully upbeat that I can’t help but admire their commitment to the narrative.

Columbus is the first city featured in the video. It will come as a shock to absolutely no one that most of the time dedicated to Columbus revolves around the Ohio State University. Even in the 1950s, fans would pack the stadium on weekends to cheer on the Buckeyes. While a lot of things have changed in the last 70 years, this city’s love of football has not.

Throughout the video, each major city in Ohio is whittled down to its main manufacturing industries. In Cleveland and Youngstown, it’s steel. The video shows rows of smokestacks and molten hot steel, all accompanied by cheerful music that makes it seem less like a physically demanding job and more like a fun day for the old gang down at the mill. In Toledo, glassblowing takes center stage. Some cities mentioned are highlighted more for their famous residents, like the homes of Ohio’s presidents, inventors, and daredevils.

While it’s nice to reminisce, it’s hard to swallow some of the beauty the narrator is selling. At one point, he describes pollution from steel mills as “soaring stacks make a smoking majesty of the sky. Such is beautiful Ohio!”

The narrator calls Columbus “proudly progressive” which we can take as a compliment, however, the video features virtually no people of color and casually brands Ohio as formerly the “happy Indian’s hunting ground.”

The contrast between the older video and modern “tour of Ohio” style videos is immediately evident. Instead of focusing on the industrial aspects of the state, modern videos tend to highlight arts, sports, and diversity, showcasing the many museums, arenas, and restaurants instead.

It’s so interesting to dream about what the videos of Ohio will look like in another 70 years. I can only hope they continue to showcase and celebrate our state’s diversity and ingenuity. And also that at least part of the retrospective includes the Hyperloop. I haven’t given up on that dream yet, Columbus.