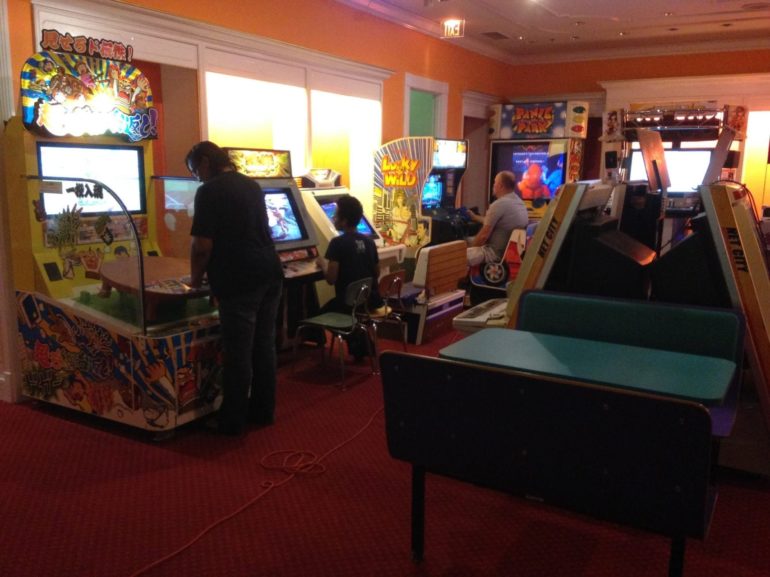 Eastland is one of the last standing malls from the bygone 90s. It also happens to be home to Akiba Arcade, the largest Japanese arcade and Anime store in Ohio.

Now I know what you’re thinking, there’s no way Eastland Mall is still open. And even if it does still exist by some capitalist consumer market miracle, there’s no way that some Akihabara nerd paradise can possibly exist inside a mall known for killing off the last remaining Sears in the city.

I know Columbus, I too was hesitant when I heard rumor of the geeky subculture urban legend of Akiba Arcade. Even when I did a quick search online, I was still skeptical. I kept thinking I would show up to find an abandoned mall patrolled by a marauding gang of 13-year olds in tribal war paint and JNCO jeans, living out some nightmarish, Mad Max-like alternate reality. In which case I would have been writing a much different (and arguably more awesome) store front article.

I had to see it for myself, if for no other reason than to sate my own morbid curiosity which, I must admit, was completely and thoroughly piqued.

The mall itself was just as beige and drab as I remembered it. The last time I had set foot in Eastland I was just a wee one, shopping for shoes or school supplies or something else just as forgettable. I couldn’t quite remember exactly what it was and for some reason, that seemed like a great shame to me. But either way, I was here now, ready to confront the despair of a once glorious mall now turned into a hollow husk of its former self.

I braced myself as I opened the mall’s entrance, not sure exactly what to expect.

There could be mounds of cobwebs and disregarded relics of the ’90s, all abandoned in this lost and forgotten shrine to commercialism and— Oh my god there were actual people there. And not just a few of them either, but kind of a lot. All shopping nonchalantly, some even wandering aimlessly in and out of shops and store fronts. Kitschy mall music rattled through old mall speakers, metal railings and tiled floors gleamed just like I remembered it from more than a decade and a half ago.

How the hell was this mall even still a thing? I mean, I wouldn’t exactly say it was flourishing but it was far from abandoned.

It was even decently maintained to my utter disappointment. Still, just because it had a few shops up and going, it didn’t mean that this nerdy-weeaboo arcade was actually here or that it even existed, and so my search continued.

I ventured down hallways and shops, searching hidden corner after hidden corner of the forgotten mall’s stores and retail shops. At one point I actually began to lose hope, feeling a bit disappointed I was unable to find the arcade until, on the very last corner toward the end of the mall, I found it. Tucked away so carefully that you’d have to walk toward the very end of the hallway before turning a corner to see it. Akiba Arcade lit up like a beacon, welcoming weary travelers and mall explorers to come rest by its neon ambiance.

Entering the arcade I was greeted by a wiry but friendly fellow who was just as excited to talk to someone (anyone) about his nerd passions as he was about ushering in new customers.

Entrance to the arcade required you pay for a block of play time but the friendly game host offered to show me the ins-and-outs for free before making up my mind. To the left was an entire section dedicated to toys, figurines, and models. It was all bubble gum colored with smiling poised Japanese figures, all stacked and organized with obsessive care.

The arcade itself was actually bigger than I expected, with large areas lit up by pulsating lights and happy-go pop music blaring from each cabinet.

There was even a sectioned off area near the back that looked like the private rooms found in Asian karaoke clubs. It was only once you went back for a closer look that you realized they were rooms designated for gaming consoles, housing everything from Playstations to more obscure retro style systems. I had stumbled into the epicenter of a bizarre nerdy subculture like the proverbial Alice in Wonderland and I was loving every minute of its eccentric charm.

I finally decided to cough up the cash to play some games which, for a full hour or so of unlimited pay, wasn’t bad for five bucks.

None of the games were even remotely translated to English so I had to rely on the shop host or a friendly fellow patron to help me out with learning the games. There were quite a bit of other players about, mostly teenagers to younger adults off in their own world, happily playing their games. Most seemed like regulars, or comfortable enough with the arcades not to stand out too much.

One of my favorites was a game in which you literally flip over a table in socially inappropriate scenarios (i.e. at dinner, a wedding, work) with the intent and purpose of causing as much of a scene as humanly possible. It was weird, it was disturbing, it was— oddly therapeutic.

There were tons of other ridiculous gaming concepts, one in which you bang in rhythm on large tom-tom drums to a combination of Japanese folk songs and sugary synthetic pop music. There was even a SWAT shooter in which you could dress your character in an adorable panda costume while killing terrorists with an AR-15. In retrospect, it was probably a bit disturbing, but at the time I couldn’t stop laughing long enough to even consider it.

I noticed an intrinsic difference in these Japanese games as opposed to their more western counterparts.

Western games were always based in some form of realism or another.

They had characters compelled by story or occupation with a simple play to win formula that they carried out to a fault. Japanese games, however, just never gave a damn. They followed a more willy nilly format, which allowed for more out of the box concepts and original styles of play. But more than that they were just fun. Simple, approachable despite the language barrier, definitely bizarre, but genuinely fun.

I wrapped up my time at the arcade and even decided on purchasing a figurine as a souvenir. I felt like some sort of urban Magellan, who had explored the ancient ruins of a forgotten mall undaunted, rewarded with a story to tell and, quite possibly, an exaggerated sense of accomplishment. I highly recommend anyone with an adventurous soul or nerdy inclination to check this place out, trust me, you’ll be grinning from ear to ear the entire time. And now, here’s a picture of Lil’ Yachty at Eastland Mall, because I definitely randomly found it and apparently it’s a thing.

No, but seriously, how is this an actual thing?

For more information on Akiba Arcade at Eastland Mall, check out their Facebook page right here.