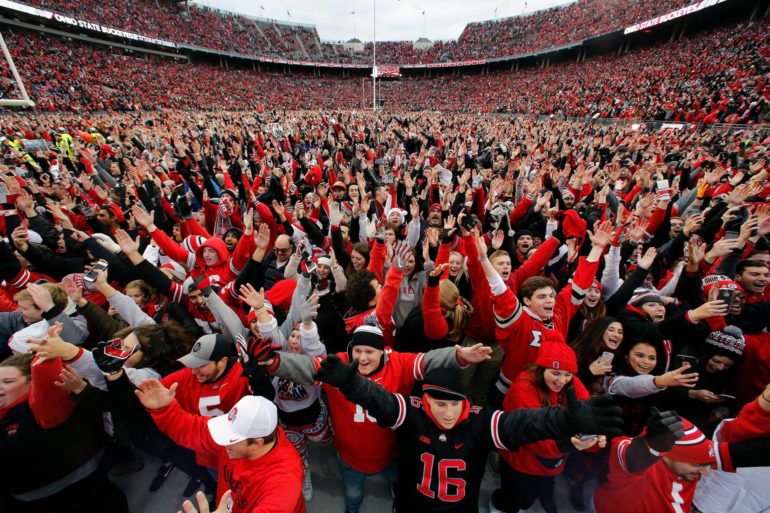 via Ohio State University Football Facebook
Things to Do

Before we know it, our Saturdays will be filled with chants of “O-H-I-O” and rousing choruses of songs disparaging that team up north. Buckeye fans pour in from all over on home game weekends, and sometimes the prospect of heading down to campus on a Saturday can seem a little daunting.

But there’s nothing quite like the atmosphere on campus when the scarlet and grey are playing. There’s a lot of cool things to see and tons of fun traditions fans can take part in. If you’re trying to figure out how to spend the perfect Saturday showing off your love of the Buckeyes, we’ve got your back. Here are 9 Must-Do Activities for Buckeye Fans on Game Day.

Take In A Skull Session

The OSU Marching Band Skull Session starts two hours before kickoff of every home football game. The tradition began all the way back in 1957. The Skull Session is basically the biggest, most exciting pep rally you’ll ever go to. It’s free to attend, so even if you don’t have tickets to the game, you can still get your fan on. The session is held at St. John Arena and seating is first-come, first-serve.

Grab a pre or post-game drink at Varsity Club

🅾️-H-❕-🅾️ The Bucks are good but these friends are better ❤️

Varsity Club (one of our 50 Best Bars In Columbus) is the place to grab a pre-game beer. During noon games, they’re open and ready for you by 8 a.m. There are a few rules when stopping into the Varsity Club, so listen up. The bar hosts an epic tailgating bash and it’s cash only and only for guests 21+. You can’t take backpacks or coolers in and bags (except for small women’s clutch-style handbags) are prohibited. There’s no parking on-site, so be sure to plan your transportation accordingly.

Take A Selfie with Woody Hayes

Woody Hayes may be gone, but he’s a legend, which means he’ll never be forgotten. You can snap a pic with the statue of this iconic OSU coach right outside of Varsity Club, near Lane Ave. and N High St. If you find yourself near the Woody Hayes Athletic Center, there’s an even larger statue you can pose with! What can I say? Columbus really loves Woody.

Hit up a tailgate

I know we just talked about going to Varsity Club, which is essentially a giant tailgate party, but they’re not the only ones who know how to have a good time. This handy guide to tailgating at Ohio State will point you in all the right directions. Have fun and be responsible.

Go on a tour of The Shoe

Although you can’t take a tour on game day, you can schedule one Monday-Friday, as long as it isn’t a Friday before a home game. If you’ve never had the opportunity to see Ohio Stadium when it’s not overflowing with fans, I highly recommend it. It’s a beautiful place.

This one is just a given. If you don’t start your Saturday with a buckeye donut from Buckeye Donuts, are you even an Ohio State Fan? All jokes aside, the donut will be the perfect sugar rush you need to get through a long day of celebrating.

Buckeye Grove is one of the most overlooked and underrated spots on campus. The tradition of planting buckeye trees at the grove started in 1934. There are over 180 trees in the grove now, each one with a plaque that honors a different Buckeye All-American.

Stop by Mirror Lake (no swimming)

A post shared by The Ohio State University (@theohiostateuniversity) on Oct 16, 2018 at 1:24pm PDT

You can’t take a dip in Mirror Lake anymore, but that doesn’t mean you shouldn’t stop by and check it out. The lake underwent recent renovations and it’s even prettier than ever. Go during peak fall foliage and you will be in Buckeye heaven.

Stick Around To Hear The Victory Bell

I can say with confidence that this bell will be ringing more often than not. The victory bell tolls for 15 minutes after a victory at home, and 30 minutes if the win is against that team up north.