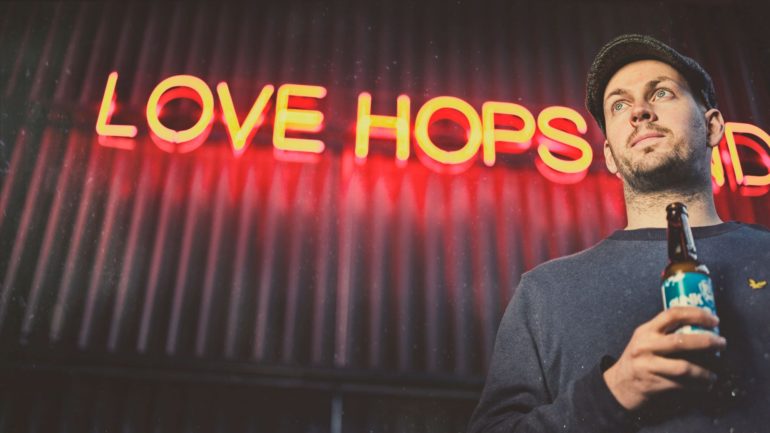 James Watt, Owner Of BrewDog, On The Journey So Far, Their Love Of Columbus, And What Comes Next

For the last 10 years, the guys at BrewDog have been carving out a place for themselves in the world of beer. What started as a two-man operation in mom’s garage has grown into a billion dollar business with countless bars in cities across the globe. From their Brewery in Ellon, Scotland to their brand new distribution hub outside of Columbus, it’s been a spectacular journey so far. I got the chance to chat with co-founder and owner James Watt about his experiences with BrewDog so far, their love of Columbus, and what lies ahead.

BrewDog was started in 2007, in a small town in the Northeast corner of Scotland called Fraserburg. At age 24, James and his friend and co-founder Martin Dickie had decided they were sick of beer they could buy off the shelves. Their solution was to craft better beer themselves. Since that first year, they haven’t slowed down. Constantly expanding, adding new beers, new bars, new locations, and new employees, they have taken everything that was thrown at them and kept moving forward. They’ve now been brewing for 10 years, and once again, as they’ve done before, they’re implementing some exciting changes.

Earlier this month, the company announced that TSG Consumer Partners, a private equity firm, had acquired a 22% stake in BrewDog, officially catapulting their business to the next level. “We’ve come a long way since we poured our first Punk IPA in 2007 but we still have so many ambitions we want to realize. The investment from our friends at TSG will give us the means to accelerate our growth globally,” said James Watt, founder of BrewDog.

Although they already have bars and taprooms scattered across the globe, they want to take their brewing global as well. “We’ll be increasing our capacity at our breweries in Scotland and Columbus, as well as build new breweries in Australia and Asia, all with the aim to make other people as passionate about great craft beer as we are, on a truly global scale. We want to open more awesome bars around the world and also expand our new spirits arm, Lone Wolf,” explained Watt.

Traditionally, BrewDog has promoted a unique program, called Equity for Punks, in order to fund most of their projects. The program allows fans, friends, or just about anyone, to take on varying levels of equity, with investments between $500-$50,000. The different levels come with different perks, but all include a say in how the business is run. The equity system has had huge impacts on BrewDog, but with a larger injection of money, they can do so much more. “The investment from TSG will accelerate our growth plans in the US by helping us to build the world’s first craft beer hotel at our Columbus brewery site and push forward our plans for new breweries in other continents,” said Watt.

But that doesn’t mean that Equity for Punks is over because it was never just about the money anyways. “Our Equity for Punks USA crowdfunding is still open because it’s as much about building an army of craft beer fans as it is about raising capital,” he explained.

For the guys at BrewDog, choosing Columbus was a no brainer. “As soon as we set foot in Columbus we knew it was where BrewDog belonged in America,” said Watt. In the coming months, the brewery here will be the first outside of Scotland. In addition to the brewery, the Canal Winchester campus will have the DogTap, BrewDog’s bar, and eventually, The DogHouse, the first ever craft beer hotel in the world.

“When we decided to run with The DogHouse, it felt right to build it on the same site as our brewery so patrons of the hotel could have tours of our brewing facilities and taste our beers as fresh as possible,” said Watt. The hotel will have tons of amenities for guests, including craft beer minibars, Punk IPA on tap in each room, Beer Spa treatments, a restaurant that focuses on food/beer pairings, craft beer themed meals, and the most anticipated feature of all: the stocked, ensuite shower fridge.

“ The reception from the local community has been incredible – they seem as excited as us to be here. We f*cking love you, Columbus!” -James Watt, Owner of BrewDog

The craft brewing community in Columbus got its start in the late 1980s with Columbus Brewing Company. Over the past 3 decades, Columbus has made a name for itself in the brewing world. It seems that around here, there is always room for one more. “The people of Columbus have been awesome in terms of welcoming us into the community – we honestly feel like it’s our US home,” explained Watt. “ The guys over at North High Brewing Co, Columbus Brewing Co, Seventh Son, Platform and Wolf’s Ridge amongst many many others are all doing some cool stuff. It’s an insanely exciting and burgeoning scene and one we’re super proud to be a part of. We see many, many collaborations on the cards!”

After 10 years of turning your passion into a global brand, the gentlemen at BrewDog do not have any plans of slowing down. “This is the start of something epic in the US. We’ve seen how we’ve exploded in the UK, becoming the country’s largest craft brewer,” said Watt. “We want to mimic that success in the states and continue with the same mission we’ve had from day one: to make people as passionate about craft beer as we are.”