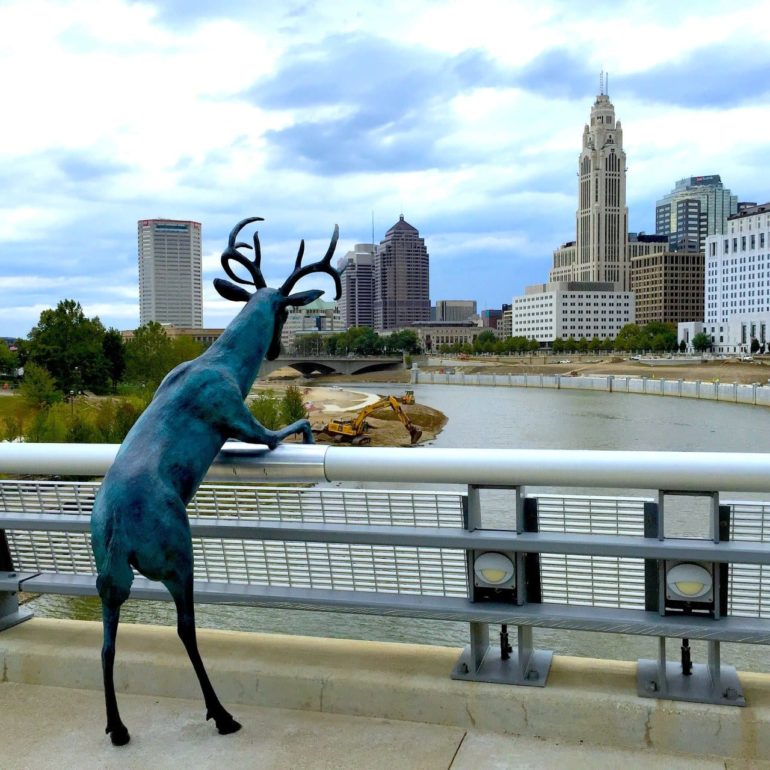 Here’s The Deal With The Scioto Deer

Every true Columbusite has walked along the Scioto Mile and probably seen at least one of the three bronze deer sculptures, but do you know why they’re actually there? It’s okay, neither did I.

These friendly, relaxed looking deer were added to the Scioto Mile as part of the big rehabilitation project in 2015 that turned the area into the incredible multi-use park and trail space it is now.

There are a total of three deer along the Scioto River admiring the river and all the potential it has for greatness, because they were put in during the renovation. Two of these funky art pieces are behind COSI and the other is on the Rich Street Bridge watching over our beloved city. So don’t worry everyone, the deer are protecting us.

The first buck is sitting at the top of the Genoa Park, watching the many bike-riders and dog-walkers go by.

The second is a doe lounging on the grassy hill by the riverfront.

The third deer is over-looking the river on the Rich Street Bridge.

These sculptures are part of a commissioned art installment by artist Terry Allen. He wanted to create something that would be thought provoking and mesh well with the Scioto area.

When Allen learned that “scioto” meant “hairy deer” in a Native American Language, he took that as a bit of inspiration to create the deer. The river was named scioto because of all the deer hair that inevitably ended up in the water when deer actually lived there. Who knew, right?

In an interview with WOSU, Allen said he roamed around the city and ended up at the Scioto mile, “It was supposed to be in this area where people just sort of lounged around and walked around and took it easy and I thought of deer doing the same thing as people just lounging around.”

Allen used forms from a taxidermist to model the deer after but added a few joints in the arms and legs to make them appear slightly more human.

“I did that to make them more accessible,” he told WOSU. “It becomes something that people want to be with and actually touch.”

And just like that the deer became a part of the Scioto Mile we know and love. Have you seen all three? Tell us about it on Facebook or Twitter!

Are you a fan of public art? Check out six other public art installations around Columbus, here!