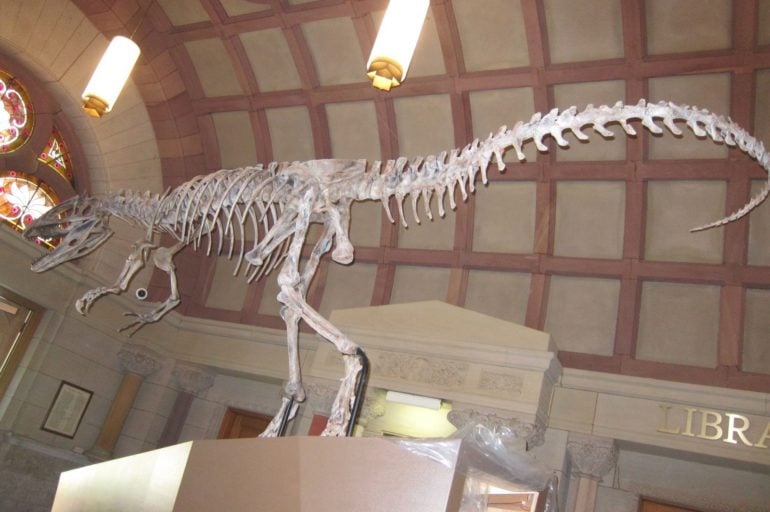 Every kid in Columbus is about to have a new favorite dinosaur, and it’s going to be Cryolophosauraus ellioti.

30 years after the skeleton was first discovered in Antartica by Ohio State Professor David Elliot, the dino is finally coming to OSU. This Cryolophosaurus is the most complete dinosaur skeleton ever found from the Antarctic continent, so it’s pretty amazing that it gets to be displayed right here in Columbus, especially considering this area was not a hotbed of dinosaur activity.

“There are no dinosaurs in Ohio. The rocks are the wrong age,” said Orton Museum Director Bill Ausich. “But this dinosaur was found by one of our faculty members. It’s much more unique than the standard dinosaurs that you’ll see in other Ohio museums.”

The Orton Geological Museum is free to visit and to celebrate the arrival of the dino, they’ll be hosting an open house next weekend. On Sunday, October 7, the museum will be open from 2 p.m. to 4 p.m. and offering a meet-and-greet with David Elliot, Professor Emeritus of Earth Sciences and the man who discovered the Crylophosaurus. Additionally, other dinosaur experts will be on hand to speak to guests and free coloring books and dinosaur cookies will be provided.

Although the museum doesn’t cost visitors to attend, bringing the dinosaur to Orton Hall wasn’t cheap. To bring Cryolophosaurus to Columbus, the team at Orton set up a crowdfunding campaign that raised money from dino-lovers near and far.

While the dinosaur is currently the center of attention at Orton, it’s not the only thing worth seeing at the museum. There’s also a giant sloth skeleton, meteors, other dinosaur bones and teeth, and all kinds of other inspirational science goodies.

You can view the dinosaur in its full glory at Orton Geological Museum, which is open Monday-Friday from 9 a.m. to 5 p.m.