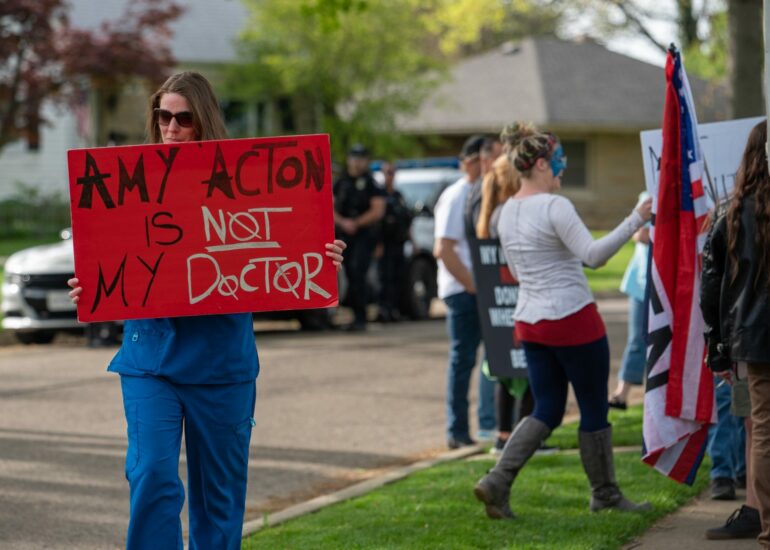 As of Wednesday, there are 132 new sheriffs in town.

When the new coronavirus emerged in Ohio, state law conferred “ultimate authority in matters of quarantine and isolation” to the Ohio Department of Health. It was the ODH director, and the governor who appointed her, who called the shots.

The paradigm shifted Wednesday via the enactment Senate Bill 22, which blocks the health department from issuing any kind of stay-at-home order like those of the early weeks in the pandemic. It also allows the 132 lawmakers in the General Assembly to vote down health orders or emergency declarations without needing the governor’s approval.

The precise implications of the law are tough to pin down — no one knows what the next pandemic will look like or who will control the legislature when it does. Or for that matter, no one knows how this current pandemic will end as a new, faster-spreading and more virulent mutation of the new coronavirus becomes increasingly prevalent.

However, experts said in interviews the new law will tie the hands of health officials when they’re needed most and slow down time-sensitive health decisions at the population level.

“If you’re dealing with an infectious disease, it gets harder and harder to deal with if you don’t deal with it initially,” said Micah Berman, a public health professor at the Ohio State University’s Moritz College of Law.

Early in the COVID-19 pandemic, the national failure to produce a working diagnostic test rendered a “medical diagnosis” all but impossible — most states saved available tests for the elderly, health care workers, and those who had recently travelled to China or been exposed to a known, infected person. The disease itself can spread asymptomatically, making it even harder to detect.

If people who are believed to have been exposed to an infectious disease do not voluntarily choose to isolate themselves, public health officials will have no standing to order them into isolation until they have been medically diagnosed.

“Each day of a lack of response, each hurdle that favors a lack of public health response, will cause infections and death,” said Mark Cameron, an immunologist at Case Western Reserve University.

“The lack of ability to act, in a way that we know at this point will stop the virus, is going to be delayed. Then we’re put more at risk for the types of mandates and lockdowns we’d like to avoid.”

The bill became law after Republicans in the General Assembly overrode the veto of fellow Republican Gov. Mike DeWine — their first veto override since he took office in 2019.

In his veto message, DeWine said SB 22 jeopardizes the safety of every Ohioan and guts the authority of local health departments to move quickly to stave off potential catastrophe.

“SB 22 handcuffs Ohio’s ability to confront crises,” he wrote. “The emergence of a yet unknown, epidemic illnesses bursting on the scene — just as COVID-19 did — remains a very real threat.”

Franklin County imposed a mask mandate in July 2020 before DeWine did so statewide. The county joined a rush of cities and other political subdivisions passing a mask mandate when the governor punted on the decision.

The county health department lifted the mandate in May 2021, in part due to an improving pandemic outlook but also due to the soon-to-take-effect legislation, according to Franklin County Public Health Commissioner Joe Mazzola.

“There are some things now that we’ll have to do a little bit differently, or won’t be able to do at all,” he said. “We’re still evaluating and making sure we’re complying with Senate Bill 22.”

The bill was sponsored by Republican Sens. Rob McColley and Terry Johnson (who is also a physician). They said they wrote the bill to give citizens a seat at the table regarding public health policy.

They said the bill isn’t intended to limit the power of the governor or ODH, merely to correct what they called unconstitutional infringements on citizens’ liberties.

“It is important that we, the legislative branch, are engaged when it comes to making decisions that so powerfully affect the health, safety, welfare and freedom of our constituents,” they said to lawmakers.

Efforts to pass early versions of the bill began as early as May 2020. Some Republican lawmakers began to downplay the pandemic around April 2020, baselessly accusing officials of miscounting the underlying data, and even declaring victory over COVID-19 in June 2020 — all while the coronavirus swam through the state, racking up a death toll that includes more than 20,000 Ohioans to date.

“I think this is an institutional question, a matter of checks and balances,” said House Speaker Bob Cupp, R-Lima, in March 2021 when asked about passing the bill, given the death toll.

“It really doesn’t depend on any specific statistics.”

Policy analysts with the Legislative Service Commission, which conducts research for state lawmakers, warned in an analysis before the bill passed that the provisions allowing the legislature to rescind executive orders and rules by resolutions might be vulnerable to a constitutional challenge.

In short, they determined the state Constitution says law can only be created via bills — which require the governor’s approval or a supermajority of votes. Resolutions only need simple majorities from the House and Senate.

However, these constitutional concerns do not appear in the LSC’s final analysis, published after the bill passed. LSC Executive Director Wendy Zhan declined comment but said there was no change to the underlying bill between the LSC’s second-to-last and final analysis.

DeWine raised the issue of constitutionality in his veto letter as well. A spokesman said Monday there’s no update to be shared whether DeWine plans to mount any legal challenge.

The bill drew strong support from anti-vaccine advocacy groups in Ohio, who switched their focus and messaging efforts during the pandemic to target concepts like lockdowns, masks and other public health measures.

Documents obtained in a public records request show House staff identifying Health Freedom Ohio, one such anti-vaccination group, as a “stakeholder” in support of an earlier, similar version of the legislation.

“It’s very clear that anti-mask, anti-vaccine groups and various proponents supporting them had a very loud megaphone as these bills went through,” Cameron said.

SB 22 has passed, but a new fight wages on with similar battle lines. The House Health Committee held a hearing Tuesday on a bill that would weaken prohibit schools, employers and businesses from requiring vaccinations, and require schools to amplify pre-existing exemptions to school immunization requirements.

Berman warned of a dangerous interplay between the policies.

“You are creating the ideal conditions for the next infectious disease outbreak,” he said. “You’re making it more likely that these local pockets of disease will arrive, then tie the hands of the local health departments who will try to address it when it does.”