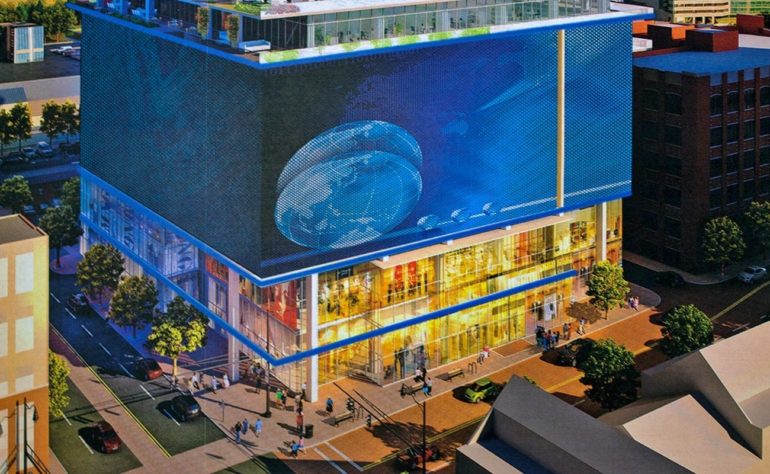 The newest version of the tower now includes a three-floor hotel in the mixed-use building. The hotel joins eight floors of apartments, three floors of condos, six floors of parking, five floors of offices and two floors of retail. I almost forgot to mention the amenity deck. There aren’t an excess of details at this point, but an amenity deck on top of a 28 story building doesn’t need much more information to convince me that we need it.

Although the new building was initially well received by Downtown Commissioners, the video wrap-around screen is causing concern for some. The screen is planned to wrap around parking on floors 3 through 8 of the building, and commissioners are worried that it could be disruptive for those living in the neighborhood.

The tower is still very much at the planning stage, and according to a report by the Columbus Dispatch, commissioners still have concerns about the size of the building.

“Young professionals are actively seeking ‘live-work-play’ environments and these creative-minded professionals are gravitating towards urban, walkable environments that are active and transit-friendly, with open and collaborative work spaces and residences in close proximity to great parks and restaurants,” said Arshot principal Bill Schottenstein in a press release last year, when the project was first announced.

“Millennial Tower will be the first building in Downtown Columbus to fully embrace and integrate these concepts, and it will be a bold and visually stunning addition to the Columbus Skyline.”

The tower will be the tallest building built in Columbus since 1990. But at 330 feet, it will still be significantly shorter than some of the skyline’s other notable buildings.

Once approved, Schottenstein estimates that the tower will take 18 months to complete. For now, the lot at Rich St. and Front St. will remain empty.