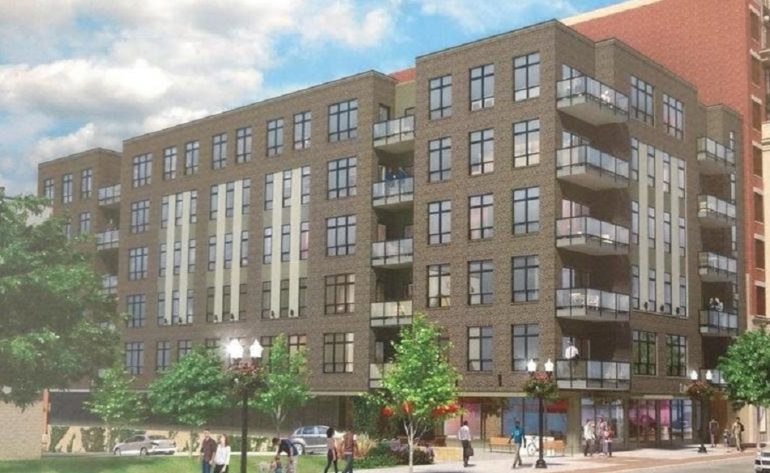 The updated proposal from 2018.
Development

Back in 2016, Crawford-Hoying proposed an 11-story mixed-use project at the Swan Cleaners site Swan Cleaners site at 247-255 S. High Street directly across from the new 250 High building Downtown. A 3-story, 100-year-old building stood in its way, so the developer loaded the proposal with all sorts of positive urban amenities to make it more likely to pass the Downtown Commission.

Not only did the proposed height exceed the recommended 10-story minimum for High Street, but the proposal also had ground-floor retail, lots of bike parking and a relatively large quantity of affordable units in a market desperate for them. They were even proposing to make Cherry Street, which is already blocked off from access to High Street, as pedestrian-only space.

Unsurprisingly, the project was quickly approved, the old 3-story was demolished… and then nothing happened for a while. For almost 2 years, the site sat empty with little activity and even less news, which is almost always a bad sign that something behind the scenes has gone terribly wrong. We’ve seen that story play out with other proposals- think SPARC or the Millennial Tower, the latter of which is technically not canceled yet.
When, in July of last year, we finally got a project update, we saw just how wrong the situation had really gone.

Instead of 11 stories, the project had been slashed almost in half to just 6. The number of apartments had dropped from 120 to 70. The retail element had been removed entirely, bike parking had been reduced by 70%, car parking spots had more than doubled and they were no longer going to convert Cherry Street into a pedestrian area.

Even worse, the design had been radically changed to a standard gray box, and the developer had even decided to lower the building’s quality by using cheaper materials throughout. It seemed like a classic bait and switch, like going to a restaurant, ordering the filet mignon and then receiving a half-eaten, cold hamburger that the cook dropped on the floor and then spat on.
Probably thinking that they would receive pushback for a significantly more terrible project, Crawford-Hoying came out with a litany of excuses, but their primary one was that the affordable unit component had become financially unworkable due to rising construction costs.

To say that excuse was a little suspicious is underselling it. It is true that the cost of building materials has risen in recent years, partially due to demand and partially due to trade wars, but few local projects seem to be citing material prices as holding back construction. Indeed, development in Columbus has continued at a brisk pace. If anything, the quantity of ever-larger proposals has actually increased around the city, including several at or above 10 stories.

While the financial problems could have been unique to Crawford-Hoying and this project, they really went about solving the issue in the most curious of ways.

The main problem with the financial excuse is that if the affordable units were cost-prohibitive, why not either reduce the number of affordable units or do away with them altogether? They were under no obligation to build a project with most or all of its units being classified as affordable, so there was no reason why that plan couldn’t change once they realized the financials couldn’t support it.

The reason why developers go with market-rate is that they can obviously make more money doing so. With the booming population growth and the ongoing rise of the RiverSouth district, they would have had little trouble finding renters even at much higher prices.

The increase in parking is also problematic to the financial excuse. For developers, building dedicated parking space is often one of the most expensive additions to a project, as this study goes into. This is why many cities are moving towards less restrictive parking minimum requirements or getting rid of parking requirements altogether.

Since such restrictions tend to limit quality urban development, particularly from smaller builders that don’t have access to greater funding, it doesn’t make sense for cities to maintain parking standards that artificially hold back development. Crawford-Hoying is not a small developer, but if they are claiming financial hardship, why would they double parking instead of converting some or even all of that space to a larger number of market-rate units?

Furthermore, why remove the retail element when they could have made some longer-term money on rent? If they didn’t believe that the current market would support retail, it would’ve been easy enough to create space on the ground floor that would have been convertible to retail once it could.

They could have also completely changed the scope of the project altogether and not gone with residential alone. When 250 High was built across the street, in addition to the residential and retail elements, a large portion was also Class A office space, which filled rather quickly. Mixed-use development that includes multiple uses is far more likely to be financially workable, and it has been a proven way to construct urban development for centuries. Was such a project even considered?

All of this belies the fact that the company has built taller buildings recently. Their Moxy Hotel project nearing completion in the Short North is 10 stories, for example. The reality is that while we don’t know what the financials for the South High project looked like, at least on the surface, the excuses for the much watered-down size and design do not make much sense given other choices.

Meanwhile, just across the river in Franklinton, there are plans for multiple projects exceeding the height of the original 11-story proposal. It’s fantastic that many neighborhoods around the city are seeing quality, mixed-use development at a good density that promotes street vibrancy, but Downtown continues to languish in this regard with too many mediocre, low-rise proposals along some of the most important corridors in the city.

The Downtown Commission rolled over and approved the new High Street proposal with virtually no changes, as they’ve done with several other projects around Downtown, so perhaps Crawford-Hoying really had nothing to worry about, after all. If the Downtown Commission won’t even uphold their own development guidelines on major corridors like High Street, why should developers even try to reach them?

There are still many vacant lots and underutilized sites across Downtown, including some left on South High. We can only hope that future proposals will give them the respect they truly deserve.

247-255 S. High Street is currently well into construction and should be completed sometime next year.