A Slow Year Still Dishes Out a Little Development News 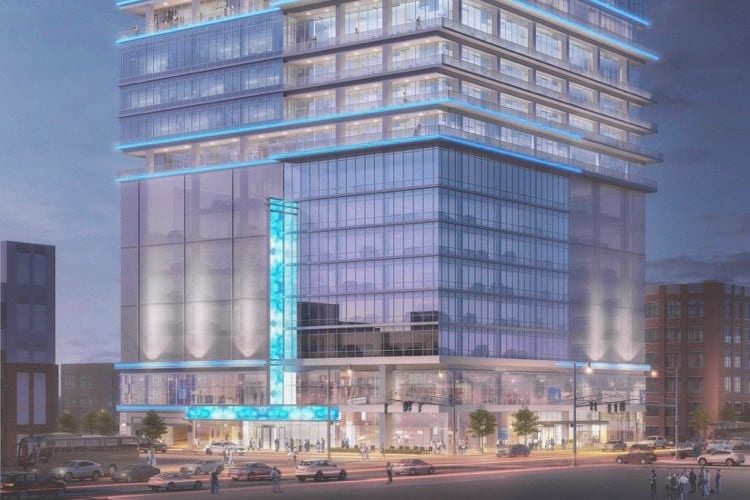 Because 2020 has largely been a dumpster fire imitation of a Mad Max movie, development news took an extended break for much of it.

Even though none of the issues have really gone away- and in some cases, intensified- new development announcements and updates on old proposals have started slowly trickling out of the nether. Let’s take a look at some of the more significant development news.

Harmony Tower
Arguably by far the biggest development news of the year to date, Harmony Tower is a proposed 30-story, mixed-use building at 150 N. High Street Downtown. Taking the place of one of the last surface parking lots fronting High Street, Harmony Tower would contain office and retail space, a new hotel and 15 floors with an undetermined number of condos, a residential type that has been lacking in the Downtown area in the recent housing boom.

I’ve talked before about how High Street Downtown has been one of the most underserved corridors in the city regarding new development, with most projects coming in with poor designs, poor quality, too short in height or all of the above. Harmony Tower- if it ends up being built, that is- would shatter that record and provide the first skyline-altering project to come to High Street in decades. In fact, now that Market Tower has been significantly scaled back in height, Harmony would be the first new tower to reach the 30-floor mark since the William Green building was completed in 1990.
Actual construction could be a few years away.

Wexner Medical Center Tower II
We’ve known for some time that there would eventually be a second hospital tower built next to the Wexner Medical Center on Ohio State’s medical campus, but the only detail available was that it would contain about 840 patient rooms, roughly double that of the original tower. In late June of this year, Ohio State filed a plan with the city that would include a 27-story medical tower, 6 stories taller than the adjacent 2013 building and by far the tallest building on campus.

The final design is still in the works, but earlier renderings suggested it will look somewhat similar to the first tower and be built in a north-south orientation facing the Olentangy River and Rt. 315. Construction was originally scheduled to begin after a new, adjacent parking garage was completed, but it may be delayed until sometime in 2021 or early 2022.

Millennial Tower
Contrary to popular belief, this long-gestating project may not, in fact, be completely dead. The 28-story, mixed-use project proposed for the RiverSouth neighborhood Downtown in 2016 had been out of the news since for nearly 2 years. This lack of news, despite the project being approved by the Downtown development commission back in early 2018, caused most people to assume it had been abandoned. The skepticism was somewhat justified, as the proposal’s developer, Arshot Investment Corp., had recently had a very public failure in getting its SPARC project off the ground at the Cooper Stadium site.

Apparently, however, Millennial is not dead and the concept is at least still being pushed behind the scenes. This is according to Andy Mills at Elford Reality, which is representing the project to prospective tenants. Mills stated that the project is still in the works, but gave no additional details on what that really means in terms of seeing an actual groundbreaking at some point.
Let’s just hope that should this project eventually move forward, it gets a new name as part of its rebirth.

Price and High
We thought the long-running drama between Bret Kaufman and the Victorian Village Commission on Kaufman’s proposed mixed-use project for this off-High Street site in the Short North was over. Apparently not. Kaufman abandoned its project after a few years of haggling with the commission and local residents to gain approval for any of the dozen or so proposed iterations. It was all to no avail, so the developer took an extended step back.
Kaufman ended up coming back to the table with yet another new design for the project, this one 8 stories with 166 residential units.

During the first approval process, there was another attempt to fight to kill it, but ultimately failed. The proposal made it past its first approval, but Kaufman must come back with more details on a potential final design- and must face the same angry neighbors that successfully caused the developer to walk away from the project previously. Needless to say, there is no guarantee we’ll see anything substantial built at this site in the near future.

South Side Giant Eagle Site
Giant Eagle is closing its grocery store on East Whittier on the border of German Village and Schumacher Place due to the store being too small to update. Developer Pizzuti quickly acquired the desirable site and has recently proposed a 5-story, mixed-use project there with more than 300 apartments.

Normally, such a project on the Near South Side would be dead on arrival due to rampant NIMBYism, but because this project is in Schumacher Place rather than German Village, anti-development interests have far less say in determining what goes on the site. That, of course, does not mean that local residents won’t try to stop it.

Indeed, they are already trying to organize opposition to the project, citing everything from property values being affected to the baffling assertion that construction should not happen during a pandemic.
Needless to say, if built as proposed, would be one of the largest new developments on the South Side in a very long time.

Neil Avenue Giant Eagle Site
Finally, we have yet another Giant Eagle, this one on the edge of Victorian Village, that announced in 2016 that it would be closing. Speculation soon turned to what might happen to the site once the grocery store vacated. As with the above Kaufman project, there was an expectation that development proposals would be met with a serious fight. However, like the South Side Giant Eagle site, this one lies just outside the purview of the neighborhood commission. Given that the Westminster-Thurber complex immediately to the south contains residential towers- and will be getting another one soon, the Giant Eagle site might be approved for a similar tower of 10 or more stories in an overall mixed-use project.

Casto will be heading up the redevelopment of the site. Hopefully, we can get some renderings soon.