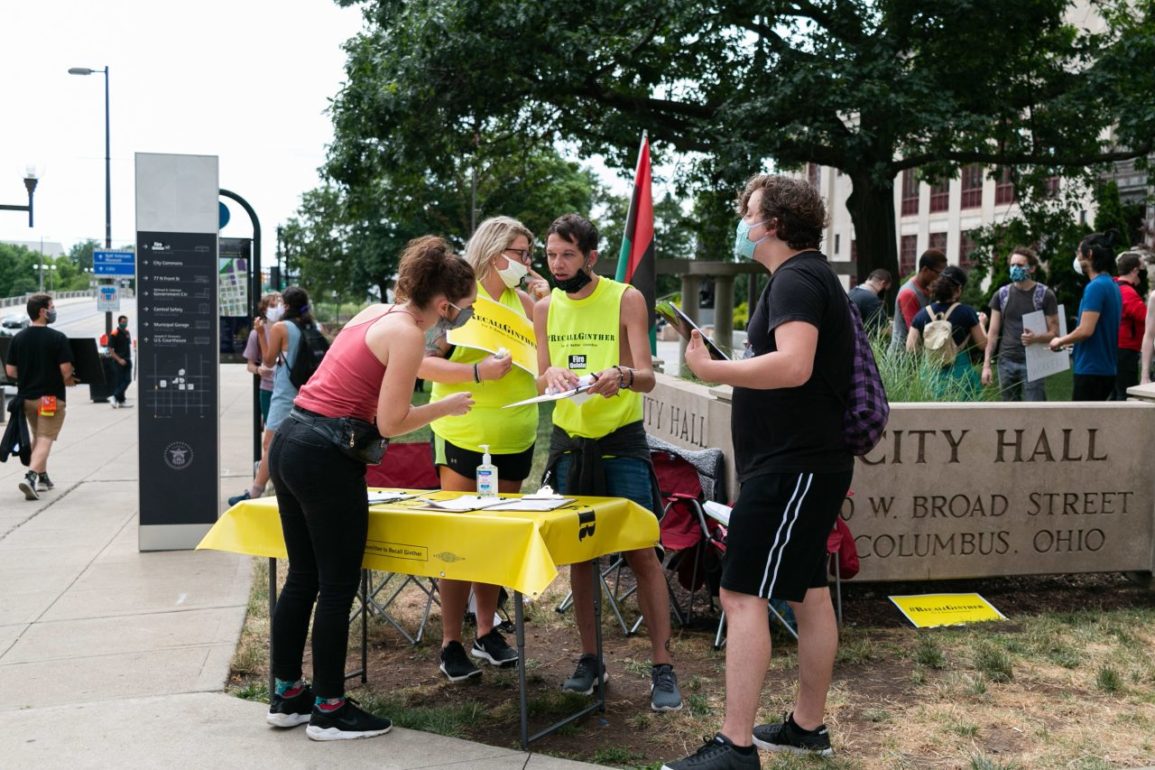 Members of the Committee to Recall Ginther collect signatures for a petition to do just that: recall Mayor Andrew Ginther. As of July 3, the petition had several thousands of the needed 15,000 signatures. Photo credit: Marisa Twigg
News

Some Columbus Residents Want To Recall Mayor Ginther. What Happens If He’s Out?

Just days after Columbus’ first protests erupted over the death of George Floyd, calls for the resignation of Mayor Andrew Ginther over his response to police brutality poured out from residents on social media, and by the third day, a Change.org petition had been started.

Since the petition’s launch on May 30, it’s garnered more than 25,000 signatures — but none of them count.

“The online one is not legal. In Ohio, you can’t do legal online petitions,” Bryce Sampson, an organizer for the volunteer-run Committee to Recall Ginther, explained during the #RecallGinther Launch Rally on June 28.

WHAT’S A RECALL, AND HOW DOES IT WORK?

A recall election, also known as a recall petition, is the method by which registered voters in Columbus can remove an elected official, such as a mayor, from office through a direct vote even before that official’s term has ended.

Each city outlines how a mayor can be recalled from office in its city charter, a document that establishes how a city is governed.The charter is created by a charter review commission and amended every 10 years by a new commission. In Columbus, the commission’s five members are appointed by council and the Mayor.

“The Recall Ginther Campaign essentially is to put the mayor on the ballot in November and give people an option of ‘Yes or no, do we want to keep him the mayor?’” Sampson, 29, said.

In Columbus’ charter, there are two ways the Mayor can be recalled. First, Mayor Ginther could resign, but he’s publicly said he will not leave office. Matter reached out for comments from the Mayor and his office, but did not hear back prior to publishing this piece.

“No, the people of Columbus elected me and re-elected me to do a job and that is to the reform the division of police, pursue this equity agenda and make sure justice is served and I’m going to fight every day in this office to get those things done.”

The other way the Mayor could be recalled is through residential petitioning.

But both Columbus and Ohio have particular requirements for petitioning that can make it difficult for residents to put items to a city vote.

Petitioners have just 30 days to gather the required number of signatures necessary — a total of 15,000 out of nearly 1 million residents — to put a vote on Ginther’s current status as mayor on the November ballot.

But because of Ohio’s rules on petitioning, signatures cannot be collected online and must be collected in person — even in the middle of a pandemic.

What’s more, only 200 words are allotted to describe why the mayor should be recalled. That’s roughly one paragraph.

“We could have literally written a book about this,” Sampson said. The petition states that Mayor Ginther should be recalled for gross incompetence and breach of public trust.

But on June 8, City Attorney Zach Klein said the group needed to refile.

“[He] said that the petition wasn’t valid because it didn’t have page numbers on it,” Sampson said. “And on the second page, there was like two lines that were 11.75 font instead of 12.”

So on June 9, instead of starting with close to 2,000 signatures, the effort dwindled back to zero.

As of July 3, the petition had several thousand signatures, Sampson said in a text, adding that the group is still waiting for volunteers to turn in petitions by July 6.

WHAT HAPPENS IF THE PETITION REACHES 15,000 SIGNATURES?

In order to be approved by Blevins, the city clerk, the petition needs 15,000 sufficient signatures by July 9 to reach the ballot. If Blevins approves the petition, Mayor Ginther has five days after the approval date to either announce he will remain in office, or officially resign and forfeit office.

If Ginther chooses to resign, he would be succeeded in office by current City Council President Shannon Hardin immediately. Hardin would no longer serve as a council member and would remain Columbus’ mayor until Jan. 1, 2021, after the November 2020 municipal election. In this scenario, a special mayoral election would be held during the next municipal election, and the new mayor would take office on Jan 1, 2021. The mayor would serve for the remainder of the unexpired term, according to the city charter.

If Mayor Ginther declines to resign, the city clerk would add the Mayor’s recall to the upcoming November 2020 municipal election and his position as mayor would be up to Columbus residents to vote him in or out of office by a majority vote. Ginther would also have 200 words on the ballot to explain why he should retain office.

In the event that residents were to vote Ginther out of office this November, Council President Shannon Hardin would still be Ginther’s mayoral successor. In this scenario, Hardin would again serve as Columbus’ mayor, but only until Jan. 1, 2022, according to the city charter. A mayoral election would be added to the November 2021 municipal election.

Like many other mayors across the nation, Ginther now faces handling a pandemic, a recession, civil unrest — and his own resignation.

“Mayor Ginther being recalled or resigning is only one step in a longer process toward prison and police abolition. We do not just want Mayor Ginther out, we do not just want the police chief out of office,” Prince Shakur, an event speaker and organizer with the Black Queer and Intersectional Collective in Columbus, said to the #RecallGinther crowd outside City Hall on June 28.

“We want democratic control in our city and a sense beyond anything that we can imagine. The City of Columbus does not get to dictate what path we pave in our work towards liberation,” Shakur said.

Sampson said the group as well as those signing the petition are tired of the police brutality, violence and killings of Columbus residents at the hands of police with little to no accountability.

Matter has documented numerous instances of potential police misconduct and excessive use-of-force during Instagram livestreams at many of Columbus’ Black Lives Matter protests, like when Columbus police officers in riot gear dragged a woman into the street and threw a man to the ground during the early hours of June 29.

“The lack of leadership he showed, and just those first few days of like not standing up whatsoever. Like it almost was like he was kind of like just hiding … not saying anything,” Sampson said. “And then, too, like when other leaders were out here on the streets, you know, like Shannon, Joyce, Kevin — getting pepper sprayed — you know, where was he at?”

So far, several other mayors across the nation have faced similar calls for resignation over the way they’ve handled their constituents’ demands for racial justice.

In Healdsburg, California, Mayor Leah Gold was the first in the nation to resign from office over public pressure from the BLM movement in her city. Gold had refused to hold meetings with other city officials to discuss police use-of-force policies in the city, dismissing the need for the conversation.

Two other mayors — one in Ypsilanti, Michigan and another in Temecula, California — have resigned over racist comments, the latter after an alleged voice-to-text email “error.”

Back in Columbus, local activists and organizers have been frustrated since some of Mayor Ginther’s earliest decision-making regarding the police department.

“The fact that he even hired Quinlan back in December instead of [Perry] Tarrant, who the community put a lot of their support behind, shows that he just doesn’t care,” Sampson said. “He’s going to do what he wants. He’s going to put the people in support that are going to continue supporting his agenda and not listening to the community at all.”

This story originally appeared on Matter News on July 3, 2020. You can view the original article here.