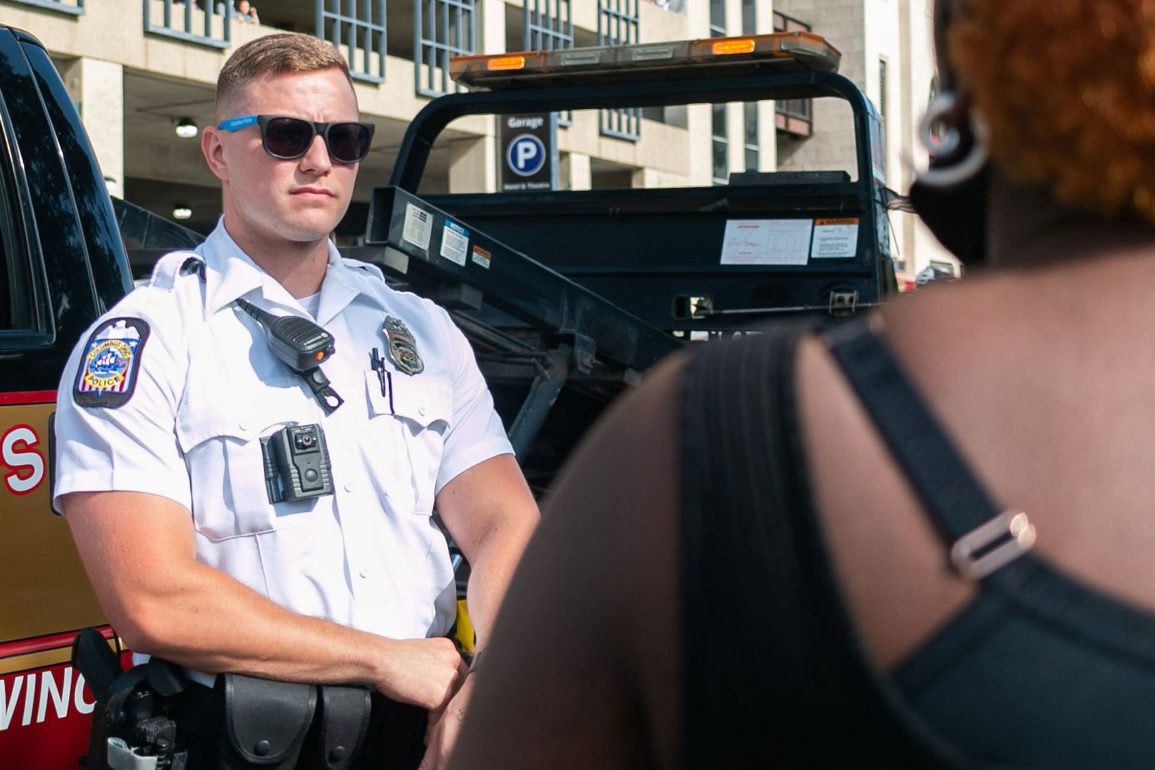 A Columbus police officer wearing a body camera on his chest stands between a protester and a Maynard's Towing truck at the Recall Ginther Rally held at Columbus City Hall on June 28, 2020.Marisa Twigg
News

Next-gen body cameras are coming in 2021, but until then, here’s a closer look at how the current body cameras at the Columbus Division of Police are meant to function.

That behavior blatantly violated Columbus Division of Police policy, prompting Coy’s termination in December, and this month, a $4.5 million investment in new body cameras from the City plus the introduction of a new body camera law named in honor of Hill, proposed by his daughter Karissa.

Body cameras have been in use by Columbus police officers for nearly five years now, but the policies surrounding their use are not always followed and many experts question how effective the cameras are, especially when it comes to racial disparities in policing.

Until the new body cameras are issued, here’s a closer look at how the current body cameras at the Columbus Division of Police are meant to function.

The City announced in 2015 that officers would begin wearing body-worn cameras by the end of the next year. Officers were issued body cameras starting in 2016 using a “phased in” approach, with traffic patrol and bicycle officers the first to receive the recording devices.

About 47% of law enforcement agencies in the U.S. had implemented body cameras by the time Columbus issued them, according to the Bureau of Justice Statistics, with 80% of those agencies saying the main reasons for the cameras were to improve officer safety, reduce civilian complaints, increase the quality of evidence and reduce agency liability. Ginther touched on these in a news brief from 2015.

Since then, at least 1,000 Columbus officers’ uniforms have been retrofitted with body cameras.

“Every police officer with the ranking lower than lieutenant is issued a body camera,” Sgt. James Fuqua, spokesman for the Columbus Division of Police, said. “Lieutenants are rarely in the field where they would need one, that is why it is not mandatory.”

Body cameras cost about $1,000 per unit, according to Fuqua, and that does not include the cost of storing the audio and video the devices capture. He also said that CPD keeps these recordings for two years. Given the scenario that one of these recordings becomes evidence in a particular case, CPD keeps it forever as a result.

Police must turn body cameras on in many scenarios, but don’t always follow procedure

Officers are required to activate their body-worn cameras, sometimes referred to as BWCs, at the start of any enforcement action. According to Chapter 11 of the Division Directives, that includes each time police are dispatched, all investigatory stops, any calls for service, traffic and pedestrian stops, any use of force, suspected OVI stops, arrests, forced entries and any time a situation becomes adversarial.

Although officers are required to turn on their cameras at the start of these situations, that doesn’t always happen for a number of reasons.

For starters, the riot gear uniforms officers adorn during civil unrest do not accommodate body cameras because the gear was purchased prior to the Division’s implementation of the cameras in 2016.

The camera’s batteries also present a barrier to proper use. Batteries can last an entire 12-hour shift with little activity, according to Fuqua. On a less active day, though, he said a camera’s battery can last up to six hours during one long recording situation.

But on a very active day, the camera can only record for two to four hours at a time, he said.

Patrol vehicles do not have the ability to charge camera batteries, which means that on a busy day — like during this summer’s Black Lives Matter protests in downtown — not all enforcement actions are being recorded per policy.

“Cameras often run out of battery before an officer is off duty,” Fuqua said, adding that officers “can dock them in their cars and review footage.”

But even when officers have charged body cameras, they don’t always follow the procedure to use them.

Coy was fired from the Columbus Division of Police in December after he shot and killed Andre Hill and didn’t turn on his camera. His partner, Officer Detweiler, also didn’t turn on her camera, but remains on the force.

Kareem Ali Nadir Jones<, a Black man from Franklinton, was 30 years old when he was fatally shot by officers Samuel James and Marc Johnson on July 7, 2017, hardly one year after some police were issued body cameras. Jones died from the gunshot wounds three days later. His killing was the first ever to be recorded on body cameras in Columbus and used as evidence during an investigation, according to the Columbus Division of Police. All body-worn cameras have a 60-second look-back feature that captures the previous 60 seconds of video immediately prior to activating the camera, but the feature does not capture sound. There is no audio for the first 60 seconds of James’ recording. No one can hear what the officers said when they approached Jones, guns drawn as soon as they exited the vehicle. The audio in James’ body camera footage doesn’t start until after Jones is bleeding on the ground, indicating that James activated his camera only after he shot Jones. Johnson did not turn his camera on until well after the incident.

Neither officer was indicted. Jones, whose empty hands were in the air when officers arrived on-scene, did have a gun in his waistband. His sister said she thinks he was attempting to throw the gun, but according to a report from WOSU, Jason Pappas, former president of the local Fraternal Order of the Police and current vice president, said officers are not trained to use “less than lethal force in a lethal situation.”

Researchers, police departments and activists have pointed to the idea that body-worn cameras would provoke officers to better adhere to department procedures and refrain from misconduct, unprofessional behavior and use of force because they’re being recorded.

But experts say there isn’t too much research that exists on the effectiveness of body cameras in policing, especially when it comes to their impact on racial disparities in communities.

“This rapid adoption of BWCs is occurring within a low information environment,” states a 2016 study from the Center for Evidence-Based Crime Policy at George Mason University. “Researchers are only beginning to develop knowledge about the effects, both intentional and unintentional, of this technology.”

Much of the research that is available focuses on individual police departments.

In 2014, for example, a study on the Rialto Police Department in California indicated a 59% decrease in police-reported use-of-force incidents for officers who used body cameras. The same study also found that the use of body cameras reduced civilians’ complaints by 87.5%.

More recent research, though, indicates that the effectiveness of body cameras is still a mixed bag.

More than 2,000 officers were evaluated in a 2017 study in Washington, D.C. that found body-worn cameras barely affected their behavior.

“These results suggest that we should recalibrate our expectations of BWCs’ ability to induce large-scale behavioral changes in policing,” the paper stated.

Another study published by the Urban Institute a year later looked at 504 Milwaukee Police Department officers and found that those who wore body cameras conducted fewer subject stops, which is when an officer temporarily detains a person for questioning and investigation. Not only that, but officers with cameras were less likely to receive a complaint than those lacking them.

But the study also found that body cameras had no effect on whether or not officers engaged in use of force.

Outside of complaints and misconduct, whether or not police accountability is increased because of body cameras is still questionable.

Even when body cameras are in use, it is still rare for police to be prosecuted for their misconduct or use of force. Only in a few cases has body camera footage been used to convict officers. It is actually much more likely for footage to be used in the prosecution of private citizens.

The Center for Evidence-Based Crime Policy studied survey responses from 321 state prosecutors’ offices in an attempt to understand the impact of body cameras in the court system.

Researchers discovered that, of the prosecutors’ offices in areas with body cameras, nearly all of them have used footage to prosecute civilians. Only 8.3% of offices in areas with body cameras said they’ve used body camera evidence to prosecute an officer. The study notes, though, that the total number of citizens is much higher than the total number of police prosecuted, so the percentages listed are not directly comparable.

Mayor Ginther said during his public safety investment announcement on January 21 that he believes body cameras have “proven invaluable to the community,” protecting both officers and the public’s trust.

But with the upcoming $4.5 million investment in new body-worn cameras and revised body camera policy at CPD, more information may be needed to determine the effectiveness of body cameras in policing.

“It is the cause for justice and police reform that continue to spur us to action, to implement change and stop the senseless killing of Black men in our city and in our communities across this country,” Ginther said during the announcement. “Columbus police were forced to acknowledge the limitations of our current camera technology following the death of Andre Hill.”