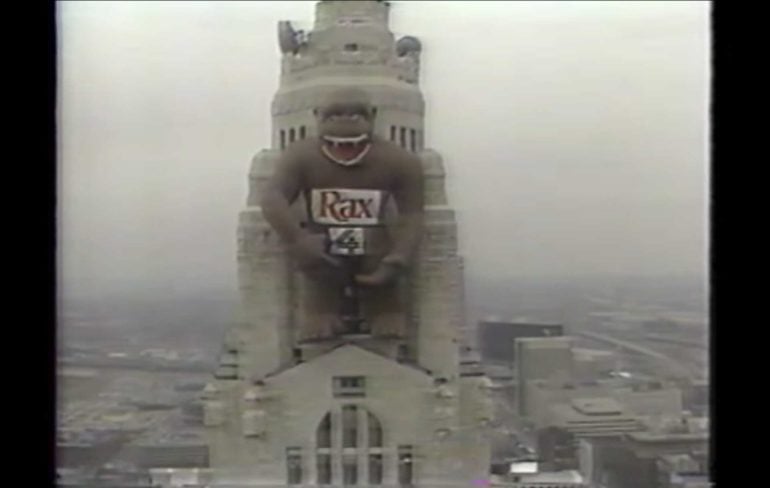 Lot’s of amazing things happened in 1988.

Prince Charles escaped an avalanche in Switzerland. Stephen Hawking published “A Brief History Of Time”. The first worm distributed via the internet was launched from MIT. I was born.

But none of it, even my birth, was as important as the day someone in this city decided that a massive inflatable gorilla, tens of feet tall, should be placed on top of our city’s most recognizable landmark.

That’s right people. A giant inflatable gorilla, covered with advertisements for Channe 4 (WCMH-TV) and Rax, was suspended hundreds of feet in the air on top of one of our city’s most beloved buildings.

Why, you ask, would there be a need for such a display? WCMH-TV was looking to promote their 3-D broadcast of Gorilla at Large, a 1954 movie starring Cameron Mitchell, Anne Bancroft, Lee J. Cobb and Raymond Burr.

The nearly ten-minute-long documentary shows the process of getting the gorilla onto the building. The installation crew fought high winds and inclement weather, but luckily for all of us, they were able to persevere.

Honestly, I feel so sad that I’ve gone through over 30 years on this planet and have only just now witnessed the slow process of a massive gorilla being inflated, set to the tune of James Taylor’s Up on the Roof.

I mean, was I even living? I don’t know. But one thing I do know for sure is that I’m going to take every opportunity to show this video to everyone I know. It also has me feeling like Columbus needs some more antics like this.