In 1962, The Columbus Dispatch Had Some Grand Dreams Of The City’s Future

We’re big fans of old Columbus-related memorabilia. From old board games, posters, postcards, and more. We snagged this copy of The Columbus Dispatch Magazine from October 14, 1962—thank you, eBay—and reading through it is like stepping into a time machine. A lot was happening in our city during its Sesquicentennial year. 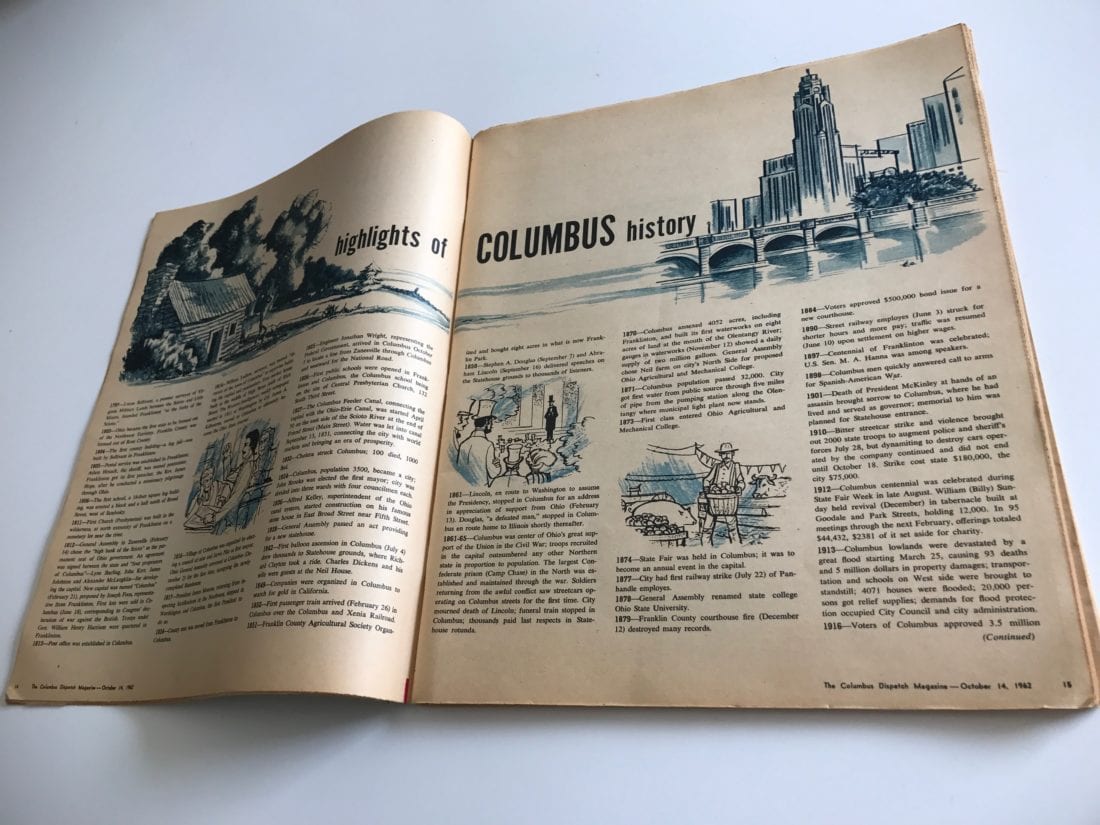 This issue of The Columbus Dispatch Magazine was a large reflection of our city’s history thus far. While so much has happened since its publication, this magazine is a wonderful way to look back even further into the history of Columbus. From businesses come and gone to buildings that are no more, Ohio’s capital city is was, and still is, ever-changing.

Here are a couple of things that I found interesting while flipping through the slightly yellowed pages of this unlikely treasure. 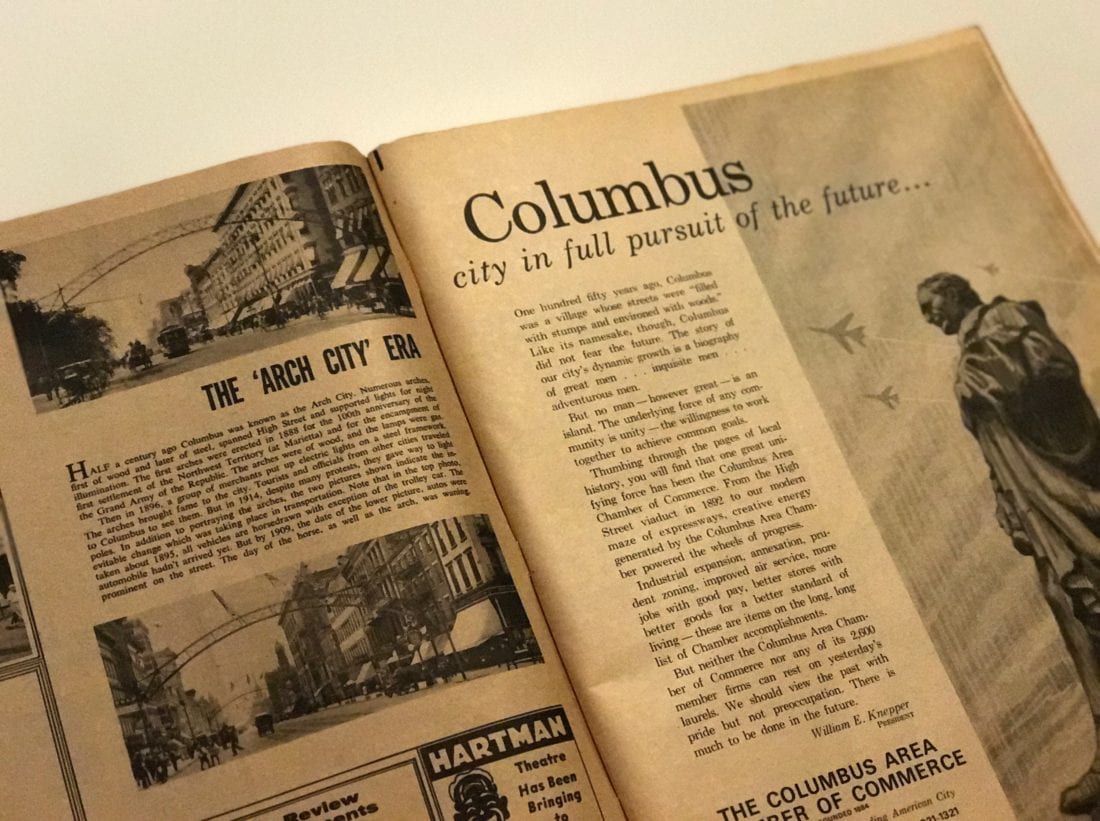 Did you know that the arches that line High Street were once made of wood and the lamps were powered by gas? They were first constructed in 1888. The snippet states that by 1909 “[t]he day of the horse, as well as the arch, was waning.” I’m glad the historic arches of Columbus continue to line our streets. Even if street lamps are the main source of lighting for our roads.

According to The Dispatch the Broad Street Bridge was built in the early 1820s and was a covered bridge until the 1880s. However, the covered “[b]ridge vanished with the era of horse and buggy.”

Today’s Broad Street Bridge was completed in 1992 and is the fourth bridge to cross the Scioto River at Broad. Looking at the pictures of the then-and-now screams “progress.” 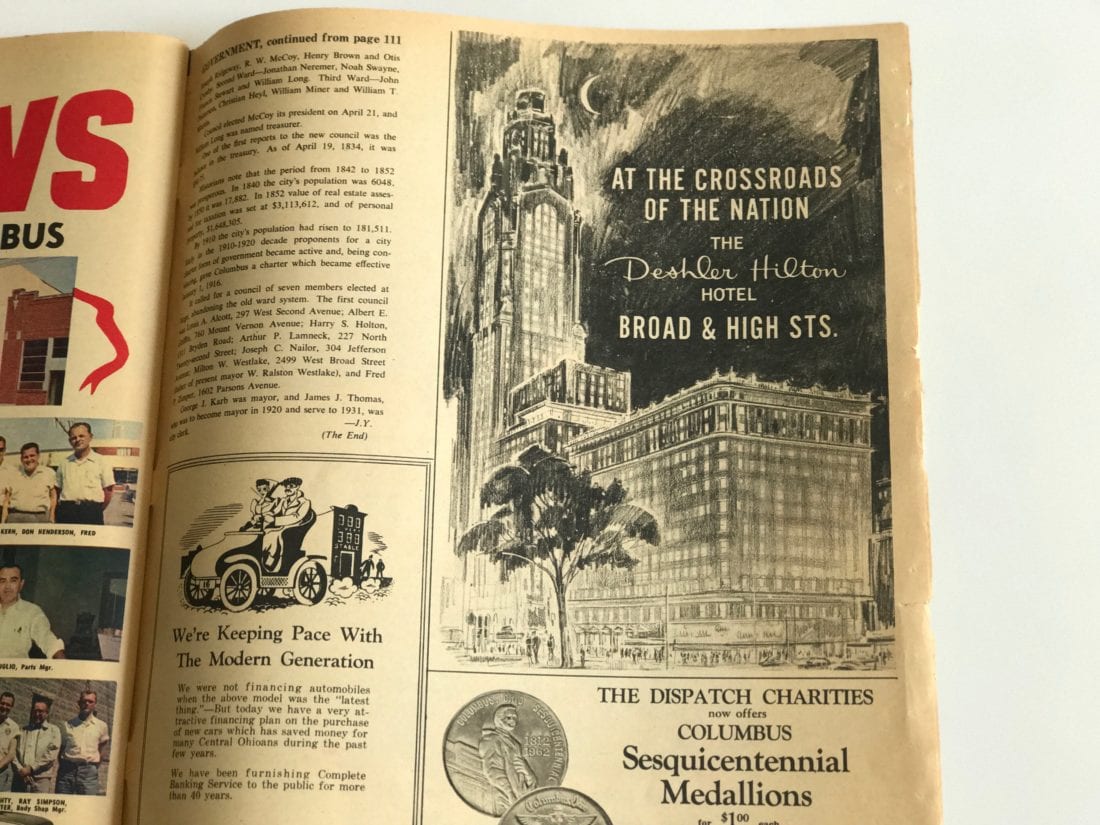 The Deshler-Wallick Hotel called Columbus home from 1916 until 1970. Just eight years after the publication of this magazine, the hotel was torn down and the hotel portion of the LeVeque Tower was converted into office space. Now, the LeVeque Tower houses Hotel LeVeque, a modern take by Marriott on the glamor of the building’s past. 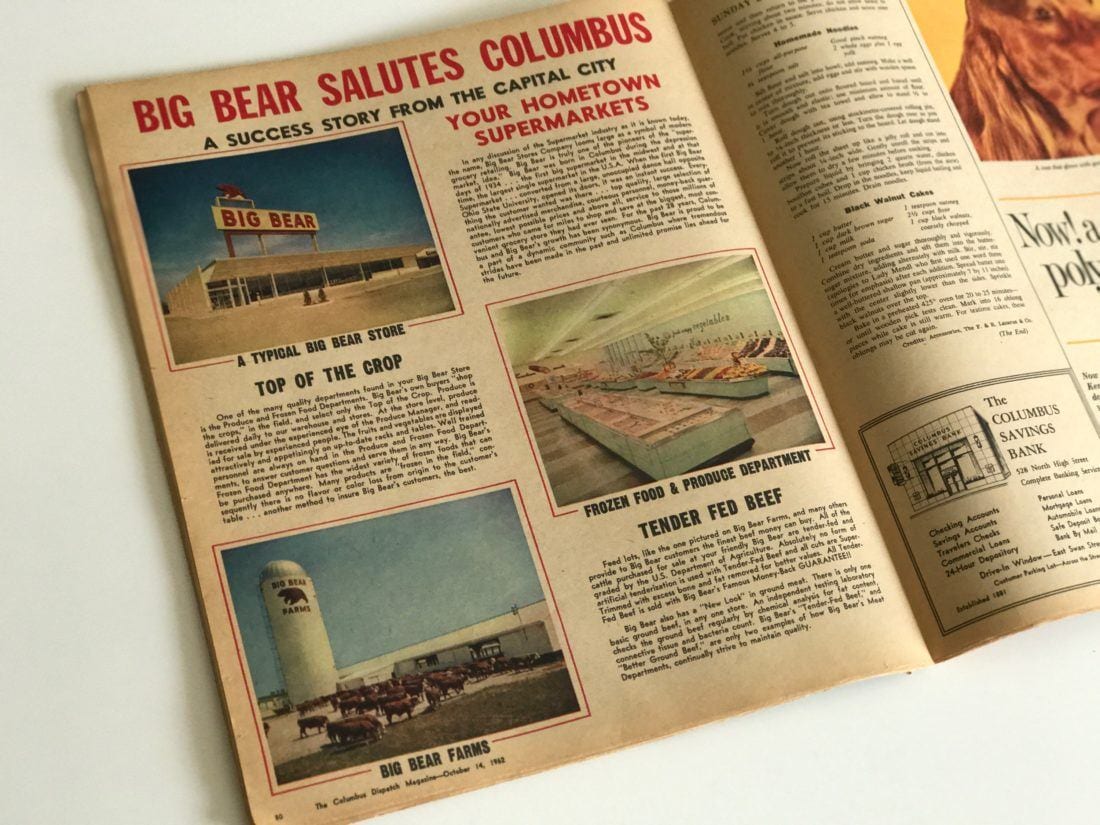 Big Bear was founded in Columbus in 1933 and was around until 2004. Back when this magazine was published, the grocery store chain was thanking Columbus for helping make it a “symbol of modern grocery retailing.” 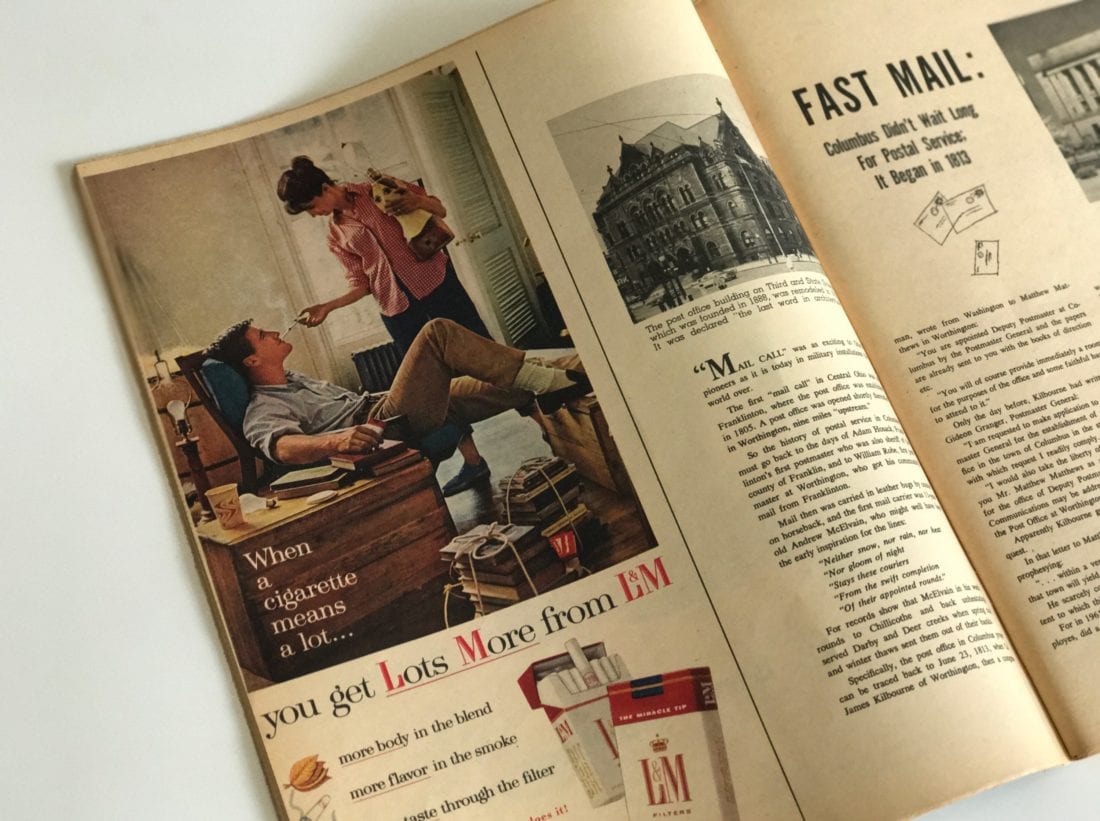 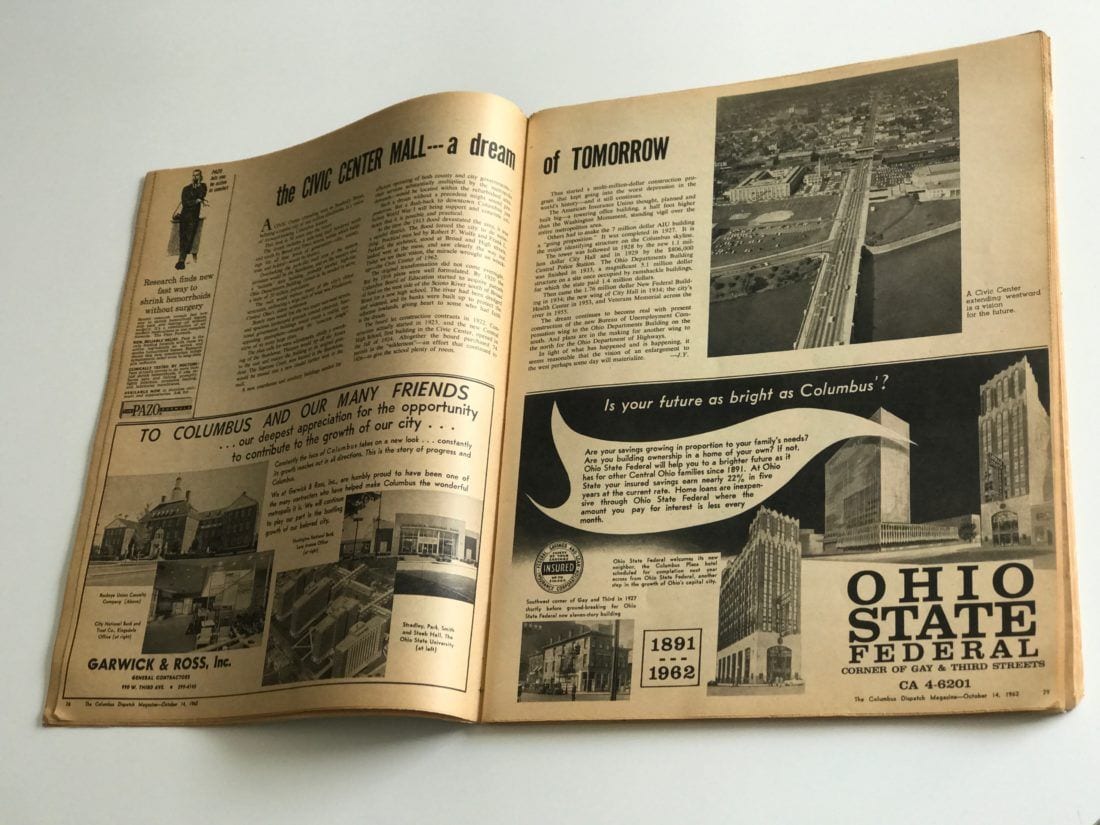 The City of Columbus has always been a big dreamer when it comes to development. Back in 1962, they envisioned a huge, mile-long mall that would have Broad Street and Town Street as its northern and southern borders. The project included totally revamping downtown. This idea is eerily similar to the projects being talked about for the Scioto Peninsula. 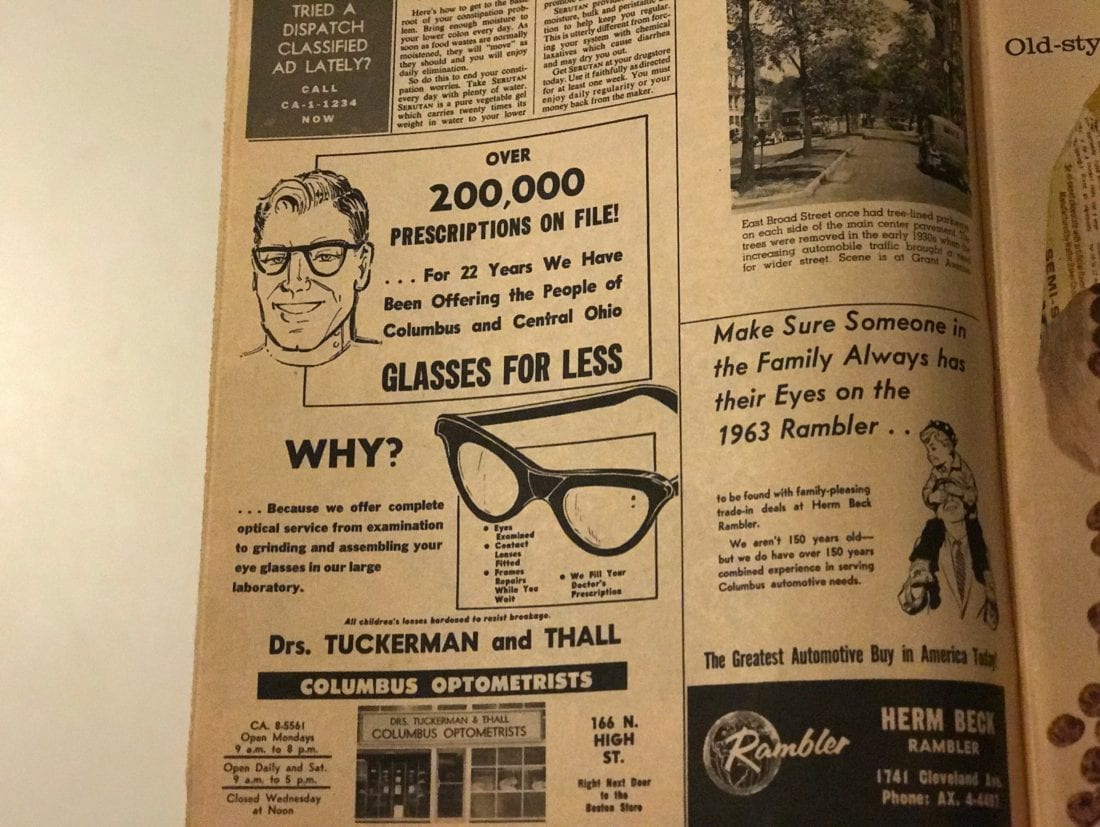 Fashion is a cycle and things always come back in style. Like these glasses! 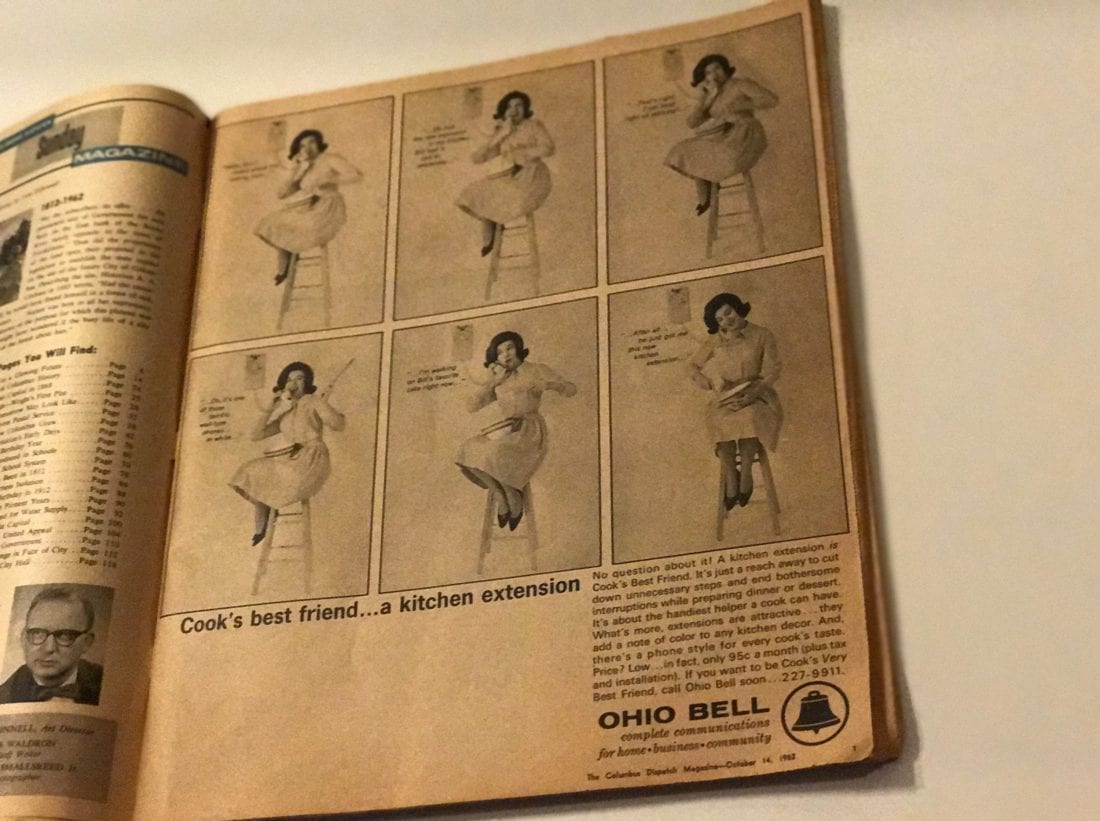 A telephone extension in the kitchen? Most people don’t even have home phones these days. Oh, technology. 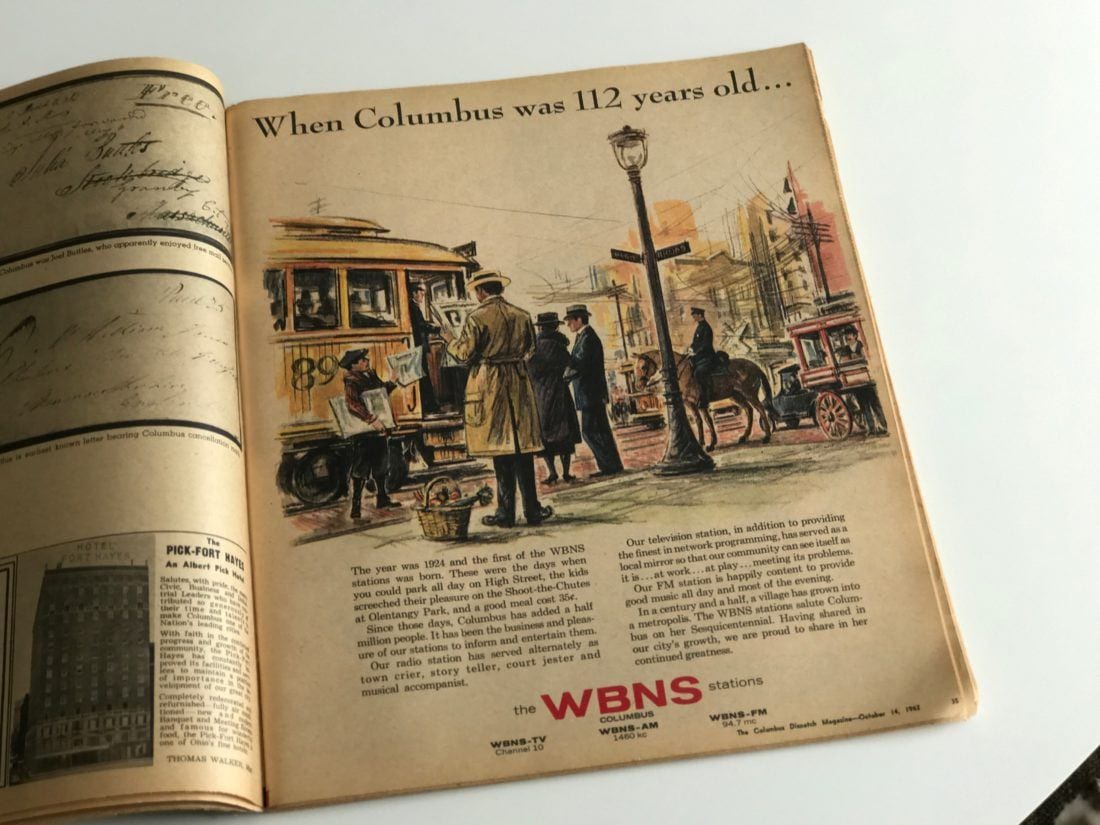 At the time of publication, WBNS had been broadcasting for 38 years and had seen the birth of the industry in Columbus. Now, WBNS has been serving Central Ohio for nearly a century. 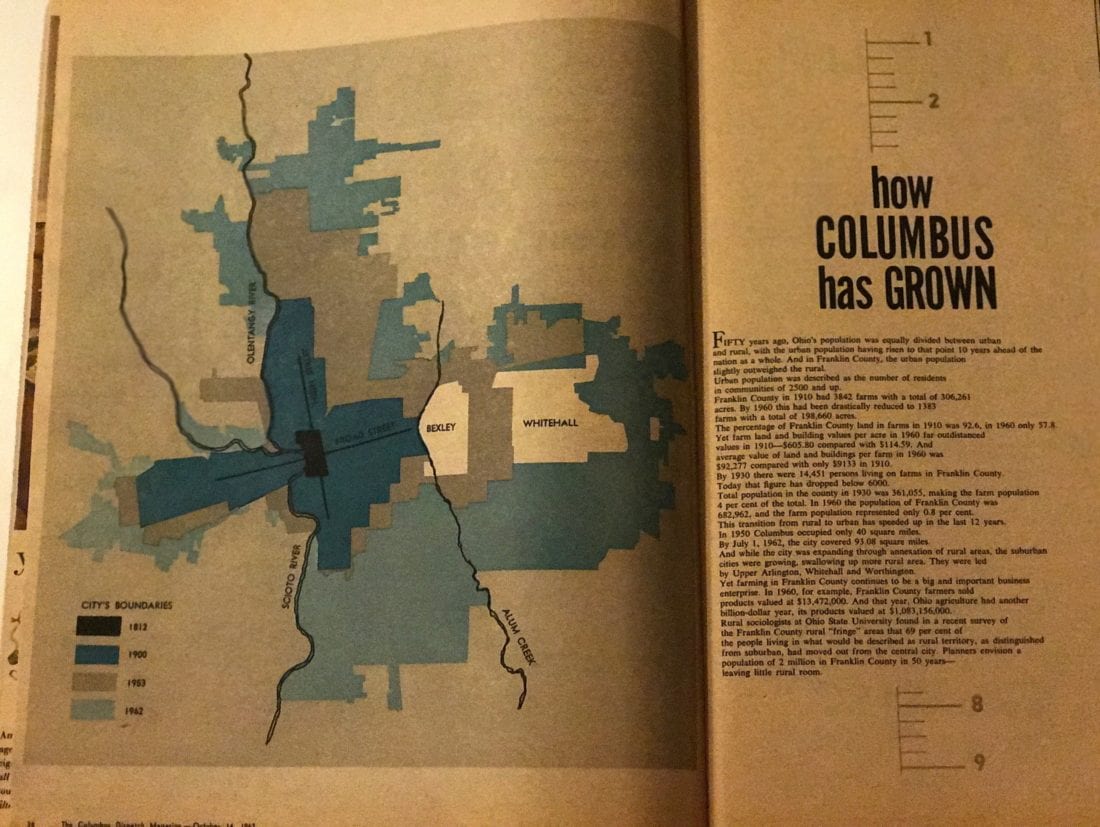 This is the Columbus of 1962. To see how the city has grown, click here for the city boundaries of Columbus today. 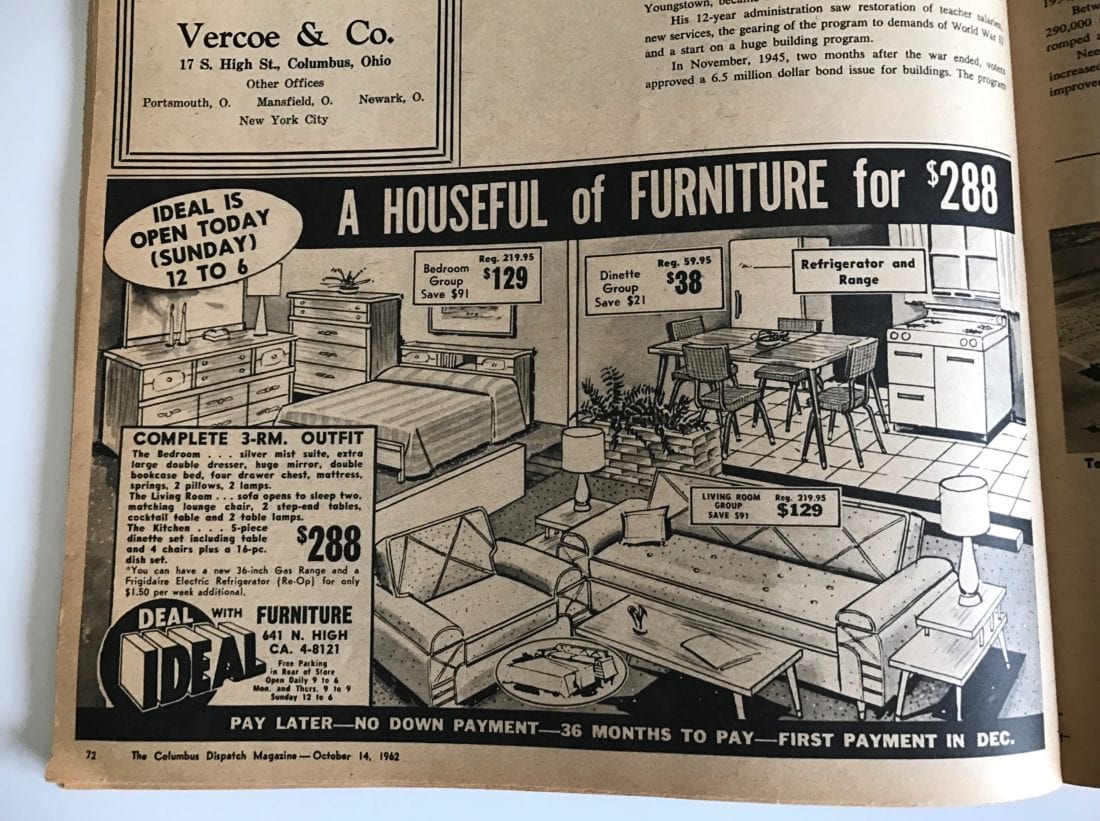 For just $288 you could buy enough to furnish half your house or an entire apartment. The steal of a deal included “a silver mist suite, extra-large double dresser, huge mirror, double bookcase bed, four drawer chest, mattress, springs, 2 pillows, 2 lamps” for the bedroom. For the living room, you’d get a “sofa [that] opens to sleep two, matching lounge chair, 2 step-end tables, cocktail table, and 2 table lamps.” Lastly, for the kitchen, buyers would receive a “5-piece dinette set including table and 4 chairs plus a 16-pc. dish set.” Wow! I wish this deal still existed. 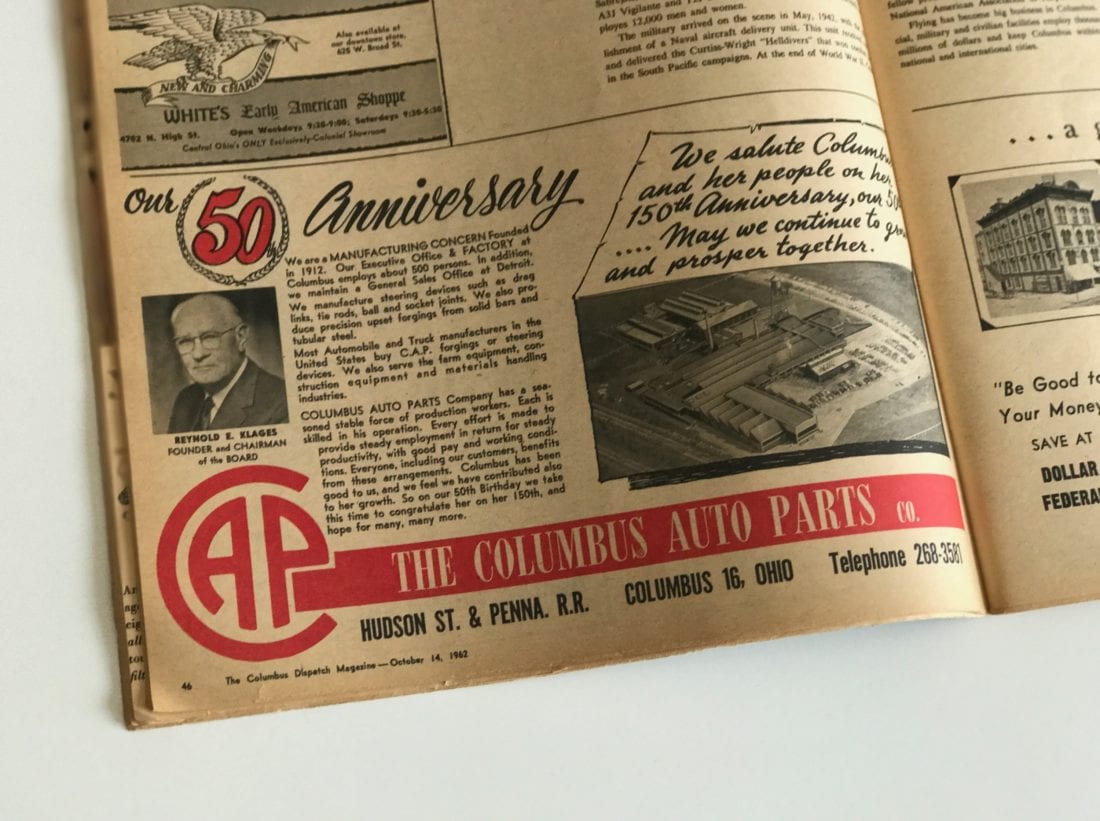 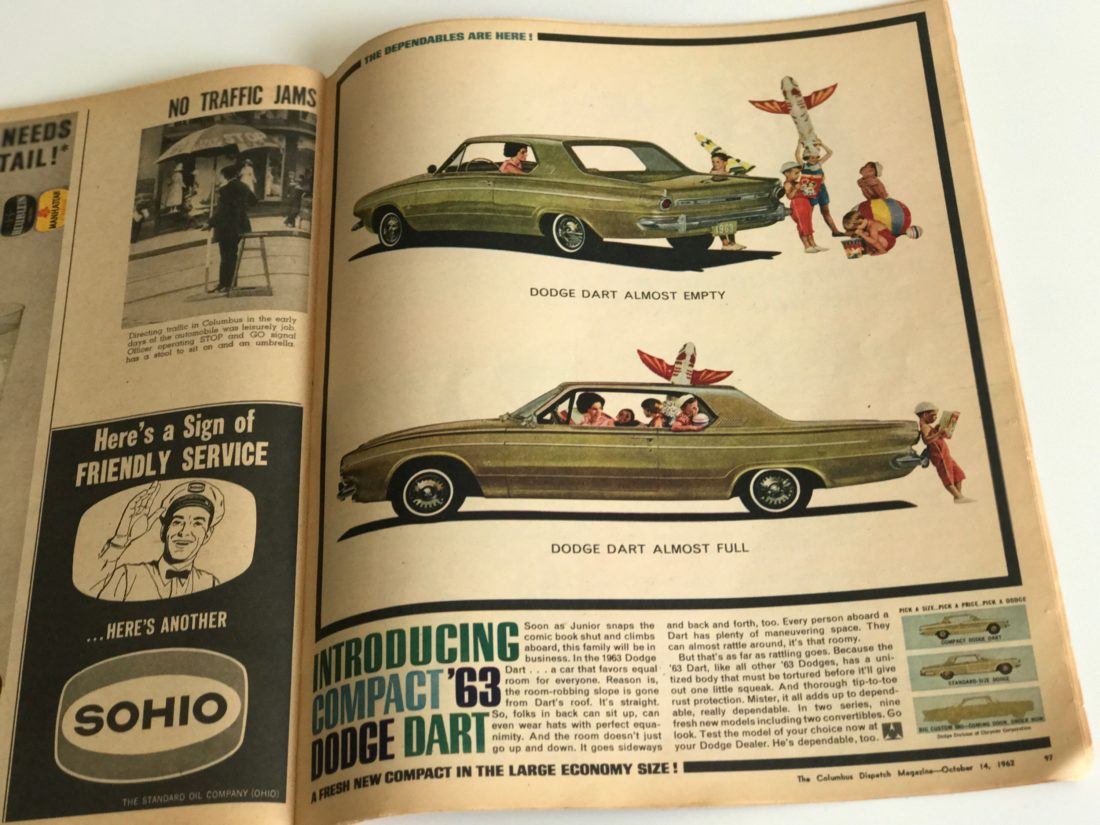 Back in 1962, the new Dodge Dart was worth around $2000 MSRP. It was the first year the car was offered in a compact model. Today a suped-up 1963 Dodge Dart can go for a pretty penny. 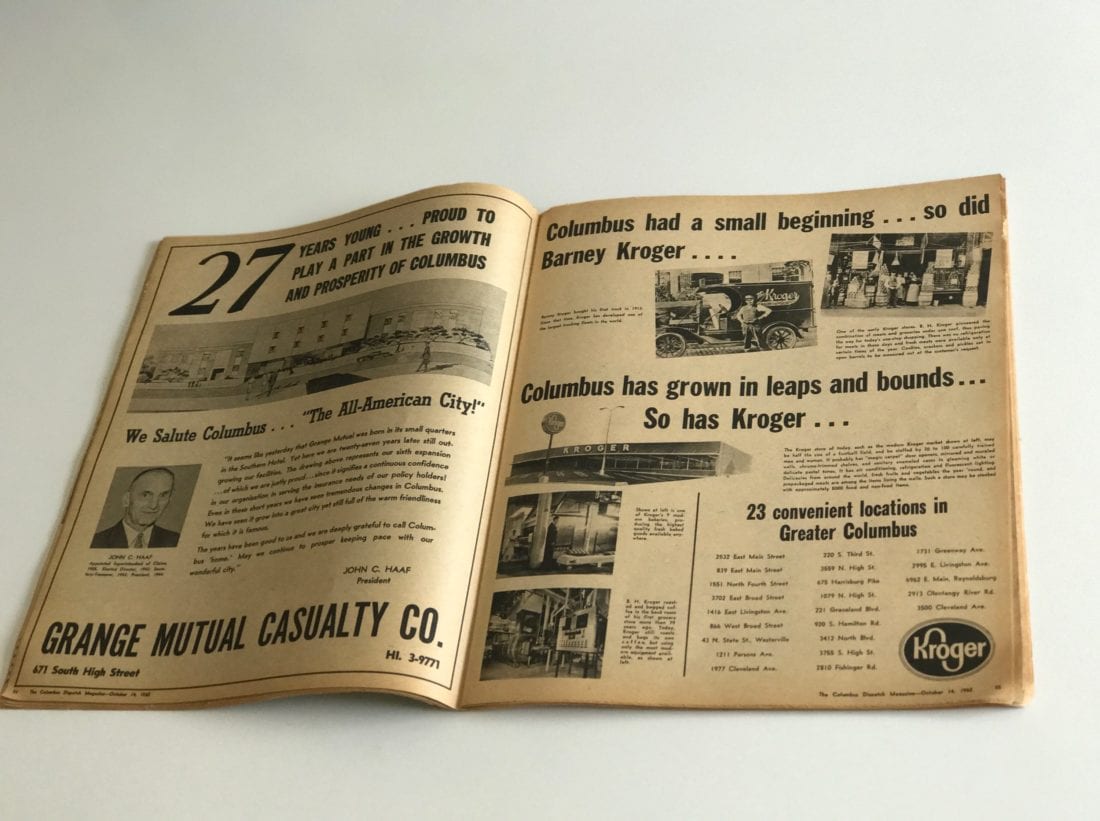 In 1962 there were 23 Kroger locations in Columbus. Now, Kroger has 50 locations for Columbus residents to choose from. 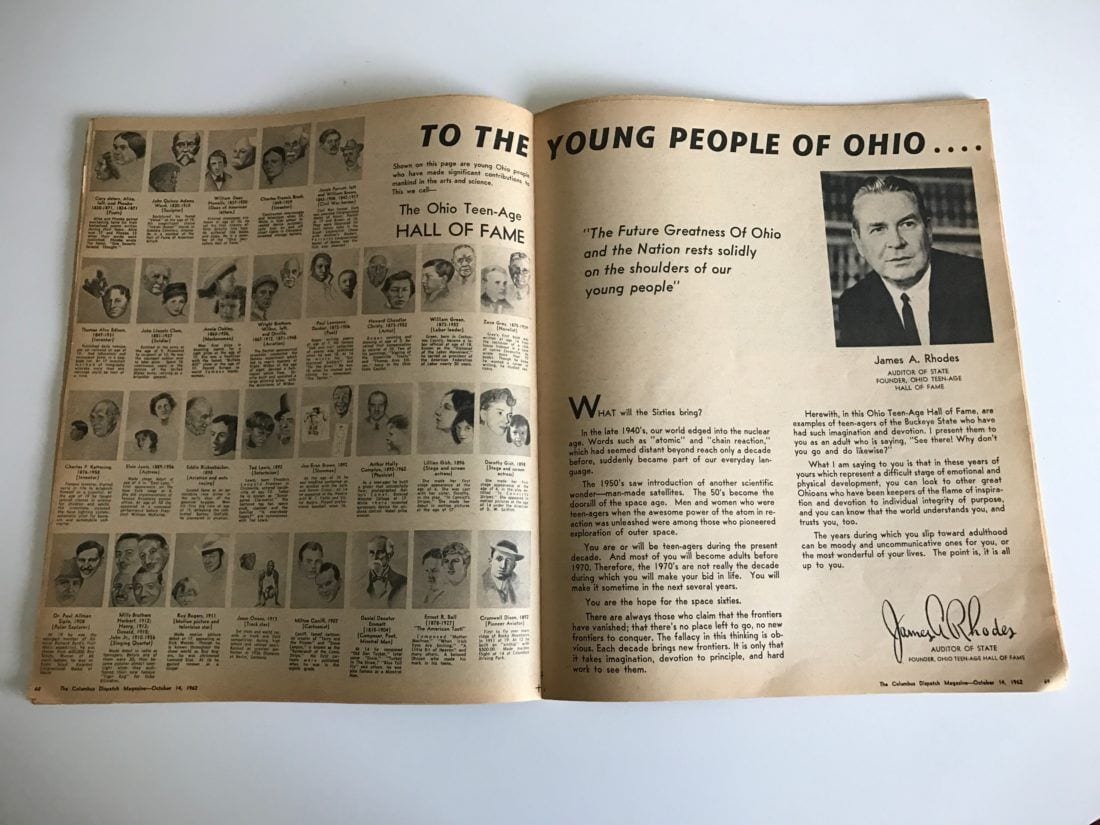 The 1962 Ohio Teen-Age Hall of Fame was full of young hopefuls from Ohio that “made significant contributions to mankind in the arts and science.” Notables are John Adams, Thomas Edison, the Wright Brothers, and Jessie Owens. I wonder what would the Hall of Fame look like today and whose faces would be added.

State Auditor James A. Rhodes had a message to the youth of Ohio back then that still applies today. He said, “I present [this Hall of Fame] to you as an adult who is saying, ‘See There! Why don’t you go and do likewise?'” 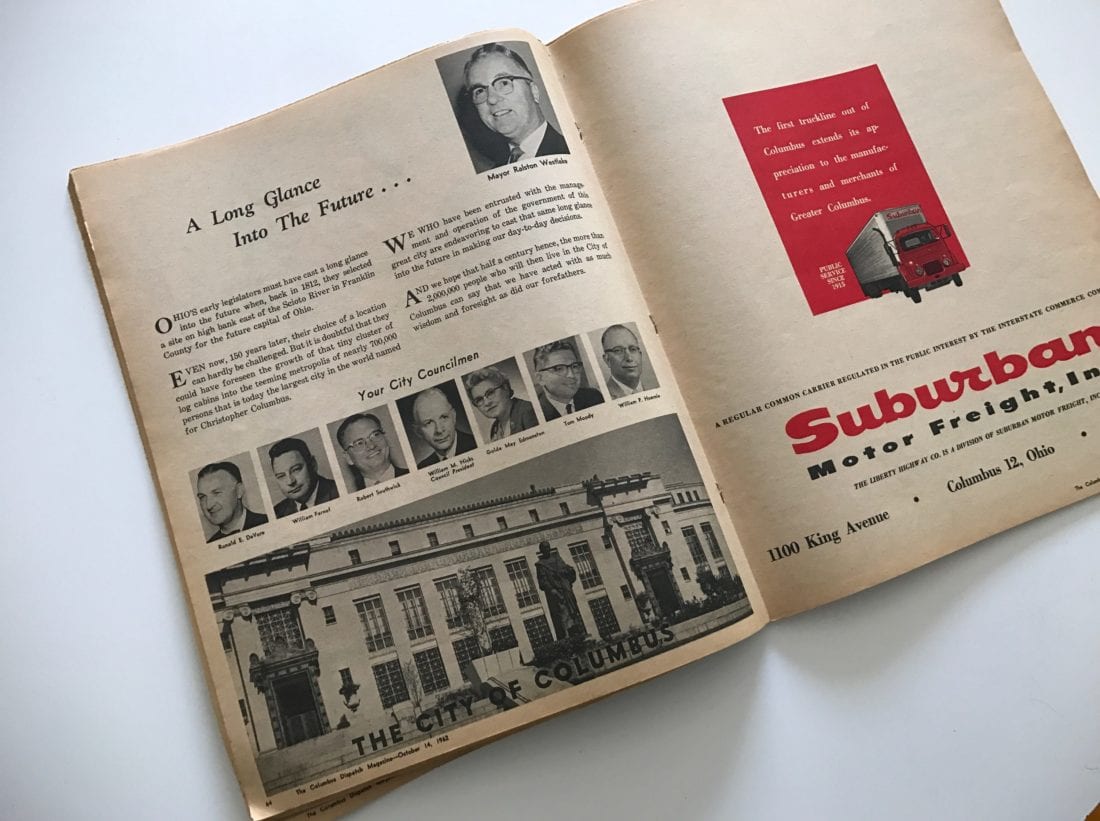 An ad from City Council stated that there were only 700,000 people living in Columbus at the time. This made our city the “largest city in the world named for Christopher Columbus.” Now, our city is home to over 850,000 residents, and we remain the largest city named for the man.

“And we hope that half a century hence, the more than 2,000,000 people that live in the City of Columbus can say that we have acted with as much wisdom and foresight as did our forefathers,” the ad continues to say.

Now, the City Council of 1962 might have been a little off with that estimation on how many people would be living in our city at this point. But I like to think that the people of Columbus are pretty happy to be here. 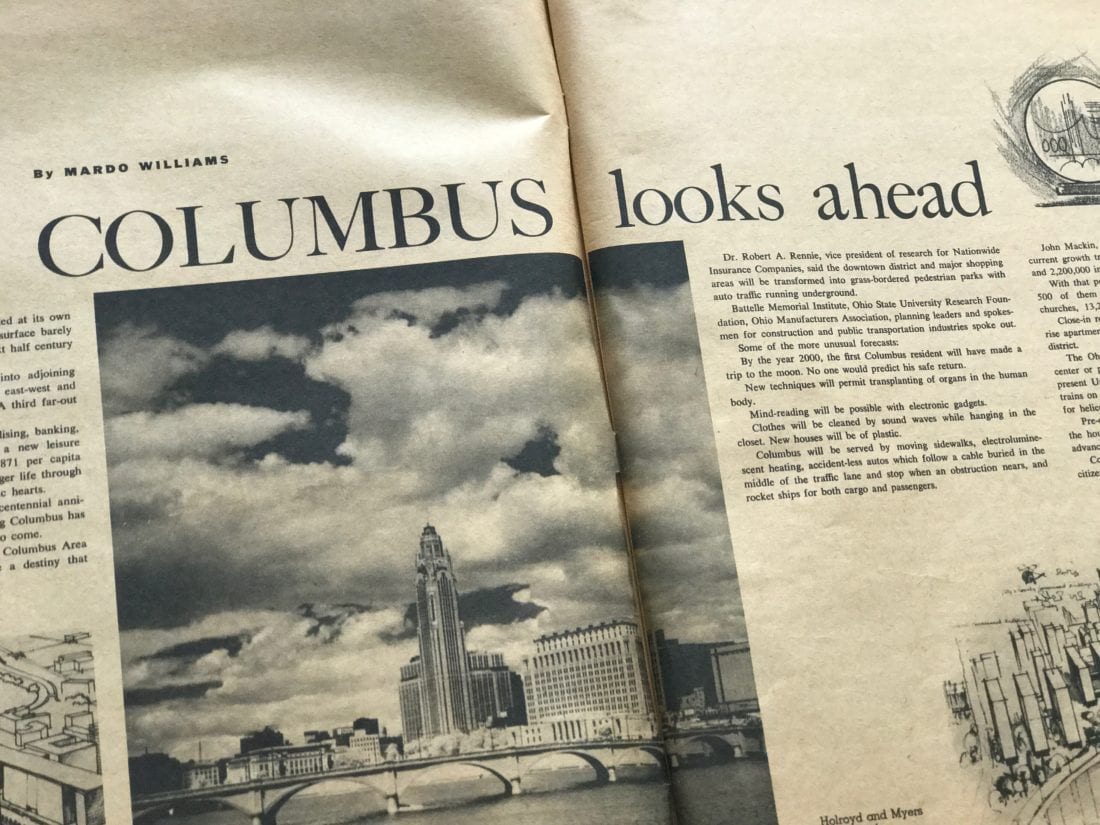 Since it was the city’s 150th birthday, The Dispatch was doing a lot of reflection and looking towards the future. In his article titled “Columbus looks ahead” writer Mardo Williams said, “…the surface barely has been scratched. The city will grow faster in the next half century than at any time in history.”

60 years later, Columbus is still growing. You can’t help but wonder what the future holds for our city.