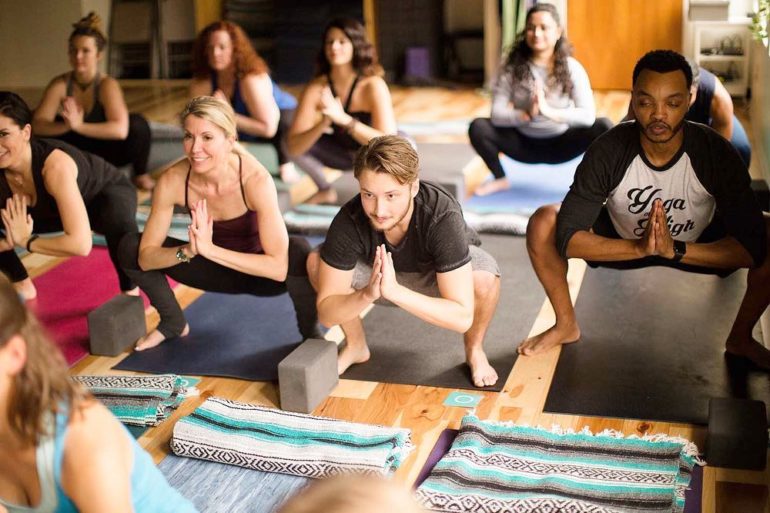 The Columbus Yoga Community Is Facing Facts And Creating Connections, One Inclusive Yoga Class At A Time

It’s time to say goodbye to the cliquey vibes of yoga and exercise in Columbus.

Studios are beginning to pay more attention to who their clientele is and the limited range of people that traditional yoga spaces bring in.

Ashton Colby, a yoga instructor RYT200, is part of a new initiative in Columbus to create inclusive and accessible yoga classes. For those that aren’t familiar with the RYT200 yogi term, it means that Ashton completed 200 hours of yoga teacher training.

Ashton found that in many yoga classes, they would use language particular to the women’s body or to the man’s body that he couldn’t connect with because he is transgender.

“It takes me out of my zone when we assume that bodies are just this way or that way,” he said.

Ashton teaches yoga at various studios around Columbus. I had the pleasure of attending his class as part of Stonewall Columbus’ “Beyond Binary” event. They hosted a series of events celebrating and acknowledging gender identity outside the binary identities of man, woman. In his class, he focuses on connecting with your body and breath and allowing each individual to practice in their own way. 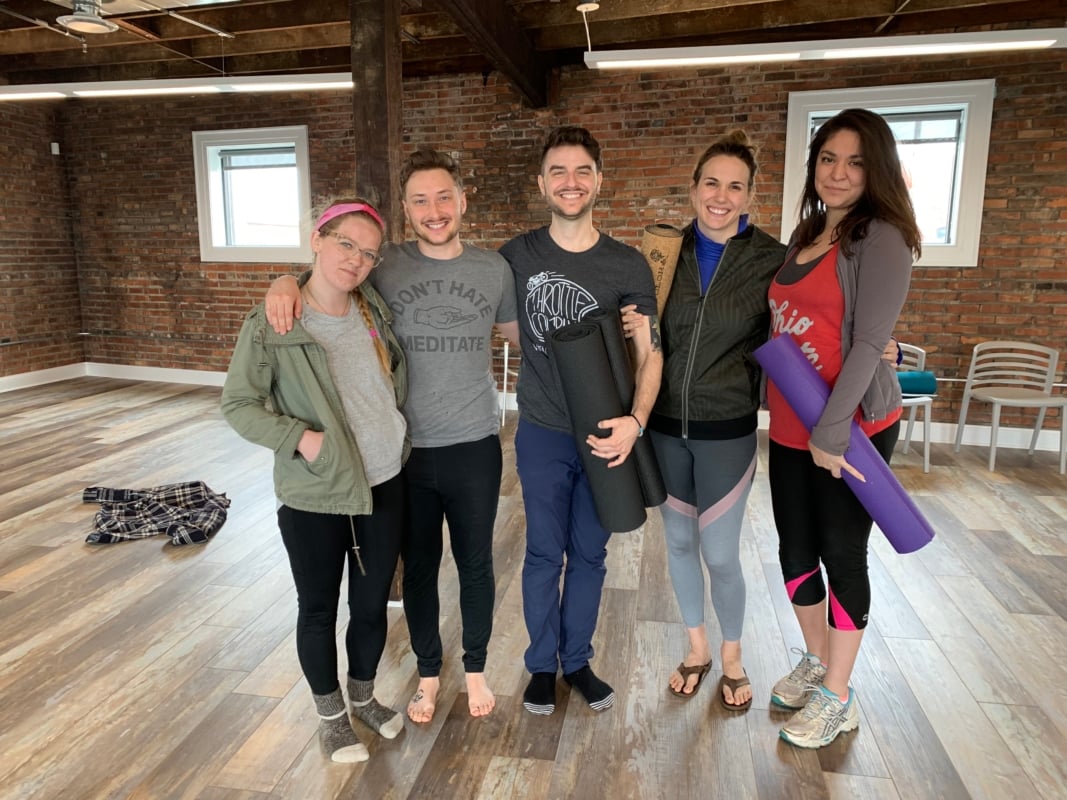 One of the classes that Ashton teaches regularly is Queer Yoga. The Queer Behavior organization here in Columbus hosts a series of Queer Yoga classes at various locations around town. These classes can be found at It Looks Like It’s Open studio and Art Outside The Lines, amongst others.

Ashton also teaches at Yoga on High, a studio that he says is making big strides toward inclusivity.

That feeling when your yoga studio is like a second home. @yogaonhigh 🙌🏠❤️

Ashton is one of the minority instructors that teaches the ABC Inclusive Yoga class. This class is every Saturday at 2 p.m. and it is free to the public. The teacher rotates but one of the most frequent teachers is the founder of the program, Sarah Dryer.

I attended this class and felt like it was the most interpersonal class I’ve ever taken. Every step of the way it was about you and your intentions.

My favorite part was the end during Shavasana (that’s the part where you lay down and do nothing and congratulate yourself for going to class). Sarah asked me if she could get me something for my head and I said “no thank you” and then she congratulated me on taking my practice into my hands. “Yes! No thank you!” she said. I’ve never smiled so big in a yoga class before. It was my time on the mat and I could do it however I wanted.

The rest of the class was fabulous too, of course. I left feeling refreshed and ready for the rest of my day, but that part really stuck with me. 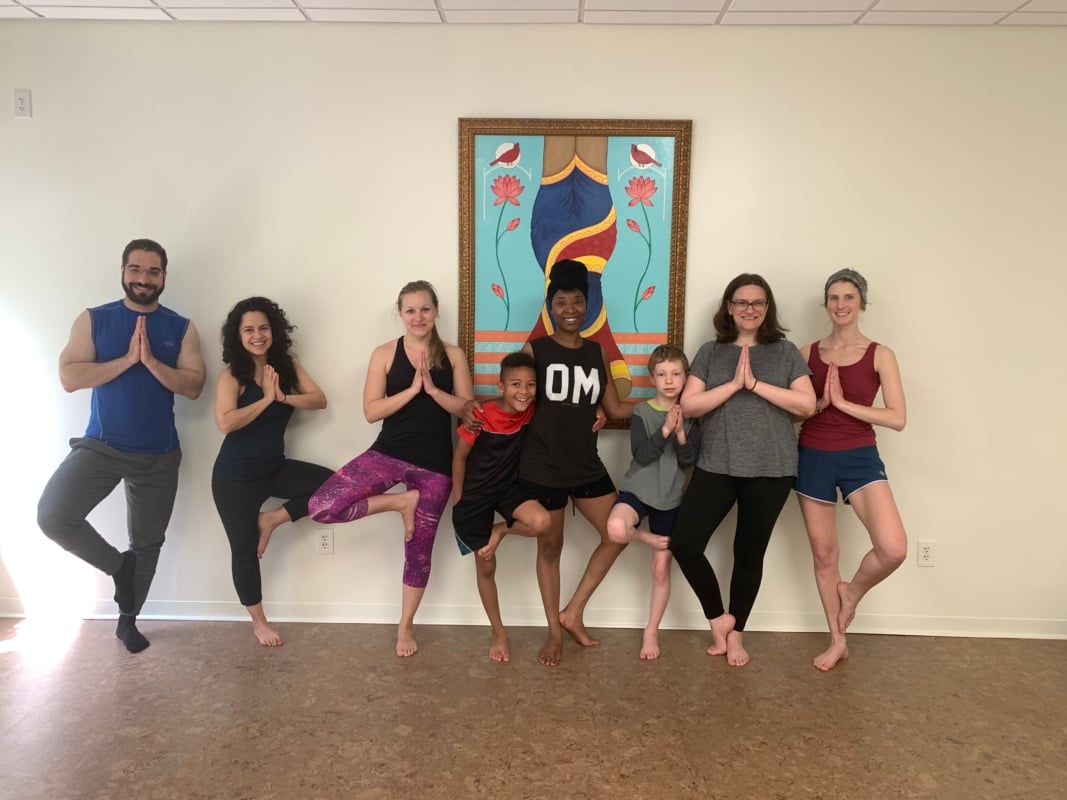 The ABC Inclusive Yoga class is one of the most recent additions to the studio’s efforts to be inclusive and accessible. The whole project began about a year ago when Sarah approached Yoga On High owner Michele Vinbury about not feeling like the studio was inclusive during her teacher training program.

When Sarah approached Michele she wasn’t expecting much to come out of it. She expected to express her opinions, thank her for being a mentor during her teacher training, and go about the rest of her life. Bust instead, Michele met her with enthusiasm about making the studio a better place.

Sarah started going to workshops on what it means to be black, a woman, a member of the LGBT+ community even though she already identified as those things. She said that just because she identified that way didn’t mean she had the right to tell others about their experience.

“I started going to workshops on the opposition of those movements,” Sarah added. “I started really understanding that if I wanted to be of service, I had to understand all sides in a way that no one else is investing time in doing.”

The first thing they did was hold a class on inclusive conversations. They did activities to talk about what it means to embrace your biases and know what your biases are.

“We talked about the fact that we can’t pretend we’re not bringing the outside world into the studio,” she said. “Yoga is the perfect fertile ground for empathy because we’re all coming here for peace anyway.”

They held multiple other seminars and classes over the months to talk about the fear of biases. One of their seminars included a lecture from Dr. Michele Winship about body image and intersectionality. The programs became very academic, allowing the yogis to continue to learn and grow and bring their practice to a more accessible level.

Yoga on High makes a conscious effort to hire people of color, various body types, and members of the LGBT+ community.

Soon Ashton approached the team about gender-inclusivity. Gender-neutral bathrooms were added to their space and he said this was a huge step for the studio and for Columbus in general.

The Yoga on High Foundation has tons of other programs revolving around inclusive and accessible yoga such as Yoga For Mental Health, Yoga for Amputees, and the Power of Transformation program for inmates.

Sarah said that the prison initiative gives these inmates a resource for their transition when they get out of prison. The teachers that they connect with while in prison will still be available when they get out.

“They have a home to continue to practice and teacher that are familiar,” Sarah said,

Yoga on High also offers many scholarships for their teacher training programs as well as pay-what-you-can class passes.

“I don’t think yoga should be a luxury,” Ashton said. “The people that need it most are the people who it’s probably harder to get access to.”

For Ashton, yoga is therapeutic. He is currently participating in trauma-sensitive yoga teacher training through Yoga on High.

“I’d love to see more studios in Columbus have a class like ABC Yoga,” he said. “We recognize that not everybody feels safe in a traditional yoga studio.”

Ashton said that taking an hour of the schedule to have an inclusive community class sends a big message to people who don’t feel like they have a space in a traditional yoga studio.

“What’s so beautiful about the city is that we try to make space for everybody,” he said.

Yoga isn’t the only form of movement in Columbus that’s making strides toward inclusivity.

Valerie Shrader is the CEO and Owner of Infinity Aerial. Valerie said that from day one her mission in her studio has been to create an inclusive and body-positive environment. She said that many people are nervous about trying aerial studios because many only feature young, physically fit people.

Valerie said that they work hard to ensure that everyone feels comfortable in the studio no matter their body type. She also said that many of her students identify as LGBTQ and they make a strong effort to make sure their studio is known as a safe space.

“If I’m doing something that can be healing and empowering and make you feel good about yourself then that should be for everybody, not just one specific group of people,” Valerie said.