How To Be An Anti-Racist In Columbus

Recent acts of racial violence, particularly police brutality, in our country have been the catalyst for protests in all 50 states. Across the United States, Americans are wondering how we can move forward and create real, systemic change. The deaths of George Floyd, Breonna Taylor, and Ahmaud Arbery, just like the deaths of so many before them, cannot go unchallenged.

Here in Ohio, thousands have taken to the streets to vocalize their anguish, disappointment, and frustration. Columbus Police Chief Tom Quinlan and Columbus Mayor Andrew Ginther have said on multiple occasions that there were “outside agitators” instigating violent situations, but arrest records show a different story. Most of the arrests reported during protests have been for non-violent minor offenses like failure to disperse and curfew violations.

It’s time for us to be actively anti-racist. Ibram X. Kendi wrote How to be an Antiracist last year, and if you haven’t read it yet, consider this your anti-racist homework assignment.

What is an anti-racist?

Being an anti-racist isn’t a one and done movement. Reading Kendi’s book won’t be the only step, it’s simply a good starting point. Anti-racism means listening, learning, and being an ally every single day.

According to the Anti-racism Digital Library, “Anti-racism can be defined as some form of focused and sustained action, which includes inter-cultural, inter-faith, multi-lingual and inter-abled (i.e. differently-abled) communities with the intent to change a system or institutional policy, practice, or procedure which has racist effects.”

Here’s how you can be an anti-racist in Columbus. 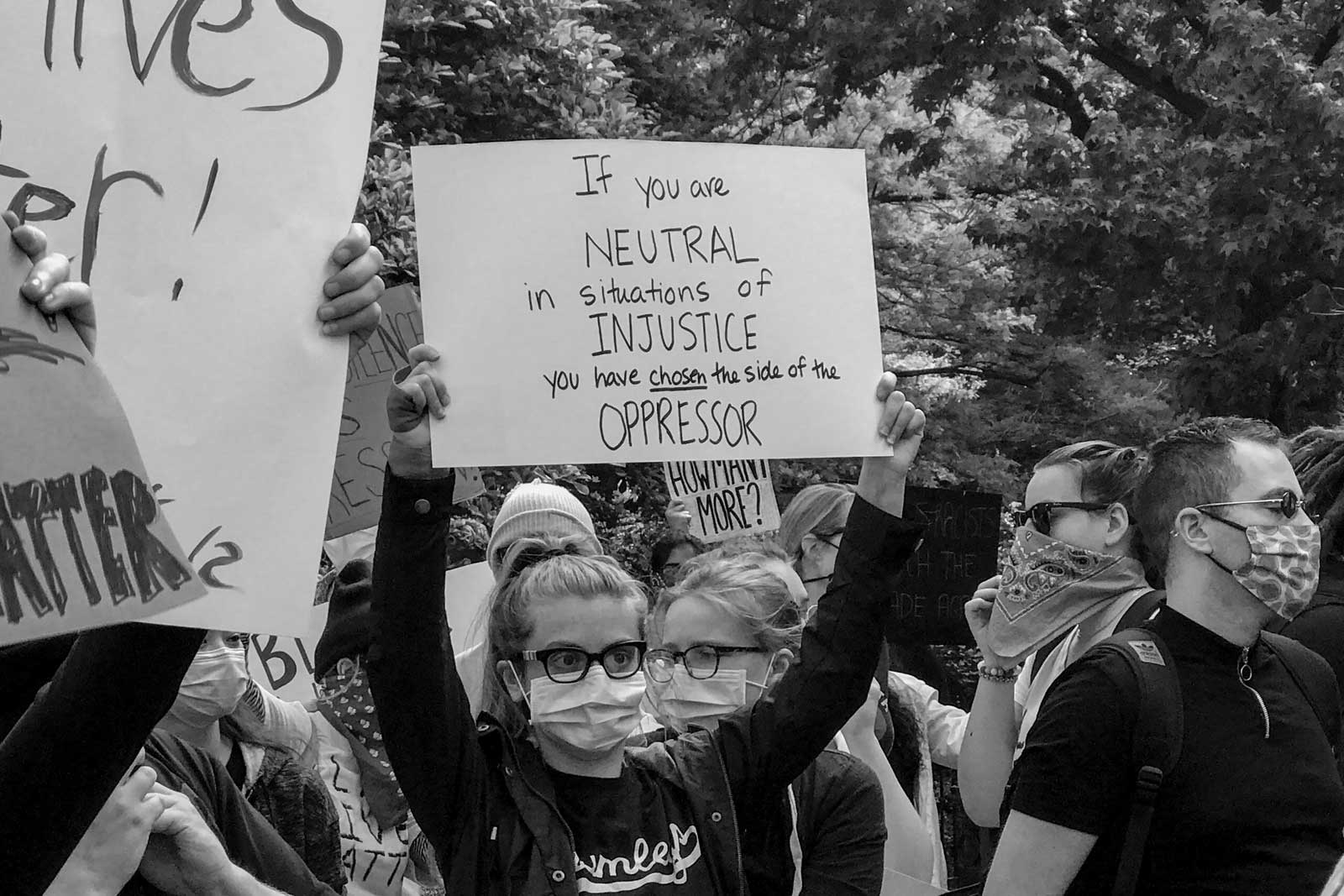 Take guidance from event organizers
It’s critically important that you’re communicating with your fellow protestors and demonstration organizers. Listen to black leaders and follow their lead.

Come with supplies
Bringing your own water, face mask, protective eyewear, protest signs, and clothes that can protect your skin from tear gas. Here’s a list of need-to-know safety info for protestors.

Know your rights
Your First Amendment right to peacefully protest is vital to the health of our democracy. To learn more about your protest rights, visit the ACLU of Ohio.

Take your health seriously
Standing up against systemic racism is incredibly important, but it’s imperative that protesters only participate if they’re not showing COVID-19 symptoms. Here are some guidelines you can follow to minimize your risk while protesting. We are still in the midst of a pandemic that is disproportionately affecting the black community, so think of it as one more thing you can do to be an ally.

Use Resources To Educate Yourself

It’s not the responsibility of people of color to educate white people about the devastating effects of white privilege, racism, and systemic injustice. There is no excuse not to take advantage of the multitude of books, articles, and online resources.

Organizations
The Kirwan Institute for the Study of Race and Ethnicity
The goal of the Kirwan Institute is to connect individuals and communities with opportunities needed for thriving by educating the public, building the capacity of allied social justice organizations, and investing in efforts that support equity and inclusion through research, engagement, and communication.

SURJ Ohio
Showing Up For Racial Justice- Ohio is a statewide organization including a network of groups and individuals working to undermine white support for white supremacy.

Reading Materials
A Resource Guide for Anti-Racism
For Our White Friends Trying to be Allies
How to Support the Struggle with Police Brutality
Anti-Racism Resources
75 Things White People Can do for Racial Justice
Books to Read to Educate Yourself About Anti-Racism and Race
The Other Columbus: Anti-racism work is supposed to be hard
The 1619 Project (all articles)
Additional Anti-Racism Resources

We put together a list of black-owned businesses around Columbus with the help of community suggestions (seriously, your emails and suggestions were so fantastic) and great resources like the Central Ohio African American Chamber of Commerce. The list has a wide variety of businesses in various Central Ohio neighborhoods.

Don’t be afraid to start the conversation
It’s important to use your voice to speak to others openly about why racial justice is necessary. The discomfort is real, but there’s a freedom in acknowledging your prejudices.

Call out racist behavior
Friends, family, strangers, it doesn’t matter. No one should get a free pass to say or do racist things. Consider every opportunity a chance to help educate others and to help take the emotional burden off people of color.

Pat attention to your local leaders of color
Local groups are doing a lot of work to be seen and heard. Join the groups that are in the fight, support them with donations and your time, and find ways to elevate the black community.

Here’s a list of local, state, and federal representatives who you can call and put pressure on to enact real, meaningful change.

When calling, 8 Can’t Wait is a great guideline for demanding change. 8 Can’t Wait is a movement organized by Campaign Zero that explains 8 common-sense use of force reforms. You can check out their suggested phone script for calling Mayor Ginther right here.