I will be the first to admit that I’m not a huge fan of Hallmark movies. That being said, I really did try to go into this with an open mind. I heard about this movie from a friend of mine who assured me that I would love it.

Lesley James Is Stepping Down As Program Director At CD102.5

#Instafamous: 8 Of The Most Used Instagram Hashtags In Columbus Plus Tips To Get The Perfect Shot

The movie in question is called Forever In My Heart, and the premise sounded promising so I decided to give it a go.

Jenna and Charlie found love in Ireland but their dreams drove them apart. Five years later, they reunite and Jenna has to decide where her heart belongs—back home in Ohio or in the Emerald Isle.

I knew I’d be in for some bad Irish accents and a very “Do I follow my dreams or give them up for this simple, salt of the earth man” plotline, but I truly wasn’t prepared. But hey, like the title says, I watched it so you wouldn’t have to, and now I’m going to tell you all about it. So get cozy kids, we’re about to go on an adventure.

The movie kicks off in small town Ireland. Our heroine, Jenna, finds herself on her last day of a year long internship at O’Hanlons inn, a mom-and-pop style establishment full of stereotypical Irish charm. Leprechauns are mentioned within the first 5 minutes. Jenna’s Irish boyfriend, Charlie, is a musician, and he’s planned a going away party that includes an extremely sappy indoor Irish hoe down. It goes on for about 30 seconds longer than it should, but If I’m being honest, it was a catchy song and I was sort of into it.

We can’t have a Hallmark romance movie without a little conflict, so we soon find out that Charlie’s band will be heading out on tour while Jenna is headed back to Ohio where her dream job awaits. Like all good midwestern girls, Jenna isn’t just some girly girl, she knows how to use a hammer, and she proves her handy skills by hanging one photo on the wall. She’s so modern.

After a weirdly unsentimental goodbye hug to Ireland after Charlie came super close to proposing, we get our first, glorius shot of Columbus.

It’s drone B-Roll, but the Scioto Mile looks fresh, so I’ll allow it. Now, Jenna is working at a hotel I can only assume is fictionally set in the Short North, because it looks super swanky. Jenna somehow knows that a random guest is from Ireland, even though he doesn’t have an Irish accent. Let’s just blame it on movie magic. It tells us that even after all of these years (30 seconds for viewers) Jenna still has Ireland on her mind.

In true Columbus fashion, Jenna leaves her door unlocked at her apartment, which is again shown after a vague sunset shot of the Scioto Mile. At her apartment, her boyfriend/boss tells her that they want her to expand their hotel chain over in Ireland, where she’ll be negotiating the purchase of a property in Dublin.

Her Ohio boyfriend/boss then proposes and tells her that he already bought her plane ticket to Ireland, so it’s a good thing she accepts the job! Nothing paints a more generous portrait of Columbus men than showing that they are super controlling of their female employees.

In the middle of his proposal, he answers his phone, which I feel like pretty much confirms what we already know, that he’s going to get tossed aside like the big city trash he is for her Irish country boy in approximately 30 minutes. Just like that, Jenna is whisked out of her humdrum life in Columbus on a stock footage airplane and now she’s in Ireland.

I’m not going to spoil the entire plot just in case you decide to give it a go, but let’s just say, old romances are rekindled, there’s a good old fashioned food fight, and Ohio loses to Ireland. 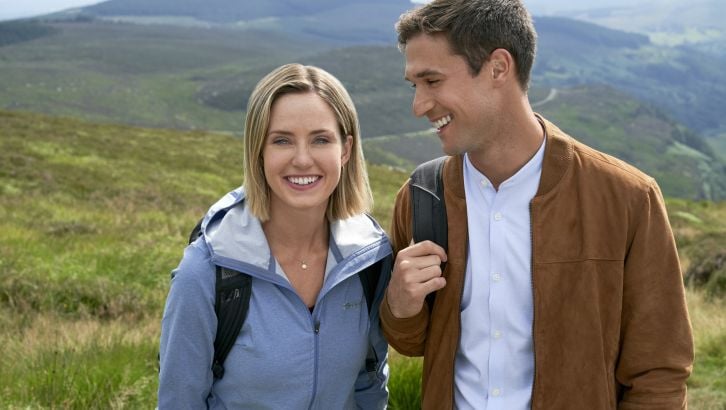 The movie may have played into some major stereotypes, but I have to say, it was rather refreshing to see Columbus portrayed as a corporate mecca instead of some forgotten country town.

If you want to check out Forever in my Heart for yourself, you can catch it on the Hallmark Channel, or online through their subscription service.