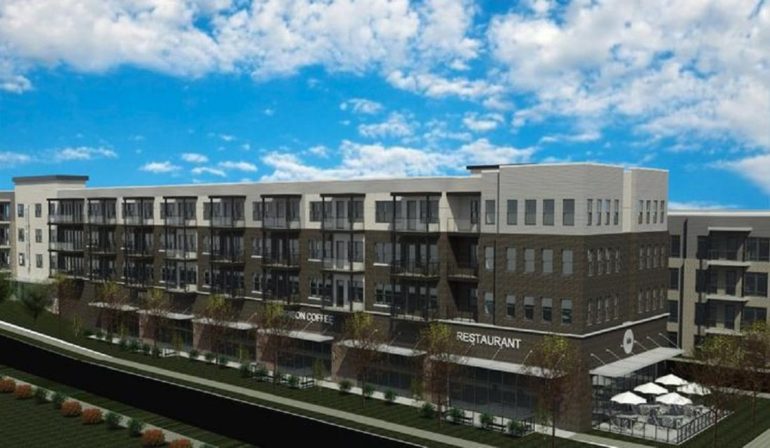 Every once in a while, a new development is announced in Columbus that seems great initially, only to see a steady degradation of design, materials, urban qualities – or all of the above – with each new iteration. That seems to be the case with the Harrison West development recently given the moniker of Founders Park.

The development site in question is located on the far western edge of Harrison West, bounded by Perry Street, 3rd and 5th Avenues, and the Olentangy River. This particular site has had several different configurations over the years. Until 1970, almost all of this land was just an extension of Harrison West’s residential district, full of single-family homes dating back to the turn of the last century. That year, a few dozen homes closest to 5th Avenue were bulldozed for a modest surface parking lot for Battelle Memorial Institute, a move that would be treated as heresy in what has become part of Columbus’ premier urban zone making up the greater Short North, of which Harrison West is now considered a part of. Unfortunately, that was just the beginning. Over the next 20 years, more homes were lost one by one until they had disappeared completely. The demolitions were largely done at the request of Battelle Memorial Institute, which gradually purchased the land. By the mid-2000s, the entire northern half of the site had become a giant surface parking lot for its employees, where even the old street grid was lost.

Fast-forward another decade and Battelle had changed its mind on the value of the land. At the time of the proposed sale of the land to developers in 2016, Patrick Jarvis, Battelle’s senior vice president of marketing and communications said, with apparently no hint of irony, that “Our goal has been to bring this piece of underutilized land to what it was: mostly residential way back when.”

Wagenbrenner, a developer that had seen other projects in the area- most prominently the The Hub at Hubbard and High, and Jeffrey Park- was mentioned early on as the probable developer. Slane Company, a Gahanna-based developer, was also in talks at the time, and went so far as to release its initial proposal idea in October 2016. It included a hotel on the northwestern corner along 5th Avenue, senior and assisted-living apartments just to the east, and market-rate apartments and a 3.5 acre park just to the south. Battelle ultimately rejected this proposal, likely because it seemed to miss the entire point of what they originally wanted- housing for a younger demographic that could live and work there. Still, when Wagenbrenner became the chosen developer, their own initial rendering included some of the elements of Slane’s, including the same location for a hotel and some senior living apartments on the northern section. The differences included more market-rate apartments, a new parking garage, office space, single-family homes, a riverfront park and retail space for a grocery store and potentially a restaurant or two.

This first Wagenbrenner rendering largely received a positive reaction. While certainly not the most dense of plans, especially in the southern half, it was largely faithful to urban development characteristics- no setbacks from the main streets, parking hidden behind buildings, multi-story elements and a mixed-use configuration. The city quickly stepped in with an incentives package in early 2017 for the project. Then little news emerged for the next year until a new rendering for an updated project came out in March 2018, and with it the problems began.

While initial renderings and plans should never be taken as gospel, the changes were more significant than usual. The hotel element that had fronted 5th Avenue was now significantly set back, with a large surface parking lot now located in front. The garage from the first rendering, which had been hidden by a retail building, was now fronting 5th Avenue and the retail element removed entirely. More surface parking had been maintained along the remainder of 5th, as the apartments had been reoriented north-south away from the street rather than running along it. These changes merely maintained the large dead space along 5th that Battelle’s surface parking lot had for years previously. In addition, the number of residential units had dropped. The design of the buildings was less than spectacular as well, with a bland, boxy feel in tones of gray and beige.

By June of this year, a few positive changes arrived: A 12,000 square foot retail element had been added along 5th Avenue adjacent to the senior apartments, which had removed some of the surface parking along the street, and about 40 market-rate apartments were added to the project. But the proposal overall continued to get worse, with yet more green space added between the apartments and single-family homes, creating an ever-more suburban layout.

Just last week, we were treated to what is likely to be the final iteration before construction begins sometime before the end of the year.

The materials look cheap and unattractive, and the overall characterless massing leads one to imagine a mix of Soviet-era housing and 1990’s outpatient clinic. Something shouldn’t look so dated before it’s even built. Even the name- Founders Park- brings to mind not a vibrant urban community, but rather a portly mayor of a dying village announcing the construction of a new gazebo in the local square. The promise and potential of such a prominent piece of land in a great neighborhood is being squandered, and that’s a real shame. Wagenbrenner has done some great work, but this is a massive misfire. Whether this was entirely the result of their team, or a collaborative effort with their mostly suburban-oriented partners, it speaks to the unfortunate and all-too-common trend of vast inconsistency in Columbus’ urban development. For every fantastic project from top to bottom, there comes along far more messes like this. There may be a learning curve for some developers who previously focused on Hilliard or Grove City, but by now, Wagenbrenner should know better than this.