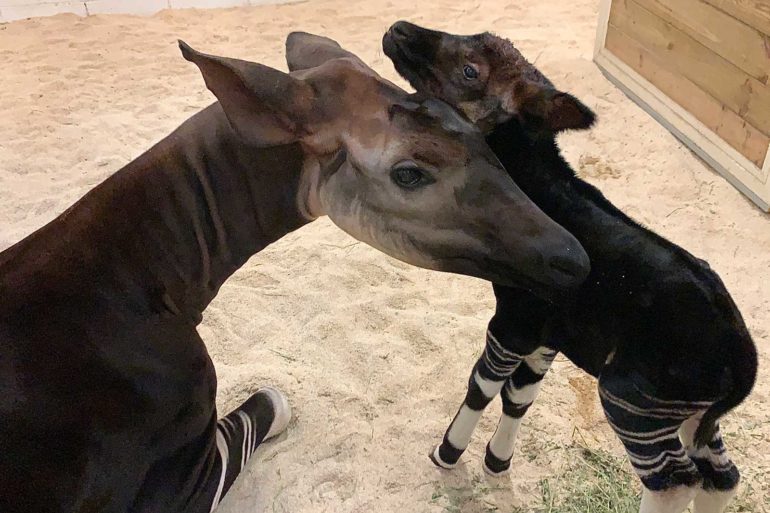 The Columbus Zoo and Aquarium is celebrating yet another adorable birth. This time, it’s mom Damisi and dad El Jewar who have welcomed their new male okapi calf. Damisi is an experienced mom and she’s done a great job of caring for her new babe since he was born on May 8.

Okapi calves can’t control their own body temperatures, so for the next few months, Damisi and the baby will stay in a temperature-controlled environment behind the scenes so he can grow safely.

Damisi and El Jewar were a recommended pairing from the Species Survival Plan, a program coordinated by the Association of Zoos and Aquariums to maintain the genetic diversity of threatened and endangered species in human care.

“The birth of this calf is very special as this incredible species continues to face many challenges in its native range. The Columbus Zoo remains dedicated to saving wildlife and wild places, and we are proud to be a part of this managed breeding program and other conservation initiatives working to protect okapis,” said Columbus Zoo and Aquarium President/CEO Tom Stalf.

Habitat loss and deforestation, as well as poaching and previous civil unrest in the okapis’ range, have resulted in declining populations of this species, which is found only in forests of northeastern Democratic Republic of Congo (DRC).

Okapis are uniquely adorable, with large, upright ears, an elongated neck, and striped hindquarters. Although it shares that camouflaging pattern with zebras, the okapi is actually a relative of the giraffe.

Okapis are highly elusive and mostly solitary, and up until the end of the 1800s and beginning of the 20th century, the species was unknown to the scientific community. While the okapi became protected in 1933 in the DRC, where it is a national and cultural symbol, recent research found that increased human activities have resulted in the okapi population plummeting by over 50 percent in just three generations for this species (24 years). The total number of okapis remains uncertain, but scientists estimate that only between 35,000 and 50,000 remain, with some researchers estimating the population to consist of even fewer individuals.

The Columbus Zoo has been a long-time supporter of the Okapi Conservation Project working in the DRC to help protect the okapi through habitat preservation and community-based initiatives that benefit the okapi, as well as the people with whom they share the forests and its resources.

“Researchers continue to learn more about this species every day, and as this calf grows, we, too, expand on knowledge of these animals. Through these collaborative efforts, our guests’ support and the involvement of communities living within okapis’ native range, all of us can play a big role in helping to protect them. We are very excited to welcome this adorable okapi calf, as he represents that hope for his species’ future,” said Audra Meinelt, curator of the Columbus Zoo’s Congo Expedition region.

The Columbus Zoo is following federal, state, and local guidelines to currently remain closed to the public to help reduce the spread of coronavirus (COVID-19) within the community, but you can get regular updates about the animals living there through social media.

Welcome to the world, little guy. We can’t wait to watch you grow up!