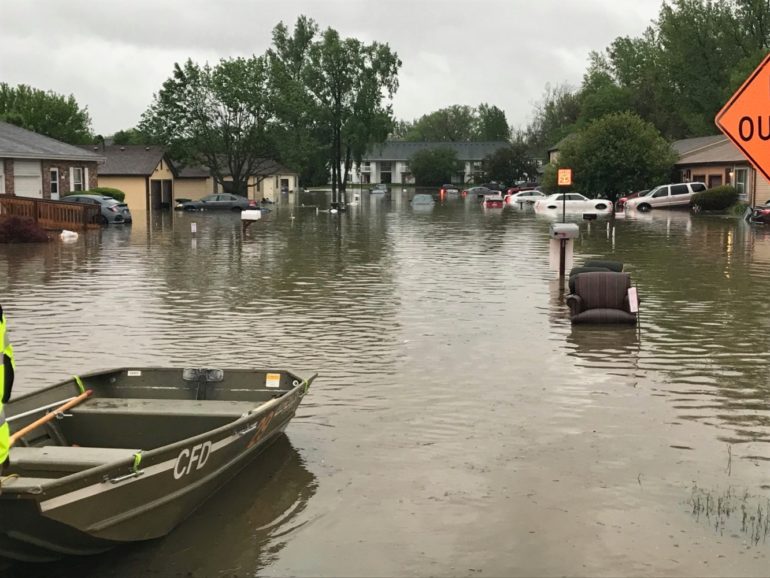 As record-breaking rainfall begins to wind down, residents around the city are now fighting the effects of historic flooding while a pandemic is ongoing. The floodwaters have begun to recede and the worst of the storm has passed, but more rain is expected to continue throughout the week.

The deluge started Monday and continued throughout Tuesday morning, smashing previous records and leaving damage in its wake.

To fight the surge of water, the Columbus Department of Public Utilities activated the floodwall on the city’s south side. According to CPD’s traffic unit, the city has activated or partially activated the Greenlawn Floodwall twice in the past four years.

The floodgate at Greenlawn Avenue is fit together piece by piece, with crews building the wall to prevent floodwaters from the Scioto River crossing into Franklinton, a neighborhood with a deadly history of flooding.

🚨Closures likely to remain in place overnight & into tomorrow https://t.co/I1qumQYh5Q

The Columbus Division of Fire was dispatched to Stormcroft Ave. to help with early morning evacuations on Tuesday. Residents were moved through waist-high water from their flooded homes to higher ground via boats. The American Red Cross was on hand to help them find temporary shelter in hotels, as well as to help with the recovery process.

By early Tuesday morning, Columbus had surpassed the daily rainfall record for May 19 with 1.5 inches, beating the previous record of 1.49 inches set in 2017.

The damage was widespread around Central Ohio. From road closures to flooded basements, residents in Bexley, Westerville, Worthington, and Clintonville reported major issues. Delaware, in particular, faced damage to businesses and homes.

Two months ago, many Central Ohio residents were facing the same daunting task of cleaning up after another heavy rainfall event. Many blame the City of Columbus and the sewer system that’s in place. But a representative from Columbus Public Utilities told Fox28 that no sewer system would be able to handle five inches of rain in one night. He said the city received 4,000 calls in March during the previous rain event and that work to the city’s sewer system is ongoing.

For information about Flood Relief through the American Red Cross, you can visit their website here.