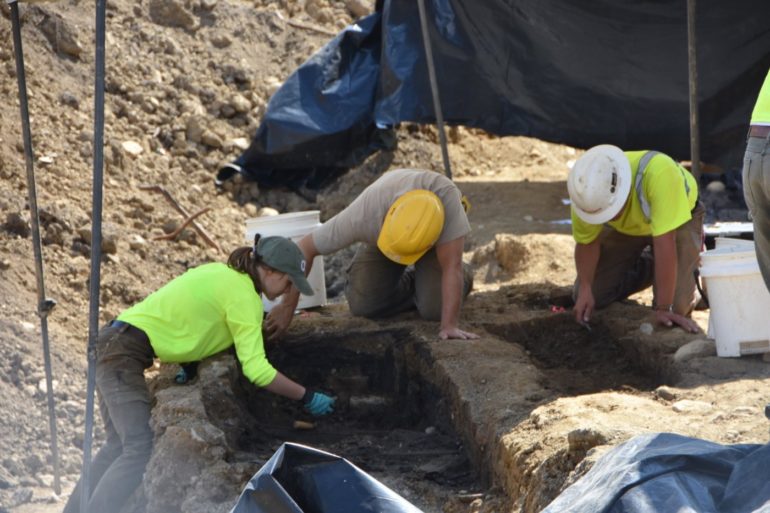 It felt like a sanctuary. Tall hardwoods, tilled fields, small homes laid out in an orderly fashion. It was, in fact, a sanctuary and a village.

He was tall, fit and had an air of confidence that was comforting. Pleasant Litchford had achieved the unimaginable: he had liberated himself and his family from enslavement. Leaving Lynchburg, Virginia around 1828, he crossed the Ohio and made his way through the dense wilderness toward a small town located north of the confluence of the Scioto and Olentangy Rivers. Litchford was a blacksmith. His skills were in great demand, especially in a growing frontier town like Franklinton.

As a black family, Franklinton would not be welcoming, but Perry Township, north of Franklinton offered possibilities. Litchford sank roots there. He bought large tracts of land, farmed, provided blacksmith services and thought about the future. He not only trained his sons as blacksmiths, but he built the first school for African American children in the state. He also laid out a cemetery on his land as black Americans could not be buried in most churchyards. Litchford was respected and well known. He was a friend of William Neil – of Neil House Fame (1).

Litchford would be forgotten and his contributions swept under the rug. Perry Township would be developed by Ben & King Thompson as an elite enclave for wealthy white people called Upper Arlington (there is no lower Arlington). Its also referred to as “The Country Club District”. We had a “Sundown Law” which made it illegal for non-white people to be here after dark unless they were here as part of their job. Additionally, we had deed restrictions that could be imposed to limit the right to buy a particular property to whites only. It was effectively enforced by an association.

“Written into the deeds were restrictions, made to be in effect until 1999, stating that no home could be sold or occupied by ‘any person or persons in whole or part of the Negro race or blood’ but people not of the white race could be employed as servants.” (Patricia Burgess in her book “Planning for the Private Interest”).

She was about 14, around 5’4″ tall and slender. Her death was unexpected and tragic. Her grieving mother tucked her favorite comb and brush into the pocket of the dress she was wearing as she laid in her wooden coffin. It was the last act of care her mother would be able to perform directly for her. When they shut the coffin to carry her to Litchford’s cemetery, her mother wept as she took one last look at her little girl’s face through the glass window on the lid. She found a little comfort in knowing that someday she and her husband would once again be side by side with their daughter for eternity.

It was just an empty field. The kids in Arlington played in it. Some even hunted. There was a little graveyard. A family plot overgrown with weeds like the rest of the field. Two maybe three headstones. A few were laying in a pile back in a wood stand.

In 1955 the community had outgrown the old High School. It was a beautiful place that had the feel of an olde English manor. It would be kept for lower grades and a new school built on the old empty field. The survey turned up an old cemetery. $1500 bought the old family graveyard. A “Negro Grave Yard”. It was inconveniently located right where the new school would be erected. For $5000 a contractor agreed relocate the graves. Sometimes contractors would “relocate” a cemetery by just relocating the headstones. This contractor just dug around with a backhoe – pulling up buckets with human bones, torn clothing and shards of shattered wooden caskets.

The human remains were dumped into boxes the size of a footlocker – referred to as “Turkey Roasters”. The bodies were ripped apart by the backhoe and the remains of the earliest residents were dumped together, much like the trash behind a butcher’s shop. One bucket had rags hanging out that were a part of a uniform – a Union Army Uniform. “This is a negro graveyard. That’s not a military uniform, its got to be a bell boys uniform”. The uniform and parts of the veteran who had helped win America from slavery were dumped into a turkey roaster.

It was trucked off with the rest and staged in a common excavation in the back of Union Cemetery. There were supposed to be only 10 graves. The contractor dug up more than 20 graves. Twice the amount they contracted for. It was good enough. The high school went up. She was left under the parking lot with others. No one knew she was there – and it wasn’t a concern. Kim Starr grew up across the street.

She like so many others, including all of my family have walked over her grave as have thousands of others. Decades later, Kim came across an old map while looking for cemeteries in Upper Arlington. She saw “negro cemetery” marked. Kim and her childhood friend Diane Runyon began researching the topic. What started out as a casual inquiry turned into a mission. Diane’s skill as a genealogist unraveled more of the mystery. Kim and Diane realized what had happened.

The city was unresponsive and dismissed their concerns that there were literally bodies under the parking lot and possibly the building.

So they did the most powerful thing they could think of – they wrote a book about it: “Secrets Under the Parking Lot”. The city engaged in all the old-time tricks to keep the issue quiet. The library would not shelve the book. When they wanted to hold a book signing – they could only do it in the parking lot of the library. In winter.

The issue was one of concern as the city planned to tear down the high school and build a new one. This could be a problem if there were historic graves.

I met Kim and Diane in the MCL Cafeteria.

It was one of those times when you meet strangers that feel like old friends. As it turns out, Diane is a relative of mine. Her people are from Ireland (all Irish are of the same family). She is understated but has that fighting spirit that we Irish are born with. Kim has the gift of being relentless in the most inoffensive way. Modest and polite, but has a will of iron. I was grateful to have become connected with them.

We had talked about Geophysics and I followed up with a call to the school board. I left a message saying that myself and a fellow geologist would be running Ground Penetrating Radar over the parking lot at the school and that we would be releasing our results to the media. I got a callback and was assured my efforts were not needed. They would have an archaeological firm run such tests. Another professional ally of Diane & Kim is an archaeologist with a powerful resume who is a recognized authority in the state. Moreover, his wife is a forensic anthropologist with a Ph.D. and a lecturer at a renowned university. (I have omitted their names out of respect for their privacy). Kim and Diane made good use of these resources.

The city had doubts that Kim and Diane were right. They hoped that it would just be a few grand and that the ground-penetrating radar survey would reveal nothing. Instead, it suggested that Diane and Kim were right. Excavation began.

Kim contacted me and said I needed to come to the site. When I arrived I met the archaeologist and we chatted. He is a fellow motorcyclist and cool in the way that only scientists can be. Then Kim showed her to me. The coffin had long ago collapsed and decayed away. The glass now lay as a fractured veil over her young face. Her comb and hairbrush were at her side. The archaeologists found her sleeping about 3 feet below the surface. She is now laying on a soil pedestal created by excavating around her. Kim handed me the geophysical reports to take home and read.

The archaeology was beautiful – but I saw her for what she was: a child. I put the reports in the saddlebags of my motorcycle said my goodbyes. I would have loved to hang out and talk, but quite frankly, I didn’t want to risk showing too much emotion and was happy to pull my aviator goggles over my eyes.

I was on site this morning. Kim and the archaeologist were there. So were a crowd of local citizens – sitting in lawn chairs watching the dig. Someone had laid flowers in front of the fence around the dig. A descendant of Pleasant Litchford was there as well.

To me this is not about archaeology or local politics. It’s about a lost child (2). Because of the brilliance, ethics and devotion of two mothers, she has been found and rescued. The Irish can both see Angels and hear the dead speak. As I fired up the engine of my motorcycle I heard/felt her say: “I am not alone”. I can only imagine what she has said to the Mothers who rescued her. (3)