Did I Find The Best Pizza In Columbus?

Pizza is one of those things that everyone seems to love. I mean, even bad pizza is good, amiright?

That being said, we all have preferences, and I happen to love Columbus-style pizza. I was born and raised here, and to me, pizza means edge-to-edge toppings, a thin and crispy crust, and a delightful square cut. There are people out there that prefer a thick crust, or a large foldable NY style slice, or even a Chicago style deep dish crust, but those people are wrong.

And one pizza joint kept getting mentioned.

Apparently it was really good. It had been around for 60 years. It was voted as the “best pizza in Columbus” by this group of self-proclaimed pizza connoisseurs for the past two years.

And you guys – I had never even heard of it!

I have lived in the North end of Columbus my entire life, and not once had I heard of Terita’s Pizza. 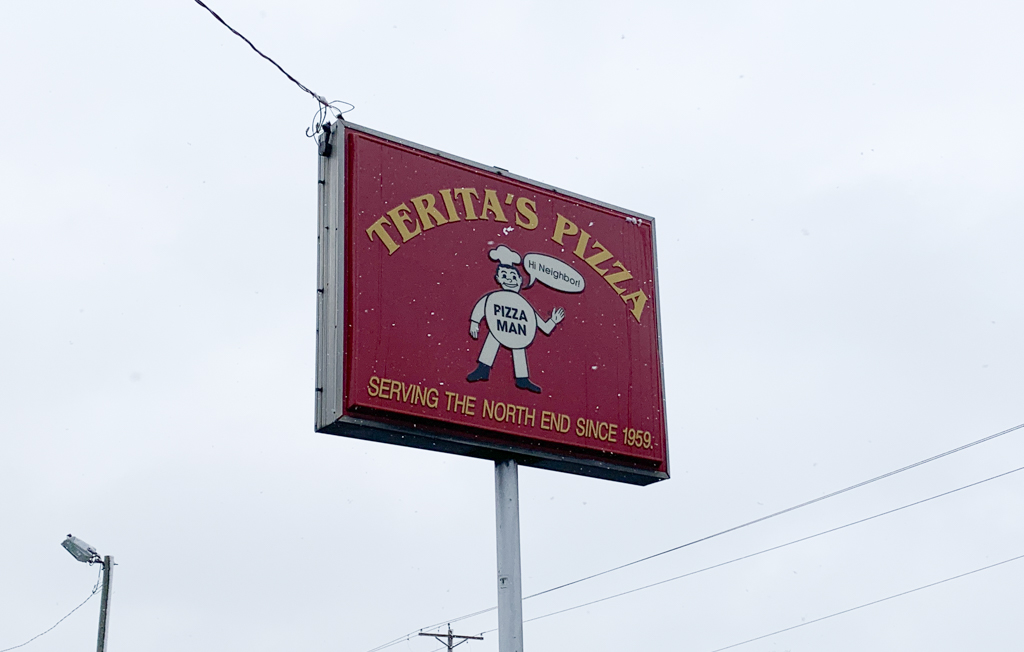 Terita’s has a cult-like following.

There are 400+ 5-star Google reviews. Many of the reviews mention people driving an hour EACH WAY to pick up some pizza.

So I piled my family into the car and took off to try the best pizza in Columbus.

Terita’s is definitely a mom and pop shop.

There’s nothing fancy or pretentious about it, and they keep things simple. In addition to pizza, you’ll find spaghetti and meatballs, a small variety of subs, wings, and side salads on their menu.

Here’s what you should know:

Terita’s is only open from 4-11pm daily. It’s not open for lunch. Also, you can’t dine in, and they do not offer pizza delivery. (I did see some signage for Doordash, so third-party delivery may be an option.)

I had heard about their high-quality ingredients and was especially excited to taste their Italian sausage, which they grind in house. My seven-year-old is a bit of a purist, so I also knew we’d have to get a basic pepperoni pizza for her.

We walked into the small shop and were immediately greeted warmly. We looked over the menu and ordered a pepperoni pizza and a “Terita’s Special” – which included pepperoni, homemade sausage, mushrooms, green peppers, and onion.

My little one was offered a pretzel stick, and the guy who took our order mentioned that they’ve been offering pretzels for the past 60 years.

How do you say no to a pretzel stick?

We waited about 15 minutes for our pizzas to be made. And to my husband’s dismay, I asked about a million questions while we waited. He’s a bit of an introvert…

The pizza shop was opened in 1959 by Gus Iannarino. Gus insisted on one thing – using the very best ingredients. His son, Tom Iannarino runs the shop now, as committed to quality ingredients as his father.

I asked where the name “Terita’s” came from and learned that Gus decided on that name by taking the first few letters of his daughters’ names (Teri and Marita) and putting them together.

It was fun watching the pizzas go into the conveyor oven and slowly come out the other side. When it was our turn, I was basically drooling. I’m pretty sure all three of us were mesmerized by the “magic”.

Oh, man. The pepperoni on the pizza was just how I like it – small, and curled up into little cups of heaven. Yum.

And the Terita’s Special was loaded…and I mean loaded with toppings. Guys, this is exactly how I like my pizza. So many toppings that you can’t even find the crust.

I thanked the guy that was helping me and paused to ask him how long he’d been working at Terita’s since he knew all the answers to my questions.

He smiled and said he’d been working at Terita’s for 41 years.

Turns out, he grew up next door to Gus Iannarino, and asked him for a job when he was in kindergarten. I can’t even. How perfect is that?

And with that, we grabbed our pizza and headed to the car.

The boxes felt heavy. I am not kidding when I say the pizzas are absolutely loaded with toppings.

And here’s the part that totally sucks: My husband is one of those weirdos who doesn’t like us eating in the car. Some nonsense about how opening the box makes the pizza get cold faster, and about us dropping pizza toppings all over the car and wiping red sauce on his upholstery.

But I did manage to snag a piece of sausage out of the box before he promptly batted it shut.

And it was delicious.

Totally worth the hype.

The pizza was still hot by the time we got home (maybe my husband’s actually on to something?) and it was really good. The sauce was on the sweeter side, and the toppings all tasted fresh. I absolutely loved their homemade sausage and the pepperoni had a nice spicy kick to it.

And while the crust wasn’t cracker thin, it still had a nice crunch to it and stood up well to all the toppings.

So tell me – am I the only one who’d never heard of Terita’s? And if you’ve sampled the goods – do you agree that it’s the best pizza in Columbus?

Malini was born and raised in Worthington, OH and is obsessed with all things FOOD + TRAVEL. Her life goals include inspiring people to go on all kinds of adventures. She's a wife and mom, but mostly, she's hungry. You can follow along with her food and travel adventures on her blog, lakesandlattes.com

View all posts by Malini Swank