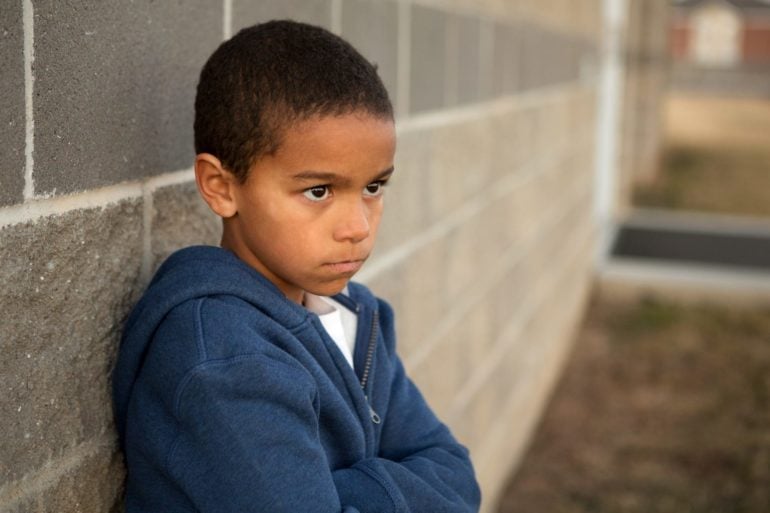 The reality of a zero tolerance education is often one of preemptive defeat.

I remember being a teenager, sitting in a crowded auditorium, shoulder to shoulder with other students staring blankly at a stage occupied by staff and faculty. The principal or some other faceless speaker addressed the student body. “Look to your left,” the speaker said. We’d comply. “Now look to your right.” Again, compliance. “One of the people on either side of you will one day find themselves incarcerated.” We all looked at each other, unmoved and unresponsive and looked back at the speaker, bored and a little anxious. It wasn’t the first time I was gathered into a crowded room with other students and made to do that exact same exercise.

Since elementary, schools had brought in speakers and motivators, all of which spewed the exact same line, the same fatalistic garbage fed to us every few years or so. The first time I ever had to sit through it I was in 4th or 5th grade. “One of you will be in jail some day.” The line dropped. We all squealed and jabbed each other in the ribs. “Nuh-uh!” We said. “It’s probably you!” we pointed at each other laughing.

It was very subtle, I wasn’t permitted to be aware of it as it was happening, but over time I was becoming less and less of what I was before.

It wasn’t until years later that I understood the truth and purpose of all those speeches and exercises, of what they were really adjusting me to.

The idea of the school to prison pipeline immediately invokes an image of a series of complex pathways and wrong decisions that lead to incarceration, but that couldn’t be any further from the truth. The reality is, that for many students and children, they’re already there. They’re already a number and an inconvenience.

According to the Children’s Defense Fund, “Black students are more likely to be suspended for disobedient/disruptive behavior, intimidation, or truancy, receiving 53.6 percent of suspensions for these behaviors, whereas White students only received 33.7 percent of these suspensions.” Not only that, but when it comes to offenses involving drugs or weapon paraphernalia, White students are suspended at a rate of 62 percent, in harsh contrast to the 23 percent suspension rate of Black students.

These types of zero tolerance policies not only fail to keep students significantly safer, they’re statistically proven to target poor and minority students at a disproportionate rate.

The only true purpose they serve is in reminding the disadvantage of their static place in society. That what is really expected of them flies in the face of that played out, social mobility, bootstrap rhetoric those same authority figures are so keen to recite on cue.

Discrimination on the economic line is just as disheartening. As of the 2015-2016 school year, poor students made up 20.6 percent of out of school suspensions per 100 students, that’s opposed to the 3.6 that more economically privileged students receive.

The punishments are often excessive, aimed directly at minorities and the disadvantaged. As a student, I can remember frequently being disciplined with detentions and suspensions. It was never for anything unruly or especially debaucherous, I wasn’t that type of student. More than anything it was for something as mundane and innocent as not being prepared for class. I didn’t bring a pencil or notebook? In-school-suspension. No binder or backpack? Another in-school-suspension.

Sure it seemed a little excessive, but I kept my mouth shut. That was just the way of things. I couldn’t possibly think to explain that all of my supplies had been lost or stolen or that I simply didn’t have the money to pay for it. Most times I felt too horrible and guilty to ask my Mom to pay for more school gear. The shame of poverty kept me from objecting or speaking up. This was my fault somehow, and I just had to deal with the consequences.

These small but significant microaggressions follow many students throughout their entire public school education.

It beats something into them, a thought at first, fleeting and flickering in the backs of their minds. After a while, the constant pelting leaves their egos pocked full of these divots of insecurity and self-doubt, until that fleeting thought, that passing idea, is now a fully realized accepted truth. The truth that we were all destined for that fall all along, and that dream of being anything else, that was the lie.

That’s the thing that had crept into me, that had replaced whatever bright-eyed innocence or hope I had ever had as a child: Resignation. Looking back now I saw it in the eyes of everyone around me too. We knew we were a statistic, a number. It had been drilled into us since we were old enough to learn how to be anything else.

And, unfortunately, a lot of us went on to fulfill that tragic prophecy. Incarceration rates among Blacks dwarf that of their White counterparts. According to a 2016 report written by Ashley Nellis, Ph.D., In Ohio alone, Blacks were incarcerated at a rate of 1,625 per 100,000. That’s compared to 289 of Whites at the same rate.

In the name of security and “tough love”, we’ve created a system that makes certain to demonize and discard the most vulnerable of our society. We fail them before they have a chance to try or to fall. We trap them between the force fed lies of hardworking payoff and the harsh reality of a system that wants no part of them and holds no place for them.

It leaves them stunned and asleep- paralyzed and hypnagogic to the American dream.

I remember the last time I ever went through that tired old exercise. It was new student weekend of college. I had managed to defy the statistics and the numbers and, weary eyed, I found myself in a huge and intimidating lecture hall. I sat side by side students with gaping hopeful eyes, that were absent of weariness and cynicism and part of me was a bit inspired by them all. There was a speaker there that addressed us. He was either a professor or someone they had brought it, but he was just as forgettable and faceless as all of the rest. “Look to your right.” He spoke. We did. “Look to your left.” We did. I groaned, knowing what would come next. “One of the people next to you will not be here for graduation. One of them will have dropped out.” The other students giggled nervously and jabbed at each other. Not me. I knew, even right there on a surface level, that it would be me. I had been dodging that bullet for too long, barely escaping the game of stats and numbers with my life, and I was tired. I was so tired.