What Is Going On At The Franklin County Dog Shelter?

Many people probably remember the Franklin County Dog Shelter being in the news last September when they had an outbreak of distemper (according to this, three dogs were found to have distemper), causing them to make the decision to euthanize 70+ dogs.

9 Awesome Weekend Trips For You And Your Squad

Criticism of the mass kill was abundant. A sampling:

So if dogs at the shelter were exposed between Aug 9-19, well….a mass kill is like closing the barn door after the horse is gone, isn’t it? There should have been an immediate announcement from FCDS that dogs adopted from the shelter between Aug 9-31 may have been exposed to distemper, so their families could be on the alert for signs.

The public held a protest at the facility on Tuesday, Sept 13. The protest centered around the fact that FCDS, knowing they had a case of distemper, still did not notify the public for 5 more days. During that time, they held an adoption event and hundreds, if not thousands of people came and went from the facility. Distemper is extremely contagious. A person can transfer the disease via their clothing/shoes to any dogs they come in contact with …

As to the statement that 49 of the dogs killed were not tested because it was “impractical”…well, the rescue community is not called a “community” for nothing. All the facility needed to do was reach out. The community would have found the money to test, because that would have been 2,000 times preferable to killing.

Elsewhere in the statement, Wilbers said “The 52 dogs that were euthanized had either shown “severe clinical signs” of distemper or were determined to not be suitable for quarantine.” But I’m not buying that. If that were the case, it would be unconscionable for the shelter to hold an adoption event, knowing that they had a bunch of sick dogs…wouldn’t it? Two other dogs showed signs (and it’s since been verified that they were positive for distemper). The others: those dogs‘not suitable’ for quarantine (whatever that means) could have been tested.

And let’s not forget…it’s standard procedure for a vet to vaccinate a dog against distemper…meaning that those dogs who were killed who happened to be lost pets…the chances that they were vaccinated is pretty damn high.

This criticism is key, because it causes one to wonder if the relationship between the rescue community and the Frankin County Dog Shelter is a healthy one.

On Tuesday a senior Great Dane mix was found in the near east side area and was taken in by Franklin County Dog Shelter. The dog was posted in a local Facebook group, which led to a person reaching out on behalf of a Great Danes rescue group, offering to rescue the dog, even if the dog turned out to need hospice care. You can read the resulting situation in the screencap below: 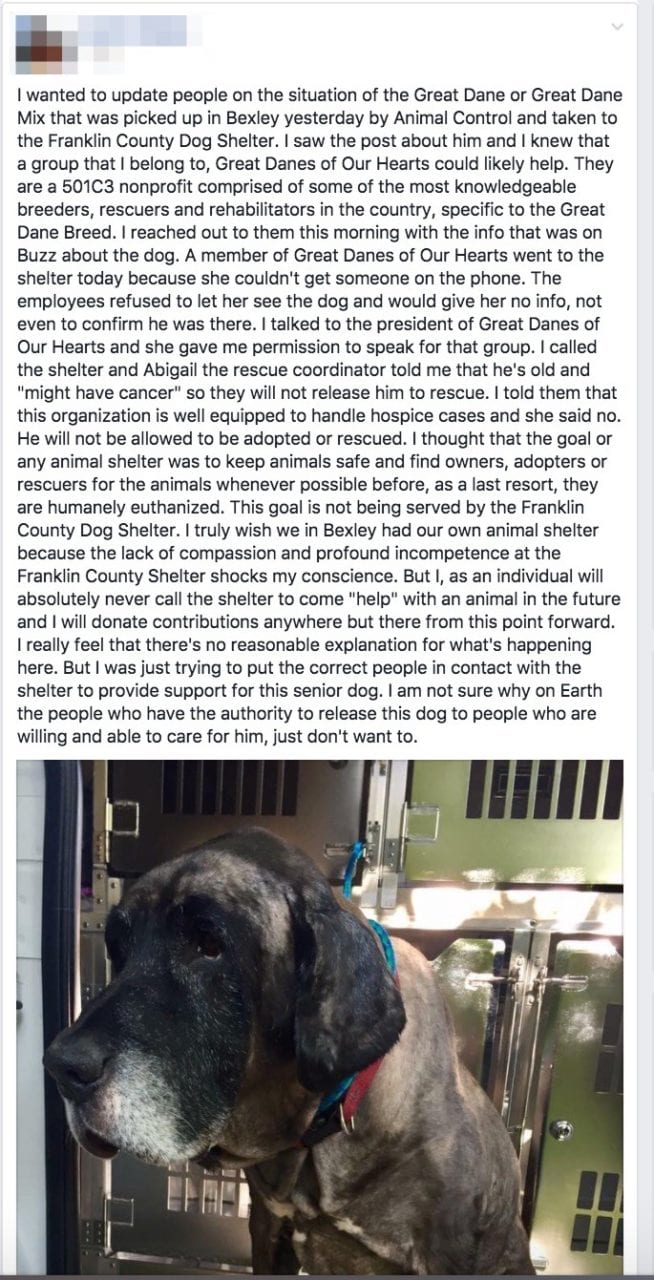 This comes just days after it was reported that the shelter is bursting at the seams with dogs, well over capacity.

I’ve heard so many stories over the years of difficult adoptions, rude employees, and arbitrary rules that sometimes seem made up on the spot. 196 of the 854 Facebook reviews are one star, and many of the 5 star reviews seem to be more about defending the dogs than the shelter (an example: I know you will read some horrible reviews about the time this dog shelter chose to put down 80+ dogs due to the fear of distemper. However, please do not let those reviews discourage you from adopting a wonderful dog from this shelter. The dogs there need our love, and their lives are depending on us.)

At this point, with all available evidence, I have a hard time imagining that I would ever surrender a found dog to this shelter in good conscience.

A Guide To High-End Consignment Shops In Columbus