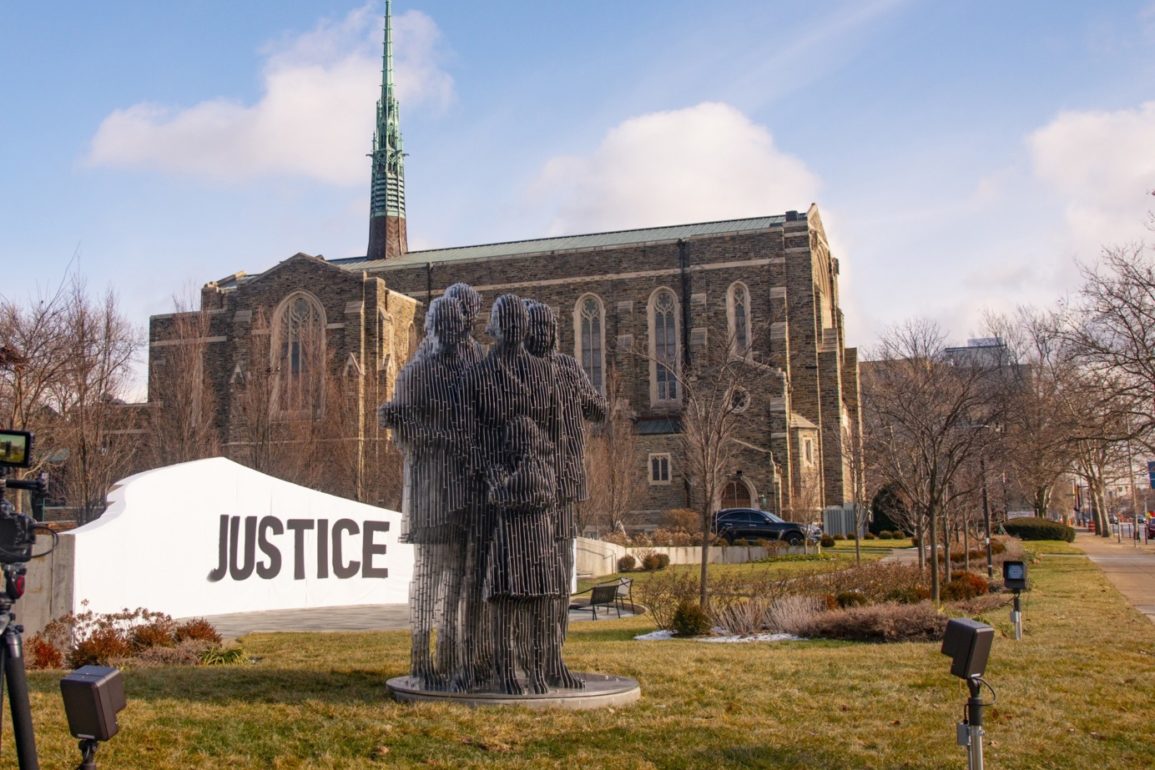 There’s a new public art exhibit in Columbus that you need to check out.

Visitors to the Washington Gladden Social Justice Park will now have the pleasure of admiring one of the most incredible sculptures in Columbus. “Our Single Garment of Destiny” was dedicated in the park, located at East Broad Street and Cleveland Avenue, on Martin Luther King Jr. Day.

The sculpture was created by husband and wife team Julian and Andriana Voss-Andreae. The Portland-based duo participated in a national competition that saw submissions for the public artwork as the centerpiece of the park. The sculpture was inspired by Martin Luther King Jr.’s “Letter from a Birmingham Jail” published in 1963. The passage that inspired the art remains profoundly relevant, nearly 60 years later.

“Moreover, I am cognizant of the interrelatedness of all communities and states. I cannot sit idly by in Atlanta and not be concerned about what happens in Birmingham. Injustice anywhere is a threat to justice everywhere. We are caught in an inescapable network of mutuality, tied in a single garment of destiny. Whatever affects one directly, affects all indirectly.” – Martin Luther King Jr., “Letter from a Birmingham Jail”

The 5,500-pound metal sculpture is composed of thin vertical plates that represent a cluster of six persons, but when the artwork is viewed from a particular angle, the human beings all but disappear.

The sculpture serves as a dual metaphor, suggesting how a small group of diverse, yet unified, people can build movements for social justice “creating ripples that emanate and can grow into waves of transformational change.” It also proposes that despite our differences, we are all part of a single living ecosystem. When we cause harm and suffering to others, we are simultaneously inflicting suffering upon ourselves.

Washington Gladden Social Justice Park opened back in 2018 and is named for Rev. Dr. Washington Gladden (1836-1918) who was the pastor of First Congregational Church of Columbus. The park is overseen by a board of community members and was funded by numerous private and corporate donors. To learn more about the park, or to start planning your visit, you can visit www.socialjusticepark.org.