A whiz of a pizza Wiz, if ever a Wiz there was. 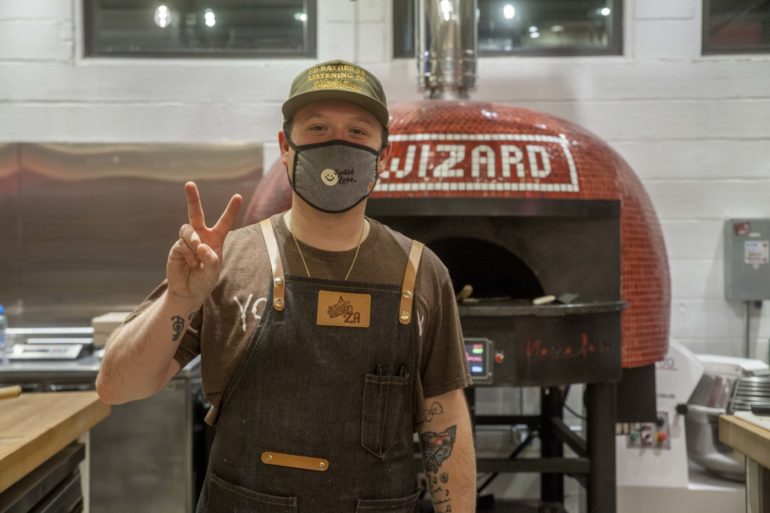 Spencer Saylor at Wizard of Za in Clintonville.

Wizard of Za first popped onto the Columbus Food Scene by way of Instagram back in 2019. Spencer Saylor, who previously worked as a touring musician, had always known that he wanted to open a restaurant.

“I’ve always been in the food and beverage industry. Opening a restaurant has been a lifelong goal of mine,” Saylor told me. “More recently I set permanent roots in Columbus. At the beginning of 2020, I thought I was 3-4 years out from being able to open a brick and mortar restaurant.”

What started as an exclusive, somewhat mysterious experience where you could only order through Instagram, Wizard of Za has grown into a brick and mortar pizza joint in Clintonville. The journey may have been quicker than Saylor expected, but that’s not to say it hasn’t been without its ups and downs. 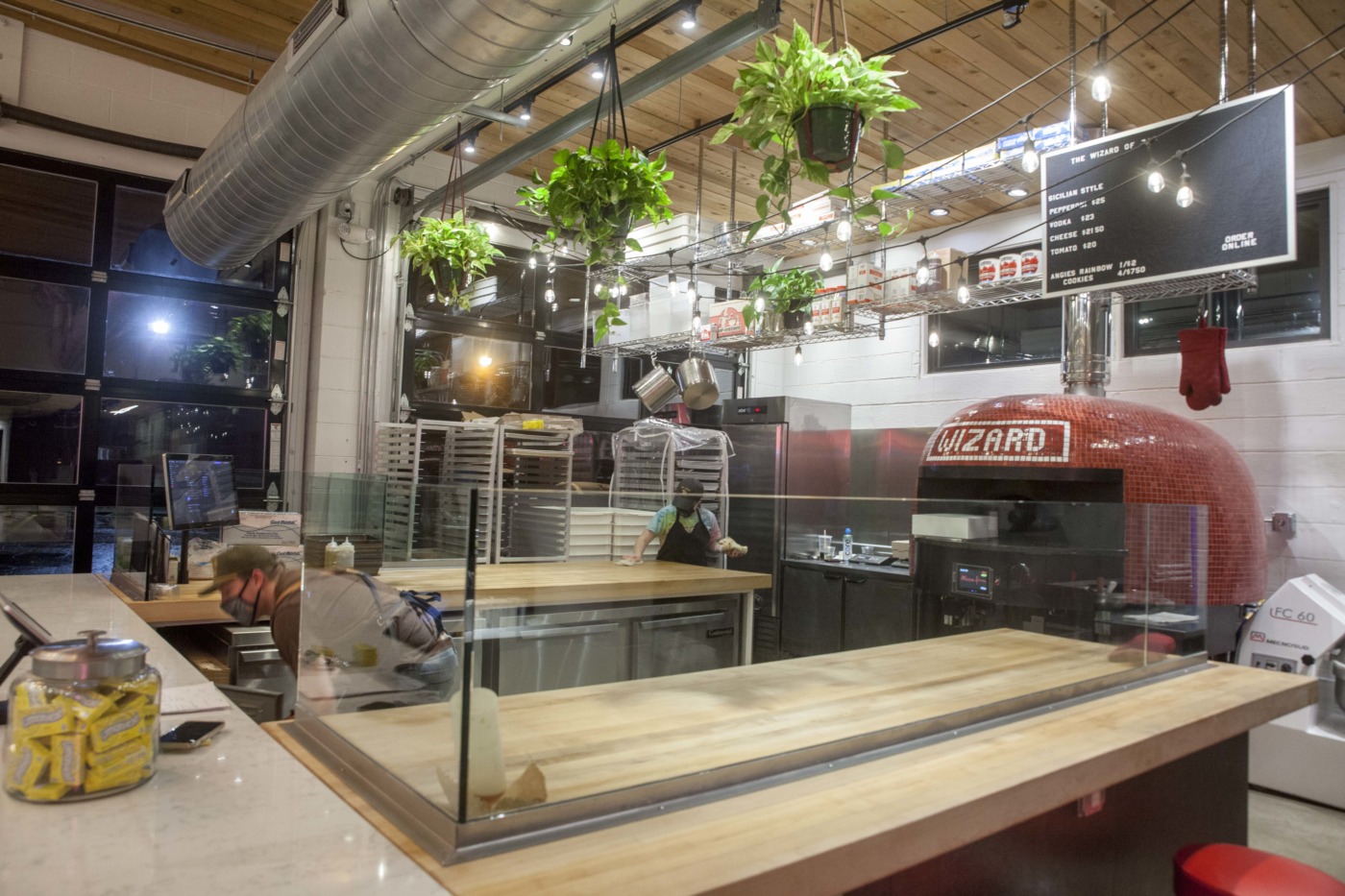 The pizza at Wizard of Za is Sicilian style. It is made with a focaccia crust, and this square pizza is a little thinner than a Detroit-style pizza. Wizard of Za’s pizzas are a little heavier on the sauce, served with fresh mozzarella and fresh basil. Every ingredient in the pizza is homemade, with the exception of the Ezo pepperoni.

Right before the pandemic hit, Saylor made the decision to lean into Wizard of Za full time. In early 2020, celebrities like John C. Reilly and Chef Robert Irvine were on the exclusive waiting list for a pizza.

A post shared by The Wizard of Za (@wizardofza)

As word spread around Columbus about this mysterious and delicious pizza option, the waitlist grew larger and larger. Now thousands of Saylor’s Sicilian-style pizzas have gone out to patrons around the city, while thousands more are still waiting.

“This all started when COVID-19 hit, so folks were at home, they were on social media a lot, and they were looking for ways to experience food in ways that they hadn’t before,” said Saylor.

Throughout our conversation, one common theme that kept coming up was nostalgia. Food has a way of bringing people together and most families have that one restaurant that is woven into the fabric of family memories. Tapping into that nostalgia was important for Saylor. 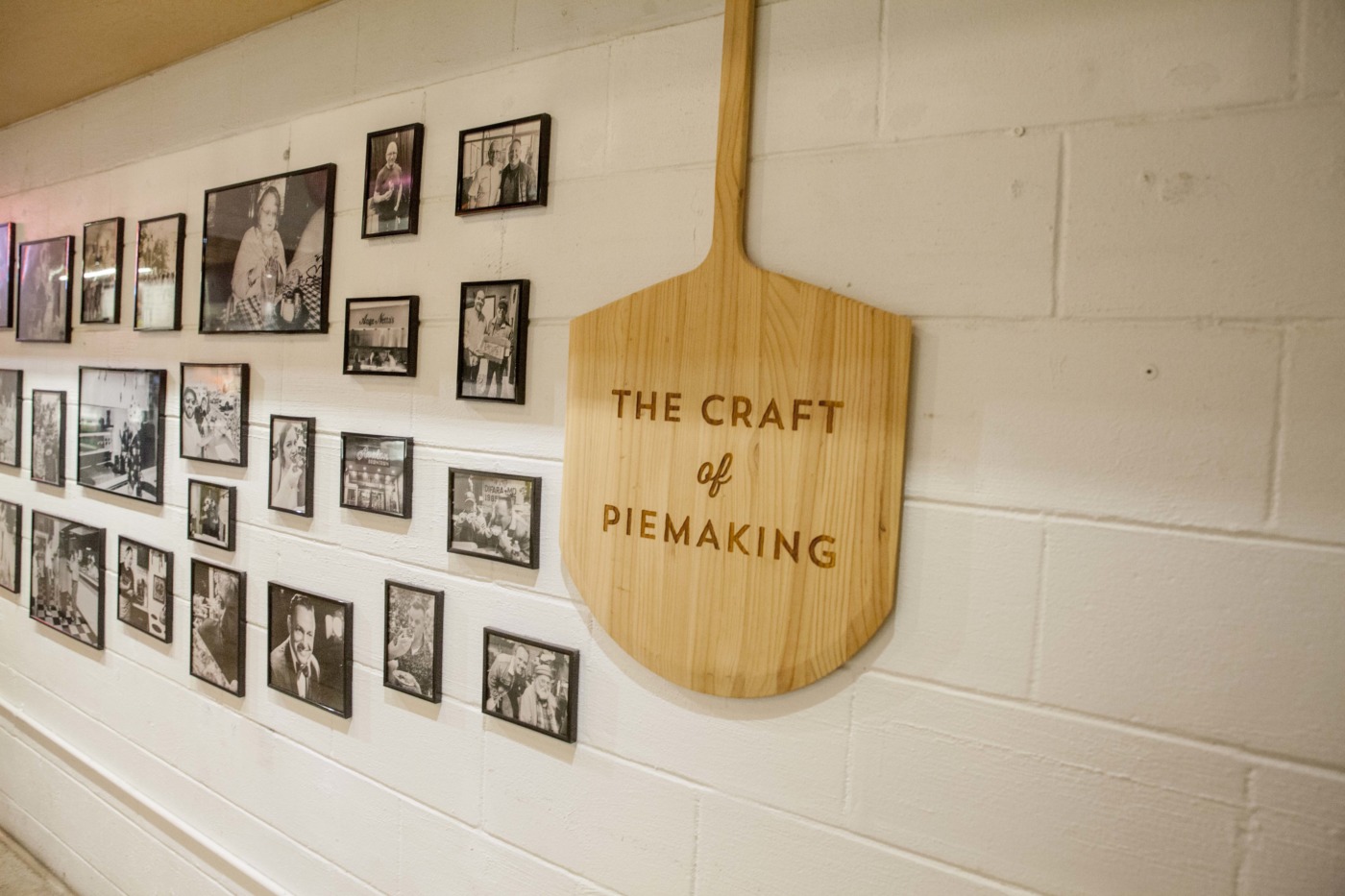 “I just like bringing people good food. I like making them happy with something as small and cliche as pizza,” he explained. “When people bite into my food and they try it, that’s the reaction I want them to have. That nostalgic feeling of being around a table with their family on a Friday night. Just being able to bite into it and have the homey, comforting experience.”

When it comes to ordering a pizza from Wizard of Za, Saylor is still working through the existing waitlist. Those lucky enough to snag a pizza are sent instructions on when and how to pick up their pizza. But by February, Wizard of Za hopes to be through the waitlist and officially open to the public. 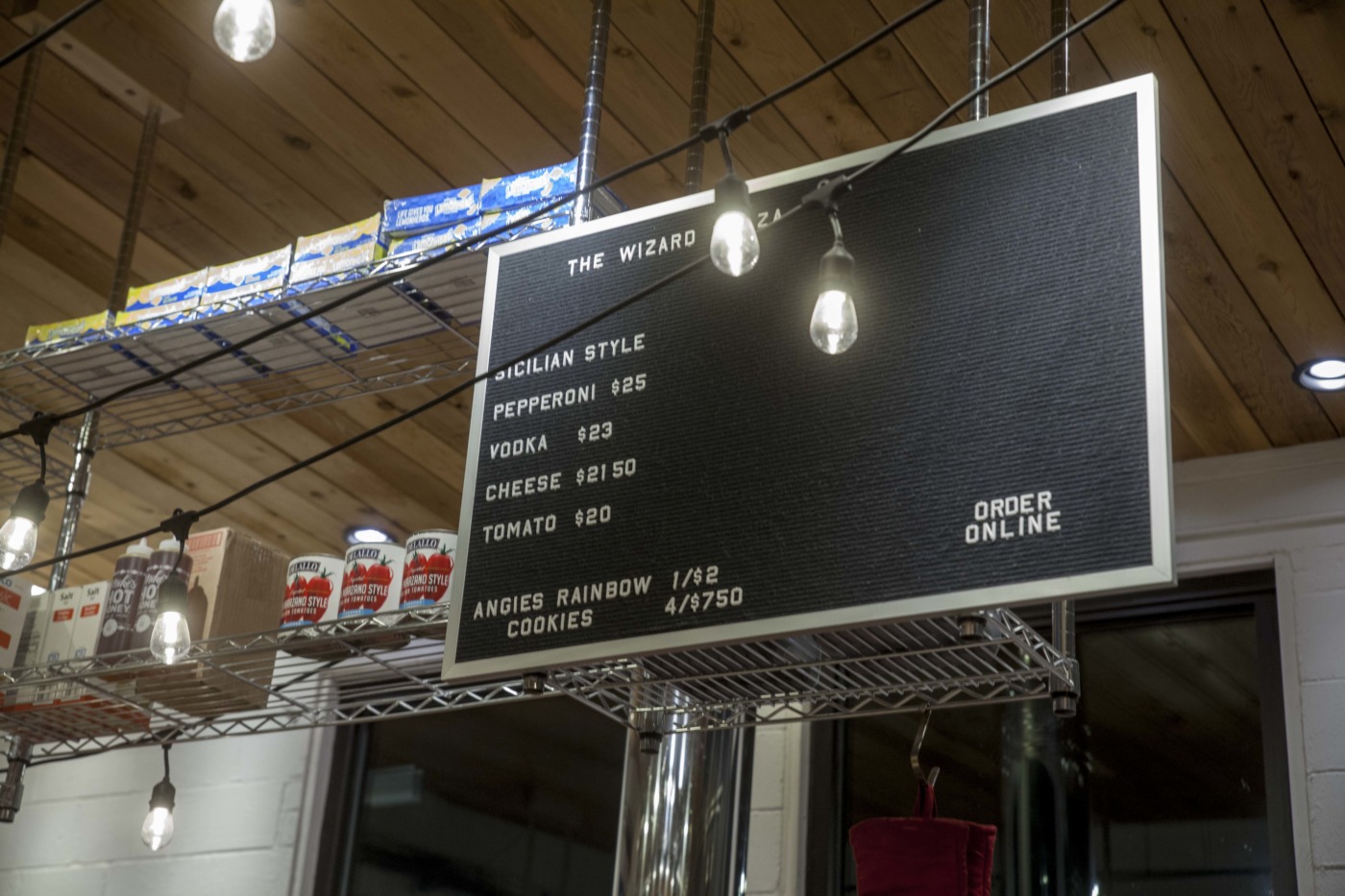 You’ll still have to order your pizza in advance online since everything is made from scratch, but you won’t be waiting for months to get this delicious pizza. To make his brick and mortar dreams come true, Saylor teamed up with the crew at FUSIAN.

Now, the fast-casual sushi joint shares its Clintonville space (4214 N. High Street) with Wizard of Za, and that includes the massive, and beautiful, pizza oven.

A post shared by The Wizard of Za (@wizardofza)

Although Sicilian style pizza isn’t traditionally made in this style of oven, Saylor was able to make it work and it’s really a statement piece in the restaurant space. Adorning the white walls are dozens of photographs, a collection Saylor hopes to grow over time.

“I wanted to have that traditional, family pizza place vibe,” he explained. 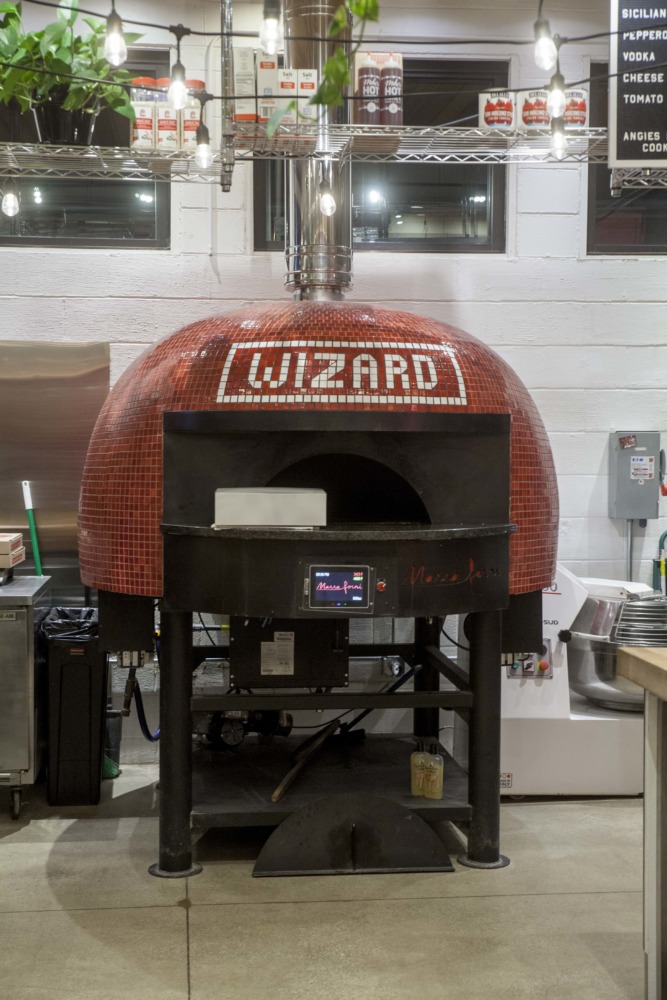 It’s been incredibly interesting to watch the hype surrounding Wizard of Za grow over the last year, but I’d be lying if I said it didn’t make me wonder how the pizza could possibly live up to my expectations.

But now, I can tell you enthusiastically, it was well worth the wait. That nostalgic, homey quality Saylor told me about months ago hit me with the first bite. Not only can you taste the fresh ingredients, but you can also taste the care and love he puts into crafting each pie. 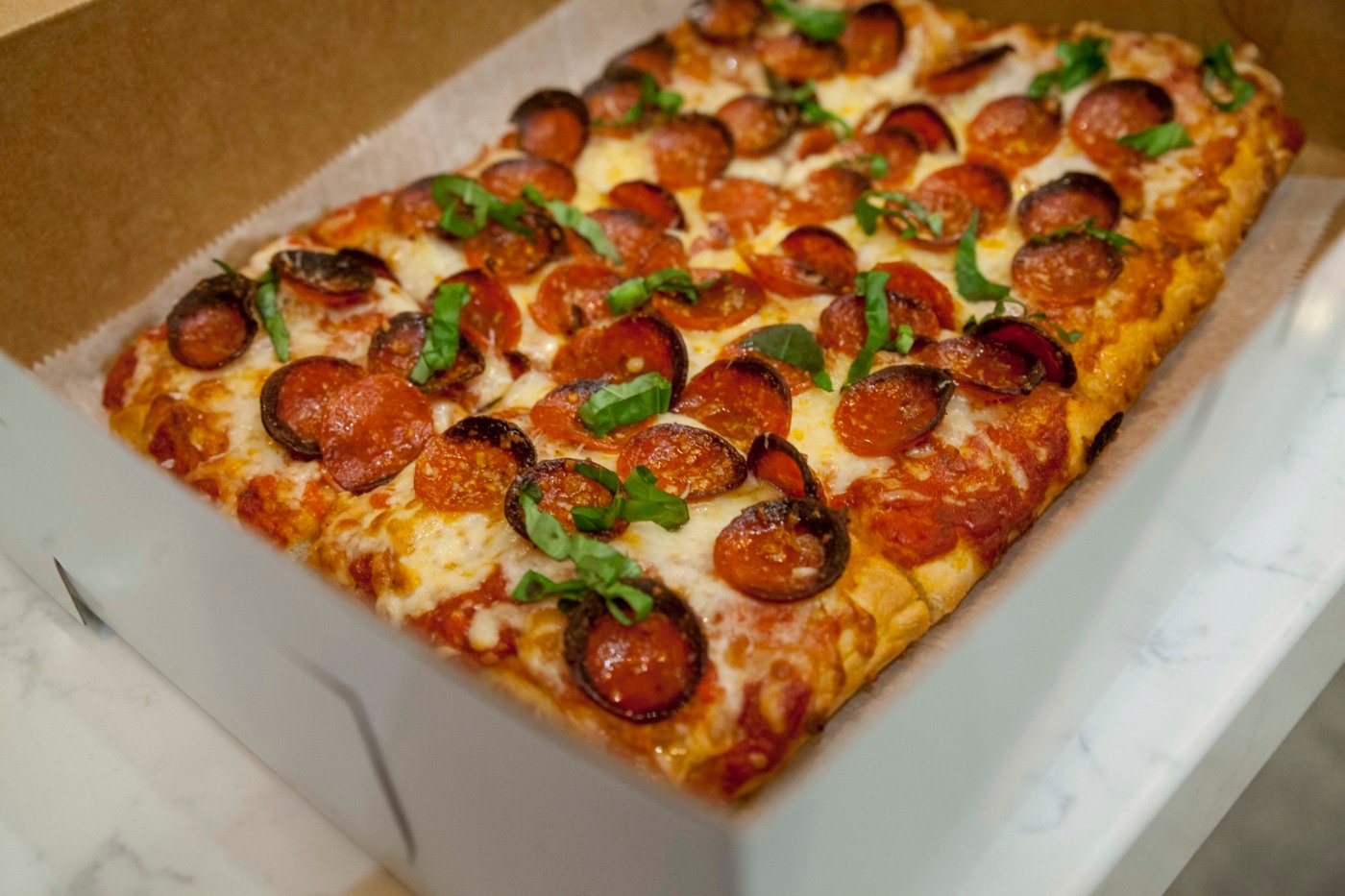 The pizza is crispy where it needs to be and doughy where you want it to be, and the flavors are perfectly balanced. I was genuinely hoping to have some leftovers since we all know that a pizza’s ability to be eaten for breakfast is a crucial point of judgment, but we devoured the pie.

I guess we’ll just have to wait until February when direct ordering is available to fill you in. Overall, a visit to Wizard of Za, much like the movie that inspired the quippy name, is a sensory experience. If every other pizza in Columbus is in black and white, Wizard of Za is most certainly technicolor. 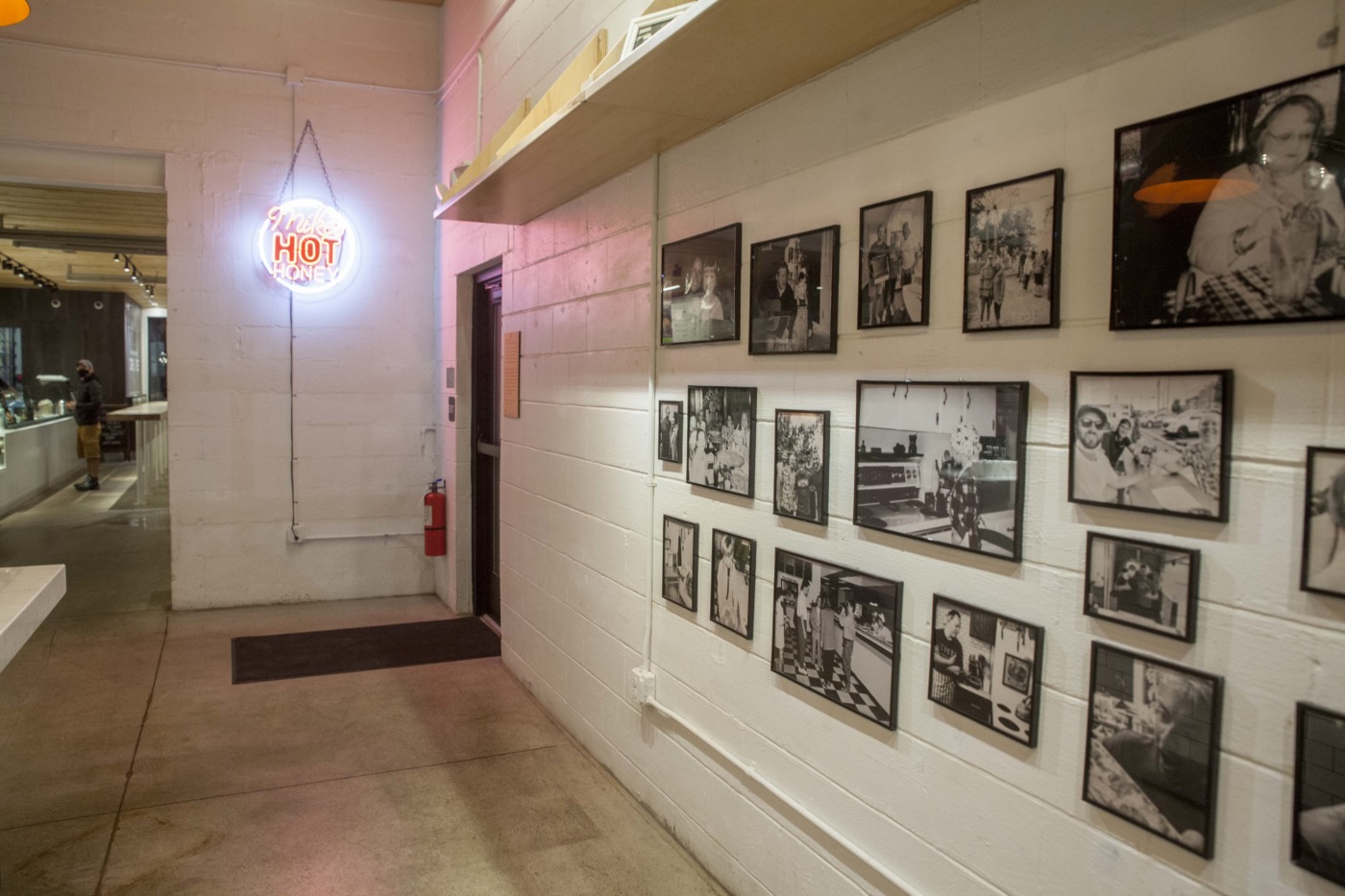 “When this started I never, in a billion years, anticipated that I’d be opening up a brick and mortar location. That’s the dream come true part of this,” said Saylor. “Everything that has happened up to this point, I owe it to the people of Columbus. None of this was created without Columbus being such a supportive community. That’s what awesome about Columbus.”

For more info about Wizard of Za, you can visit their website here. To get an email notifying you when direct ordering is available, please click here.