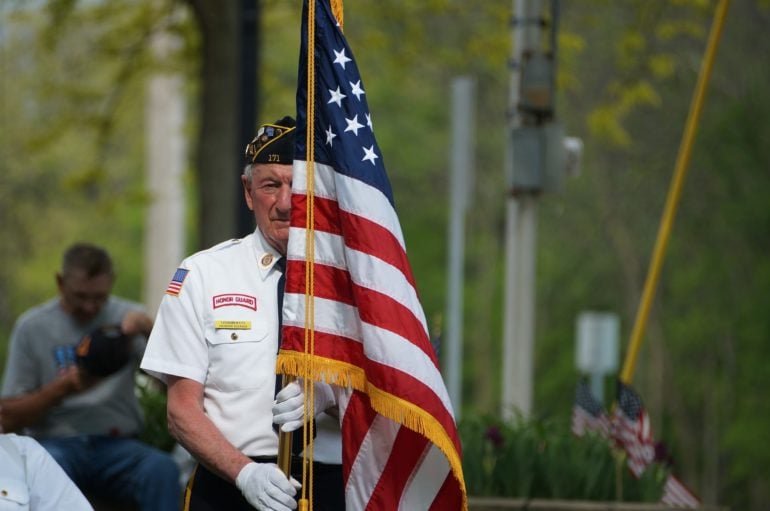 How To Celebrate Veterans Day In Columbus

It’s time to celebrate some of the best people in America: our veterans.

Our country wouldn’t be what it is today without the brave men and women who put their lives on the line. They deserve so much more than just a holiday, but the very least we can do is show them how grateful we are for their service! Here are some amazing ways to celebrate these extraordinary people and some deals to share with your loved ones who have served or to get in on if you yourself are a veteran! ❤️

The MILVETS parade will kick off at Noon on Friday, beginning at N. High St. and Nationwide Blvd. before traveling south on High Street and turning west onto Broad Street. The parade will honor the 100th anniversary of the end of WWI plus the founding of the American Legion!

In honor of Veterans Day, the National Veterans Memorial and Museum will be hosting a panel on November 11 at 2 p.m. featuring “notable veteran voices.” Tickets for the panel are free. Veterans who attend the event will also receive free admission to the museum and other attendees will receive discounted admission. Click here for more details.

In Delaware, the parade will start at 3 p.m. on November 11 at Ohio Wesleyan University and then head through downtown Delaware to the fairgrounds! After the parade, attendees are invited to a ceremony of celebration.

Celebrate Veterans Day by listening to an honored veteran, Major General Gregory L. Wayt at Veterans Park in Dublin. The ceremony will begin at 11 a.m. on November 11.

The city of Gahanna will host an 11 a.m. ceremony at Veterans Memorial park (73 W. Johnstown Rd) on November 11. Residents are encouraged to come and thank the city’s veterans for their service!

The public is invited to the annual Veterans Day service, hosted by the American Legion Paschall Post 164 and Veterans of Foreign Wars 8198 at 11 a.m. on November 11 at the Grove City Museum & Welcome Center, 3378 Park St.

Additionally, The Grove City Museum is open from 10 a.m. to 1 p.m. where visitors can view a military exhibit featuring uniforms and memorabilia from many Grove City residents who served.

Head to Hilliard at 2 p.m. on November 11 for their annual Veterans Day Parade. The route starts at the Franklin County Fairgrounds, 5035 Northwest Parkway before heading to Veterans Memorial at Roger Reynolds Municipal Park.

There, retired Marine Sergeant Major George Mussi, who is also the Grand Marshal of the parade, will give a keynote speech! Following the parade, a free bean and cornbread dinner will be served at the Hilliard United Methodist Church from 3 p.m. to 6 p.m. Donations will be accepted for the American Legion’s “Gifts for Yanks” program.

The Johnstown parade will step off 11 a.m. on November 11 from Johnstown High School. The parade will continue to American Legion Post 254 where lunch will be served once the parade concludes!

Marysville will host their annual Veterans Day Parade from 11 a.m. to 2 p.m. on November 11 in Historic Downtown Marysville. Following the parade at 2 p.m., a celebration will take place at the Union County Courthouse.

On November 11 at noon, Pleasant Township will host a rededication of the World War II monument located on Route 13. Attendees will have the opportunity to hear a real-life hero, retired Major General David Hartley speak at the event.

Greater Powell Veterans Memorial in Village Green Park will host a ceremony at 11 a.m. on November 11, followed by a free lunch for veterans, military personnel, and their friends and family. This event is rain or shine, and there is an indoor venue just in case Ohio tries to “Ohio”.

Gather up the whole family and kick your holiday off early in Westerville on November 11. At 8:30 a.m., there will be a free pancake breakfast for veterans at the Westerville Community Center. If you aren’t a veteran but you’d still like to attend, the cost is $5 per person.

On November 10, the City of Whitehall will honor veterans with a parade! The festivities will begin at Etna Elementary School at noon, with the parade route ending at Whitehall High School.

In honor of Veterans, several companies, both local and nationwide, will be offering deals and discounts! Since these brave men and women lay their lives down on the line for all of us, a few freebies are the least we can do!

The Columbus Zoo, Central Ohio Transit Authority (COTA), Roosters, Johnson’s Real Ice Cream and many more will be participating. To see a list of over 50 deals, please click here.

Veterans, we hope you have a wonderful day and know that we’re truly grateful!