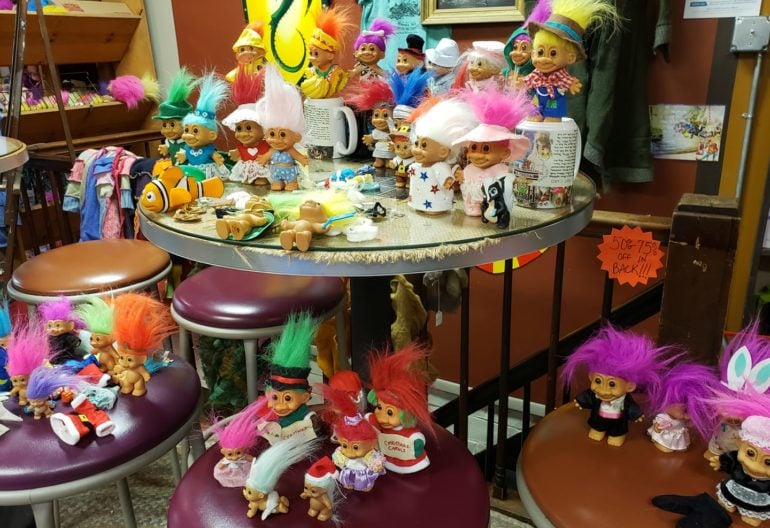 This Unique Museum In Northeastern Ohio Has Over 20,000 Troll Dolls On Display

Growing up, nearly everyone I knew had one thing in common: we all owned troll dolls.

Personally, I was a fan of the Treasure Trolls variety. I don’t know if it was their brightly colored hair, the sparkly faux gemstones on their stomachs, or just the fact that I was extremely susceptible to fads as a child, but I was obsessed.

I know I wasn’t the only kid who was constantly disappointed by the fact that the wishes I made by rubbing their bejeweled belly buttons never came true. But that didn’t stop me from asking for new trolls to add to my collection.

These tiny, collectible dolls burst onto the world’s stage in 1959 and took the UK by storm. The fad got really insane here in America in the 80s and 90s and their popularity is still going strong, thanks to the popular Dreamworks movies.

But no matter how much you loved your trolls, there’s no way you love them as much as Sherry Groom. Groom owns The Troll Hole, a shop and museum in Alliance, OH and has been collecting Troll Dolls since she was 5 years old. Groom opened the Troll Hole Museum in 2013 to showcase her record-setting collection of Troll Dolls.

The Troll Hole has over 20,000 troll items, with floor to ceiling shelves full of troll dolls, a Dreamworks Troll themed room, an eclectic gift shop and the Grumpy Troll cafe. There is even a Troll Bridge and a Troll Sculpture garden that includes a 10 ft. Troll Mountain. Did I mention the perfectly Instagrammable mural? It’s troll-a-palooza, my friends.

Throughout the year, The Troll Hole hosts a variety of events. Every Sunday, visitors can meet Princess Poppy from Dreamworks’ Trolls. The museum also hosts periodic comedy nights where you can enjoy a comedic tour through the museum.

The Troll Hole is open Friday through Sunday and all tours must be scheduled in advance. General Admission tickets are $10, with discounts for seniors, students, and kids. The Troll Hole is located at 228 E Main St, Alliance, OH, 44601.