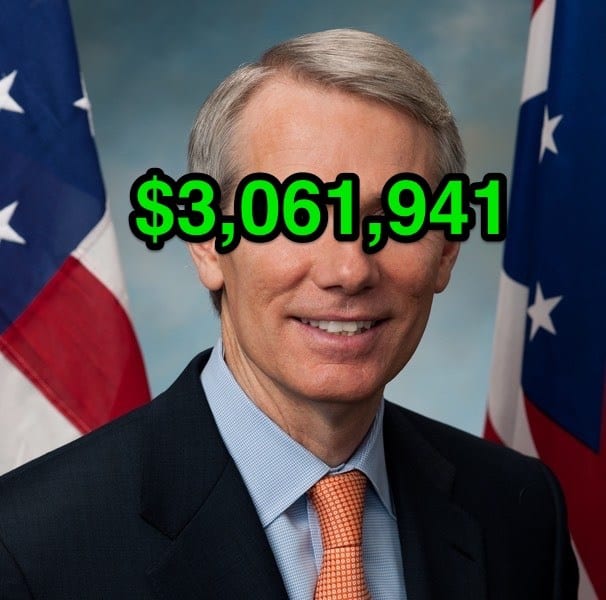 A Reminder That Rob Portman Is Wholly Owned By The NRA

Heartbreaking news out of Florida. Jane and I send our prayers to the school, the community, and the victims of this tragedy.

Rob Portman is up to $3,061,941 in donations from the NRA, an organization that exists to protect the profits of gun manufacturers, despite a stated objective of “defending 2nd amendment rights”:

“In reality, the NRA is composed of half a dozen legal entities; some designed to run undisclosed attack ads in political campaigns, others to lobby and collect tens of millions in undisclosed, tax-deductible sums. This power has only been enhanced in the era of Citizens United, with large GOP donors in the last election reportedly funneling money to the NRA simply to use the group as a brand to pummel Democrats with nasty ads. (As The Huffington Post’s Peter Stone reported, even the Koch network now provides an undisclosed amount to the NRA.)Despite the grassroots façade, there is much evidence to suggest that corporations that profit from unregulated gun use are propping up the NRA’s activities, much like how the tobacco lobby secretly funded “Smokers Rights’” fronts and libertarian anti-tax groups, or how polluters currently finance much of the climate change skepticism movement.

In a “special thanks” to their donors, the National Rifle Association Foundation lists Bushmaster Firearms Inc., the company that makes the assault rifle reportedly found with the shooter responsible for the mass murder today in Newtown, Connecticut. How much Bushmaster Firearms Inc. (a firm now known as Windham) contributes is left unsaid.

The Violence Policy Center has estimated that since 2005, gun manufacturers have contributed up to $38.9 million to the NRA. Those numbers, however, are based on publicly listed “sponsorship” levels on NRA fundraising pamphlets. The real figures could be much bigger. Like Crossroads GPS or Americans for Prosperity, or the Sierra Club for that matter, the NRA does not disclose any donor information even though it spends millions on federal elections.”

‘No Way To Prevent This,’ Says Only Nation Where This Regularly Happens https://t.co/AiYGBQLaGW pic.twitter.com/Zr0X8qcDqJ