America is in the grips of a deadly epidemic and Ohio is at the epicenter.

The growing opioid crisis has deeply affected the Buckeye state, where opioids have claimed more lives per capita than anywhere else in the country. On August 10th, 2017, President Trump declared the opioid epidemic a national emergency. But since that declaration, little has been done to help on a federal level.

In 1999, the national overdose rate was about six per 100,000 people. In less than twenty years, that average has more than tripled. The numbers are alarming, but not as alarming as statistics coming out of Ohio. Since 1999, Ohio’s overdose rate has grown nine-fold. 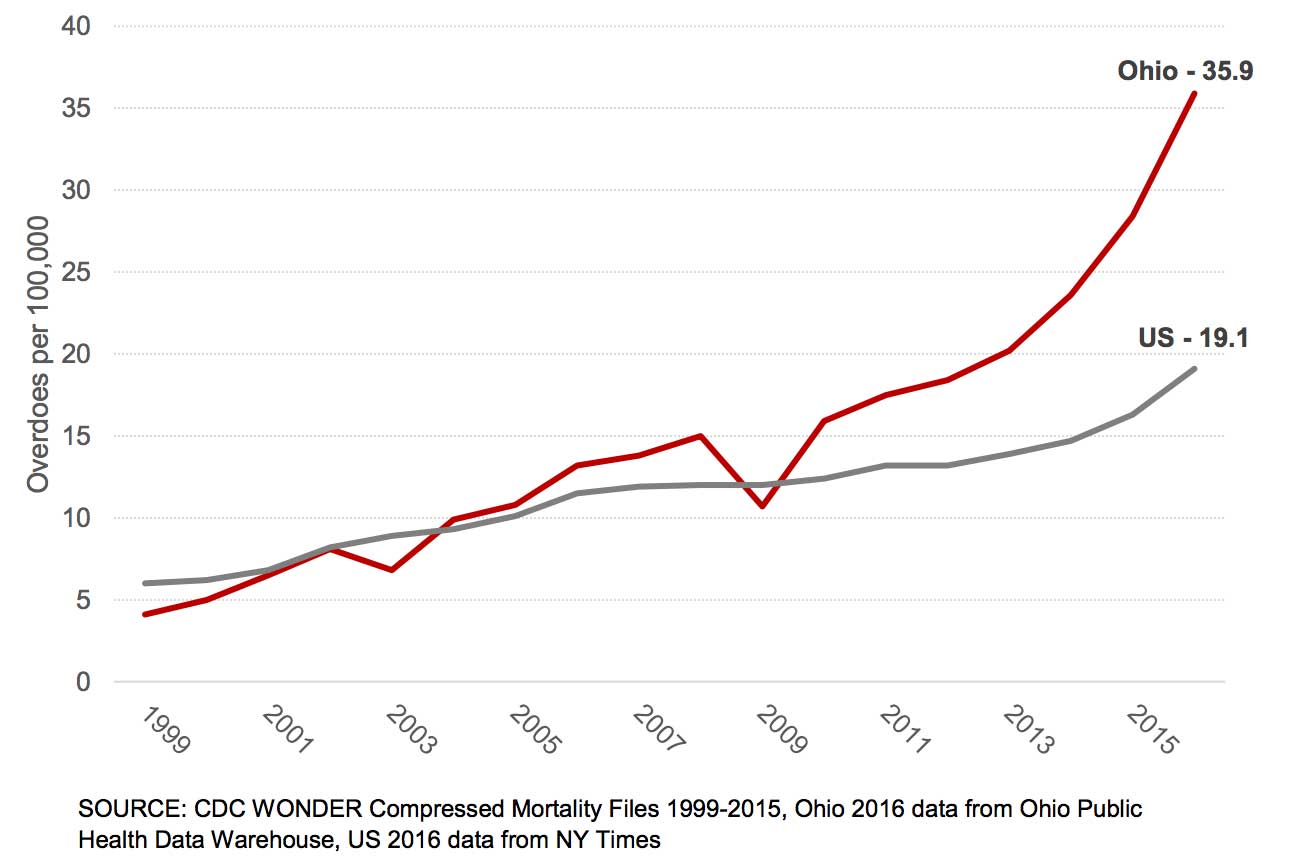 So what are we doing about it?

On Wednesday morning, settlement talks began for over 250 federal lawsuits that have been filed against pharmaceutical companies and distributors. U.S. District Judge Dan Polster in Cleveland will oversee the settlements and Ohio Attorney General Mike DeWine believes that he’s the right man for the job.

Drugs like Oxycontin, Vicodin, Heroin, and Fentanyl were responsible for 42,000 deaths in 2016 alone. That number is expected to increase once the Center for Disease Control processes data from 2017.

In addition to the federal lawsuits, the State of Ohio is looking for other ways to solve the problem. Earlier this week, the first phase of the $8 million Opioid Technology Challenge was completed. Five high-tech opioid solutions were granted $10,000 to move their projects into development.

Among the ideas were digital therapy options, tech to monitor brain activity related to opioid use, and VR glasses that help patients combat physical pain without the aid of painkillers.

“Ohio put out the call for new ideas and people from across the world responded,” said David Goodman, director of the Ohio Development Services Agency and chair of the Ohio Third Frontier Commission in a statement.

“This issue affects countless individuals, families and communities, so we’re thrilled by the level of response and excited to move these ideas forward and save lives.”

Yong Pei and the team at Kinametechs in Cincinnati believe that an augmented reality based interactive coaching system could have big impacts on stopping opioid addictions before they begin. This improved physical rehabilitation would reduce a patient’s need for prescription pain medication and lessen their potential for addiction.

The glasses would use computer-generated information about the patients real world based on smells, sounds, and other signals that enhance what a patient experiences.

“So basically, when the patient after surgery being discharged from the hospital goes back home, they will bring home a pair of augmented reality based glasses,” Pei told WOSU. “These glasses will help them manage their pain and manage their rehabilitation.”

The next part of the competition will be the Challenge Phase, which will see actual products developed. After winners are announced in August 2019, the winning tech will hopefully be available on the market within the next two years.

In Ohio, schools are required to provide health curriculum that includes instruction on the dangers of prescription opioid abuse. Programs like the Health and Opioid-Abuse Prevention Education (HOPE) and Start Talking help students attain functional knowledge, attitudes, and necessary skills to prevent drug abuse, as well as how to seek out help for mental health and addiction.

But even with all of this progress, there is still a long road ahead.

Addiction is often a result of a complicated combination of social, health, and economic factors. According to a study done at the Ohio State University, opioid abuse and dependence likely generate between $6 and $8 billion in annual costs in Ohio alone.

The answers to solving this crisis aren’t simple. They are layered and dependent on multiple strategies working together to reduce addiction rates. The state will need to combine education, prevention methods, and access to treatment in order to be successful. Luckily, that seems to be the direction we’re headed in.