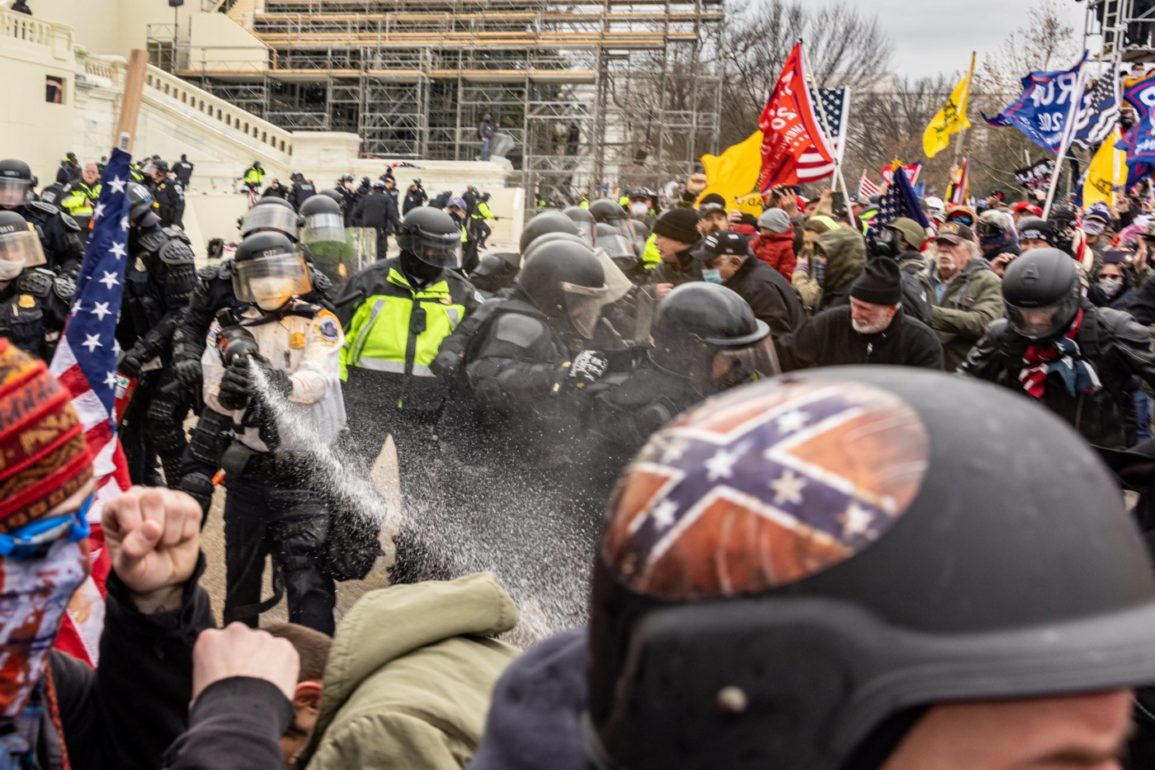 How Do We De-Radicalize? Three Experts In Political Extremism And Violence Share Ideas

The most urgent civic project of the next few years will be deradicalizing Americans who believe that in the absence of success at the ballot box, armed insurrection is a legitimate response.

The events of Jan 6, when an extremist mob loyal to then-President Donald Trump stormed the Capitol, have brought the scope and urgency of the problem into clearer focus, but the tremors have been detectable for years.

More than a decade ago, an intelligence analyst at the Department of Homeland Security warned about the threat of violence from right wing extremists. Republicans in Congress cried foul, and then many went on tolerating and often encouraging those very same extremists for the next decade.

Political violence — though more prevalent on the right in recent years — is not exclusively a phenomenon on that side of the spectrum. A gunman who was distraught over President Donald Trump’s election in 2017 opened fire on Republicans during a Congressional softball game, badly injuring Rep. Steve Scalise, R-Louisiana. Leftists in Portland, Ore., routinely engage in destructive vandalism of everything from the Oregon Democratic Party headquarters and local ICE office to the Oregon Historical Society.

As Maggie Koerth and Amelia Thomson-DeVeaux recently noted in FiveThirtyEight, a substantial portion of supporters of both parties won’t rule out violence against political opponents. They cite multiple surveys conducted by Liliana Mason and Nathan Kalmoe showing that 15-20% of Americans say violence was somewhat justified, particularly if they lost the 2020 election.

I sent some questions to experts in political violence and extremism: John Horgan, a Georgia State psychologist and the editor of the journal Terrorism and Political Violence; Michele Gelfand, a University of Maryland professor of psychology who has written about the psycho-social conditions of populist authoritarianism; and Jocelyn Bélanger, a professor of psychology at New York University Abu Dhabi whose work in human motivation informs his scholarship on political violence.

States Newsroom: Having examined radicalization, what were your thoughts as you watched Jan. 6?

John Horgan: It was the shocking and inevitable culmination of four years of polarization and radicalization. I predicted in July of last year, and again in November, that there would be a strong possibility of election-related violence. In the days leading up to the 6th, the rhetoric from former President Trump and his most staunch allies — especially Senator Ted Cruz — all but guaranteed mobilization. Words have consequences, and we came dangerously close to an unbridled massacre as a result. I think it will take years for the full impact of this event to truly sink in.

Michele Gelfand: Like so many other people, it was horrifying to see the events unfold as the protesters attacked the U.S. Capitol. As someone who has studied other autocratic countries, I never thought that this would happen here on U.S. soil.

Jocelyn Bélanger: This was predictable — Trump set the stage for this event months ago, psychologically preparing his supporters to experience injustice, anger and revolt, by talking about voter fraud without any concrete evidence. Trump supporters have been radicalized by being fed lies for many years — starting with the claims that Obama wasn’t born in the U.S. Some Trump supporters adopted a worldview that operates on the fringe of reason — a place where feelings have more weight than evidence. They progressively became ideologically obsessed, divorced from reality, adopting a cult-like devotion to a leader that ultimately whipped them into a frenzy and acts of violent extremism. This is a common radicalization trajectory.

States Newsroom: Compare and contrast the somewhat disparate (but unified in their pro Trump extremism) movement we’ve seen in the Trump era vs., say, Isis or other extremism.

John Horgan: I see plenty of similarities between the most ardent true believers of Trump and those of Isis. Believers from both camps bought into a worldview where they felt that a better life awaits, and that they had a role in bringing that about as long as they rose up to take action against their enemies. In both camps, there are those who are willing to fight and those who are even willing to risk their lives for their beliefs. Trump amassed an extraordinary following, some of whom became radicalized to the point of violent extremism when their leader made them feel that their very way of life was under threat.

Michele Gelfand: The extremism is similar to other movements in that people feel threatened for a variety of reasons and are attracted to groups that promise to return them to a traditional, familiar order. They also promise to give them what Arie Kruglanski calls “significance.” In this highly unusual case, it was a U.S. president who amplified their feelings of threat and gave them a sense of entitlement, lighting the fire of extremism.

Jocelyn Bélanger: Our research shows there are three important commonalities shared by extremist movements: The need, which refers to people’s desire for personal significance, to matter, to be important. The narrative, which tells an individual where violence should be directed to gain significance. And the network, the group that validates the collective narrative and dispenses rewards such as respect and honor to its members. These components are conspicuous in the pro Trump movement: Disenfranchised white people (need); grieving a so-called “stolen election”; believing that storming the Capitol with other MAGA supporters — their network — is an act of patriotism that will help overturn the election results (narrative).

States Newsroom: How should we attempt to engage in de-radicalizing this population?

John Horgan: The wounds are open, and they are raw. Radicalism is not a bad thing in and of itself. America was founded on radicalism, and we live in a society where expressing radical ideas can lead us to achieving extraordinary things. When radicalism comes at the expense of others, we have polarization, and ultimately extremism. Trump succeeded in making us all feel that one side could only win at the other’s expense. We need to find common ground. This is not about excusing racism, or excusing all that some have done to enable and facilitate the rise of Trump. It is about healing, re-exploring our shared humanity. It sounds so trite, and cliched, but we’ve got to do it. De-radicalization is a tall order, and it doesn’t happen overnight. It’s a process, a journey, and it involves lots of little steps. Let’s start by taking time to reflect on what we want to be and where we want to go. We have some breathing space and we’d be foolish to squander it. We almost lost it all.

Michele Gelfand: We need to engage with people who feel threatened. In America’s loose culture, it’s easy to get lost. [Editor’s note: Gelfand argues there are “loose” and “tight” cultures, with the latter enforcing their norms far more strictly; ours is a loose culture with more freedom than most societies, which can make people feel unmoored in times of threat.] We need to help people attain the skills to succeed given the rapid changes that are occurring across many industries.

Jocelyn Bélanger: Our research shows that the best way of changing people’s radical beliefs is actually not to challenge them. Doing so only strengthens their beliefs — that’s how people behave when they feel psychologically threatened. Radicalization stems from the frustration of psychological needs. Therefore, the best way to deradicalize people is to steer them toward activities or (non-violent) groups through which they can experience personal significance and a sense of belonging.

States Newsroom: To what degree are information channels, both siloed media on older platforms like, say, Newsmax, and social media like Facebook, responsible for our current predicament. What can be done?

John Horgan: Some news outlets have indisputably fanned the flames of racism, of fear, of intolerance over the years. They must be held to account, and they must be recognized for what they are — vehicles for sedition, subversion and division. They diminish our mental health, our well being, and pit us against each other. They have no place in what America ought to be, and I hope the time has come for us to call them out for what they are — little more than echo chambers of division and bitter acrimony.

Michele Gelfand: They certainly play a role in providing a context for misinformation and threats to propagate. These platforms need a more healthy balance of freedom and accountability.

Jocelyn Bélanger: This is a long-standing issue in the U.S. — the presence of “red and blue media” — that has been shown to intensify partisan attitudes and create a widening chasm between both parties. Social media is also a problem — by design, these platforms are echo chambers where people are selectively exposed to information that confirms and polarizes their own beliefs. As an educator, I think the best weapon we have against disinformation, tribalism, and political polarization is teaching critical thinking. It’s a powerful tool that reduces our ideological blind spots by helping us question, learn and exchange ideas.

This article originally appeared on Ohio Capital Journal on February 8, 2021 with the headline “How do we de-radicalize? Three experts in political extremism and violence share ideas“.